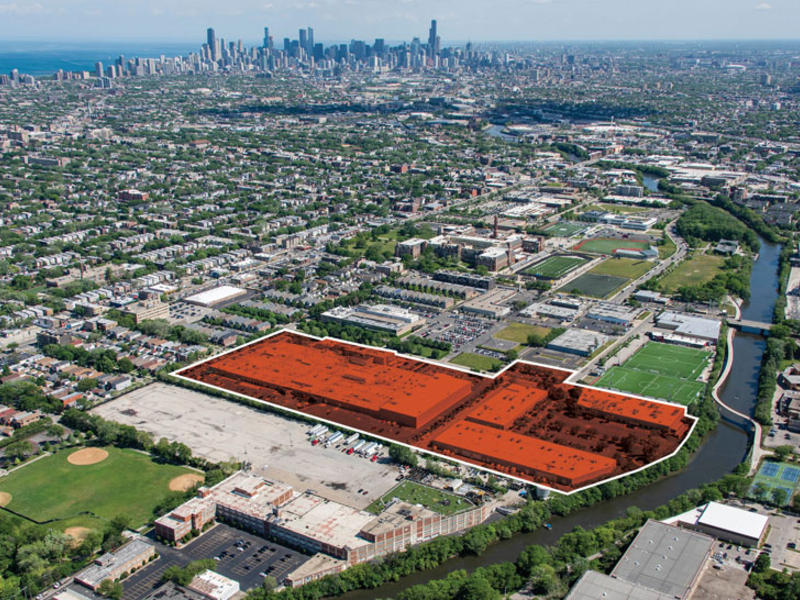 It’s a rare listing of a large industrial site in an affluent, densely populated part of the city, the type of property industrial real estate investors have salivated over—particularly during the COVID-19 pandemic—amid soaring demand for warehouse space to store and distribute products people buy online. Industrial giant Prologis in March paid nearly $100 million for a 339,000-square-foot warehouse and office building at 930 W. Evergreen Ave. on Goose Island.

Like that property, Bradley Business Center is flush with tenants at almost 96 percent leased, according to a Cushman marketing flyer, with users including RCN of Chicago, several medical offices and a mix of recreational businesses such as IK Gymnastics, Windy City Ninjas and Goldfish Swim School.

The 466,871 square feet of buildings on the property collectively generate $5.9 million in annual net operating income, according to the flyer. A sale north of $220 per square foot would tower over the prices paid the last time different parcels of the site traded.

The owners paid $8.3 million in 2006 for what was then a vacant three-building portfolio on the western portion of the site, Cook County property records show. They spent the next five years—including weathering the Great Recession—bringing the buildings to 100 percent leased, according to Rick Hansen, principal of commercial real estate brokerage Hansen Realty. The venture most recently refinanced the 152,000-square-foot western property with a $14 million mortgage, property records show.

A separate joint venture involving Centrum and the Hansen brothers paid $6.3 million in 2010 for the 355,000-square-foot building at 2500 Bradley Place on the eastern portion of the property, records show. Hansen said the building had one primary tenant at the time that has since moved out, but the owners have leased up almost all of the property today among 13 tenants. Records also show the owners most recently refinanced the building with a $23.4 million loan.

Hansen estimated the owners have spent more than $40 million on capital improvements at the buildings during their ownership tenure, with projects ranging from roof renovations and new electrical and heating and cooling systems to the addition of a rooftop deck and upgrade of an underground parking garage.

Hansen said the owners are testing the market to gauge investor interest and that “if a number makes sense for us to sell, we’re going to sell,” he said. “And if it doesn’t, we’re just going to keep it.”

Cushman is playing up the steady cash flow from tenants as well as the potential to develop the campus with larger buildings, as the site’s current zoning allows for as much as 1.6 million square feet of development. The brokerage is also framing the property as a prime candidate to be converted into a last-mile distribution center while demand for such warehouse space is rampant.

Cody Hundertmark and Tom Sitz of the capital markets team in Cushman & Wakefield’s Chicago office are representing the owners.

The number of international homebuyers declined sharply throughout the United States in the past year amidst the global COVID-19 pandemic, according … END_OF_DOCUMENT_TOKEN_TO_BE_REPLACED

Tom Rodeno, 50, a 20-year veteran in representing industrial spaces for Colliers International, based out of the Rosemont office with the title of … END_OF_DOCUMENT_TOKEN_TO_BE_REPLACED

Chicago’s city officials move the deadline for submitting a proposal for the planned casino to October 29, looking for more bidders. Chicago … END_OF_DOCUMENT_TOKEN_TO_BE_REPLACED

A community in western Illinois has officially disbanded its police department over budget concerns. East Galesburg has been without its police … END_OF_DOCUMENT_TOKEN_TO_BE_REPLACED

The officer who died was the first Chicago cop shot and killed in the line of duty this year, Brown said. It's the first line-of-duty shooting … END_OF_DOCUMENT_TOKEN_TO_BE_REPLACED