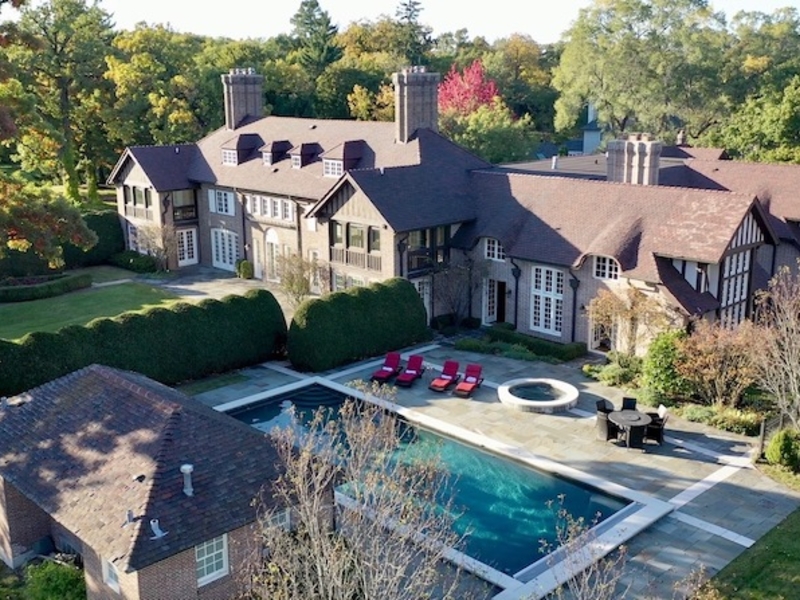 Sellers Neil and Jane Cummins put Twin Gables on the market in March 2017 at $7.5 million.

They paid $4.65 million for the estate in 2009 and made upgrades that they said in 2017 included a four-car coach house with a one-bedroom apartment upstairs, a brick garden wall encircling the entire estate, and planting 150 full-grown trees.

Those items alone seem likely to have cost more than the $350,000 gap between what the Cumminses paid for the property in 2009 and what they sold it for today.

The Cumminses could not be reached. Their listed home phone number has been disconnected. Neil Cummins is not listed on the website of the firm where he was chairman in 2017, Chicago-based Oak Ridge Investments, and the media representative at the firm did not immediately respond to an email asking whether Cummins is still at the firm.

Nicole Oertel, who represented the property with fellow Compass agent John Oertel, declined to comment on whether the Cumminses profited in the sale.

Ann Lyon, the @properties agent who represented the buyers, did not respond to a request for comment. The buyers are not yet identified in public records.

The question of whether the sellers profited is significant because they were the third owners in 22 years to undertake lavish restoration of the property and the first to fully complete it. The Cumminses bought it from Norstates Bank after that lender’s 2007 foreclosure on developers who had it on the market at almost $12 million.

Those developers bought it in 2003 from a previous owner whose renovations and tree-planting plans didn’t get finished.

Originally built for Chicago banker Orville Babcock and designed by architect H. T. Lindebergh, the home was owned by the meatpacking Armour family from 1913 until it was sold to Mr. T for $1.7 million in 1986. Although the Chicago-born “A-Team” star’s real name is Laurence Tureaud, the official deed documents on file in Lake County refer to him as “T., Mr.”

Blaming the trees for inflaming his allergies. Mr. T took a chainsaw to more than 100 oaks on his property, attracting national media attention to what became known as the “Lake Forest Chainsaw Massacre” and suggesting that his TV character’s name, B.A. “Bad Attitude” Baracus, may have been apt for the actor himself.

In 1993, Mr. T deeded the estate to his girlfriend, Phyllis Clark, who sold it in 1999 for $2.4 million. The couple who bought it from Clark, Robert and Christine Shaw, were the first of three owners to launch the rehab the Cumminses completed.

The number of international homebuyers declined sharply throughout the United States in the past year amidst the global COVID-19 pandemic, according … END_OF_DOCUMENT_TOKEN_TO_BE_REPLACED

Tom Rodeno, 50, a 20-year veteran in representing industrial spaces for Colliers International, based out of the Rosemont office with the title of … END_OF_DOCUMENT_TOKEN_TO_BE_REPLACED

Chicago’s city officials move the deadline for submitting a proposal for the planned casino to October 29, looking for more bidders. Chicago … END_OF_DOCUMENT_TOKEN_TO_BE_REPLACED

A community in western Illinois has officially disbanded its police department over budget concerns. East Galesburg has been without its police … END_OF_DOCUMENT_TOKEN_TO_BE_REPLACED

The officer who died was the first Chicago cop shot and killed in the line of duty this year, Brown said. It's the first line-of-duty shooting … END_OF_DOCUMENT_TOKEN_TO_BE_REPLACED