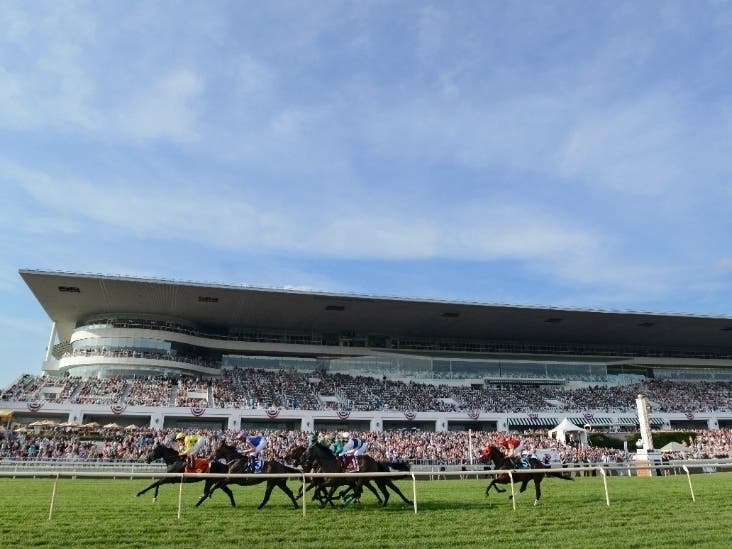 ARLINGTON HEIGHTS, IL — In the midst of what may be the final season of horse racing at Arlington International Racecourse, the owners of the racetrack indicated Tuesday that a sale may be imminent. At least one interested party is betting on the Sport of Kings.

Roy Arnold, a former president of Arlington Park, is fronting a consortium hoping to buy the racetrack and continue to run horses there, reports Bloodhorse.com. Arnold is the CEO and president of Endeavor Properties LLC, a hospitality real estate group based in Wichita, Kansas. For the Arlington bid, Endeavor would partner with Sterling Bay, a developer of office properties in downtown Chicago. The consortium also includes Ocean Atlantic and GSP Development, as well as “high net worth individuals,” reports Bloodhorse.

As of Wednesday morning, the Endeavor group is the only entity to announce its plans to buy Arlington publically. In addition to preserving horse racing, the bid reportedly includes the construction of an arena to host a minor league hockey team, a low-density housing development with approximately 300 units and a 60-acre industrial space. The hockey arena would be an anchor tenant as part of a 60-acre, four-season entertainment district, reports Bloodhorse.

A deadline to submit proposals to Churchill Downs Inc., the owners of Arlington, passed Tuesday with the future of the racetrack property yet to be determined. The Kentucky-based company put the 326-acre property up for sale in February.

“We are committed to close and continuous alignment with the community to ensure that this development enhances residents’ quality of life, creates jobs and economic activity, and benefits the community while improving the tax base of the Village of Arlington Heights and the State of Illinois,” Arnold said in a statement.

REMINDER: Only THREE weeks until our grand finale fireworks show! There are limited tickets still available, but will sell out soon! pic.twitter.com/wCuKBDdner
— Arlington International (@Arlington_Park) June 12, 2021

A 68-day race meet, which kicked off at the beginning of May, continues at Arlington. The property is considered the flagship racetrack for horse racing in Illinois.

Last month, the Village of Arlington Heights unanimously approved a resolution and ordinance that indicated a desire to have horse racing remain at the racetrack.

“We [the board] are looking to put the property at its highest and best use. Everything remains on the table,” Mayor Tom Hayes said May 3. “We are taking these actions this evening to ensure that the possibility of horse racing remains on the table. Nothing is excluded at this point other than certain uses that we don’t want to see there.”

The passed ordinance — an amendment to Chapter 8 of the municipal code — prevents Churchill from selling the property to owners that would potentially bar future gaming and horse racing at the location. CDI is reportedly hoping to relocate Arlington’s racing license to another community in the Chicagoland area or elsewhere in the state.

CDI released a brief statement Tuesday following a 5 p.m. bid proposal deadline, stating it has “strong proposals from numerous parties,” reports the Daily Herald. CDI and Chicago real estate broker CBRE will now evaluate the proposals, and “provide an update on the sale process at the appropriate time in the coming weeks.”

Future Home Of The Bears?

A number of rumors have circulated in recent months, including moving the Chicago Bears to the Arlington Heights property. A move to the suburbs for the professional football team has been bandied about for decades, but Chicago Mayor Lori Lightfoot said the team has a lease with Soldier Field through 2033 and the NFL “doesn’t let teams break their leases.”

When a fire decimated the grandstand and clubhouse at the old Arlington Park in 1985 — closing the racetrack for several years — Bears President Michael McCaskey and Richard Duchossois, owner of Arlington at the time, discussed the possibility of building a stadium at the site. That didn’t come to fruition, and the racetrack fully reopened for horse racing in 1989 with a new name, Arlington International Racecourse.

Soldier Field, located near Chicago’s South Side, opened in 1924 and is the NFL’s oldest stadium. The Bears began playing there in 1971 after leaving Wrigley Field. It has a football capacity of 61,500 fans.

“Arlington’s ideal location in Chicago’s northwest suburbs, together with direct access to downtown Chicago via an on-site Metra rail station, presents a unique redevelopment opportunity,” CDI CEO Bill Carstanjen said earlier this year. “We expect to see robust interest in the site and look forward to working with potential buyers, in collaboration with the Village of Arlington Heights, to transition this storied location to its next phase.”

The number of international homebuyers declined sharply throughout the United States in the past year amidst the global COVID-19 pandemic, according … END_OF_DOCUMENT_TOKEN_TO_BE_REPLACED

Tom Rodeno, 50, a 20-year veteran in representing industrial spaces for Colliers International, based out of the Rosemont office with the title of … END_OF_DOCUMENT_TOKEN_TO_BE_REPLACED

Chicago’s city officials move the deadline for submitting a proposal for the planned casino to October 29, looking for more bidders. Chicago … END_OF_DOCUMENT_TOKEN_TO_BE_REPLACED

A community in western Illinois has officially disbanded its police department over budget concerns. East Galesburg has been without its police … END_OF_DOCUMENT_TOKEN_TO_BE_REPLACED

The officer who died was the first Chicago cop shot and killed in the line of duty this year, Brown said. It's the first line-of-duty shooting … END_OF_DOCUMENT_TOKEN_TO_BE_REPLACED