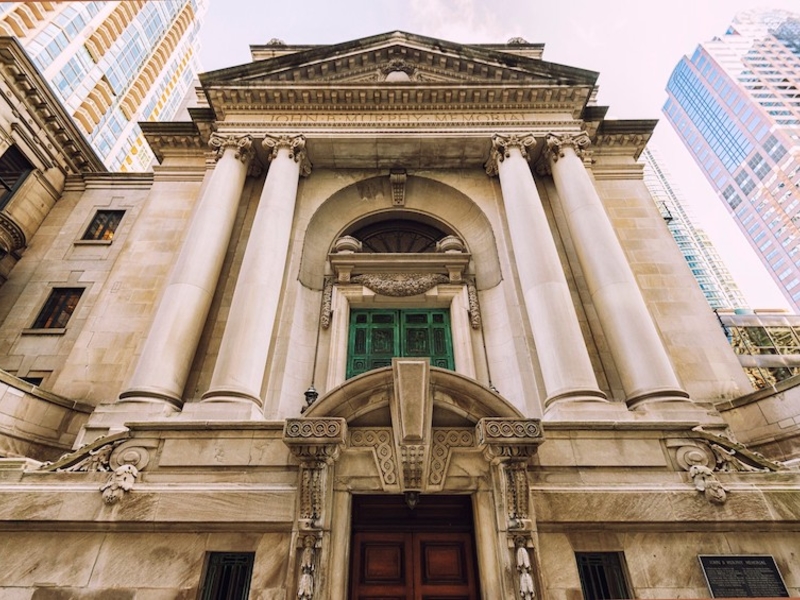 The six-story, 32,000-square-foot Murphy building has been owned since it was built in 1926 by the American College of Surgeons, which originally used it for conferences about surgical methods. The college, whose offices are a few blocks away, has primarily operated the building as a rental venue for the past two decades.

“The Driehaus Museum is honored to succeed the American College of Surgeons as steward of their magnificent building,” Zachary Lazar, president of the board of trustees of the Richard H. Driehaus Museum, said in prepared comments announcing the sale. “It was no secret within the museum that Mr. Driehaus hoped someday to acquire the Murphy Auditorium, an extension of his passion for preserving the world-class historic architecture for which Chicago is so well known.”

Richard Driehaus had a long list of preservation projects, including his Lake Geneva mansion Glanworth Gardens, and he funded awards for preservation at both the national and state level.

“We owe ACS our thanks for their excellent oversight and care of this irreplaceable property,” Lazar said, “and are only sorry that Mr. Driehaus’ untimely passing means he did not have the opportunity to celebrate with us.”

David B. Hoyt, executive director of the ACS, said, also in prepared comments, that “we could not have found a better buyer than the Driehaus Museum. It is an important legacy to have the building remain part of Chicago’s unique architectural fabric now and for years to come.”

The Driehaus Museum will use the Murphy building for programming, according to the press release.

The Murphy auditorium bears the name of an abdominal surgeon whom one of the founders of the Mayo clinic described as “the surgical genius of our generation,” in the late 19th and 20th centuries. John B. Murphy, who was an innovator in appendectomy, gallbladder surgery, repairing gunshot wounds and other procedures, was a founder of the American College of Surgeons.

Murphy, who practiced medicine in Chicago for all but a year of his 40-year medical career, was a professor of surgery at three Chicago medical schools at once: Northwestern, Rush and the College of Physicians and Surgeons (which later became the University of Illinois College of Medicine).

In 1912, when former President Theodore Roosevelt was shot in Milwaukee, he was taken to Chicago’s Mercy Hospital, where Murphy performed the surgery that may have saved Roosevelt’s life.

Murphy died in 1916, and the college built the auditorium in his memory a decade later.

The number of international homebuyers declined sharply throughout the United States in the past year amidst the global COVID-19 pandemic, according … END_OF_DOCUMENT_TOKEN_TO_BE_REPLACED

Tom Rodeno, 50, a 20-year veteran in representing industrial spaces for Colliers International, based out of the Rosemont office with the title of … END_OF_DOCUMENT_TOKEN_TO_BE_REPLACED

A community in western Illinois has officially disbanded its police department over budget concerns. East Galesburg has been without its police … END_OF_DOCUMENT_TOKEN_TO_BE_REPLACED

The officer who died was the first Chicago cop shot and killed in the line of duty this year, Brown said. It's the first line-of-duty shooting … END_OF_DOCUMENT_TOKEN_TO_BE_REPLACED