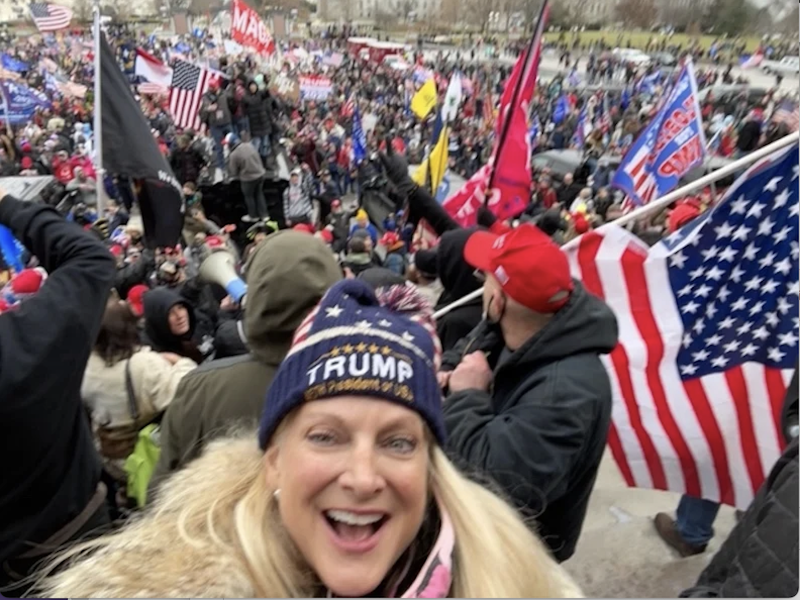 On Jan. 7, the day after the riot, Andrews told Crain’s she went to Washington “to support my president, but I never saw anything destructive taking place.” Her description that day indicated she was on the opposite side of the building, the east side, from where the rioters broke in.

Andrews told Crain’s in January that she only learned of the Capitol breach later that night, when she was back at her hotel. In the lawsuit, her attorneys says she did not participate in any of the damage to the Capitol, threats to other people or unlawful entry into the Capitol.

While outside the Capitol, the lawsuit says, Andrews “engaged in right of association and free speech as guaranteed by the First Amendment.”

Because MSNBC included her name and photo among those charged in connection to the riot, the lawsuit says, “Libby has suffered substantial and perpetual reputational, emotional and
financial harm in the northern district of Illinois.”

@properties fired Andrews, who had been part-time with the brokerage, the morning of Jan. 7 and issued a statement that day that said it had “received a tremendous amount of outreach over the past several hours making us aware of the actions of one of our agents, who acknowledged on social media that she ‘stormed the Capitol’ yesterday in Washington, D.C. @properties unequivocally condemns these actions, and the company has severed ties with this agent effective immediately.”

MSNBC’s broadcast a few days later that indicated Andrews was among the people charged, the suit says, is “now forever a part of the historical internet record and will haunt and taint Libby for the remainder of her natural life and forever impugn her reputation.”

The number of international homebuyers declined sharply throughout the United States in the past year amidst the global COVID-19 pandemic, according … END_OF_DOCUMENT_TOKEN_TO_BE_REPLACED

Tom Rodeno, 50, a 20-year veteran in representing industrial spaces for Colliers International, based out of the Rosemont office with the title of … END_OF_DOCUMENT_TOKEN_TO_BE_REPLACED

Chicago’s city officials move the deadline for submitting a proposal for the planned casino to October 29, looking for more bidders. Chicago … END_OF_DOCUMENT_TOKEN_TO_BE_REPLACED

A community in western Illinois has officially disbanded its police department over budget concerns. East Galesburg has been without its police … END_OF_DOCUMENT_TOKEN_TO_BE_REPLACED

The officer who died was the first Chicago cop shot and killed in the line of duty this year, Brown said. It's the first line-of-duty shooting … END_OF_DOCUMENT_TOKEN_TO_BE_REPLACED