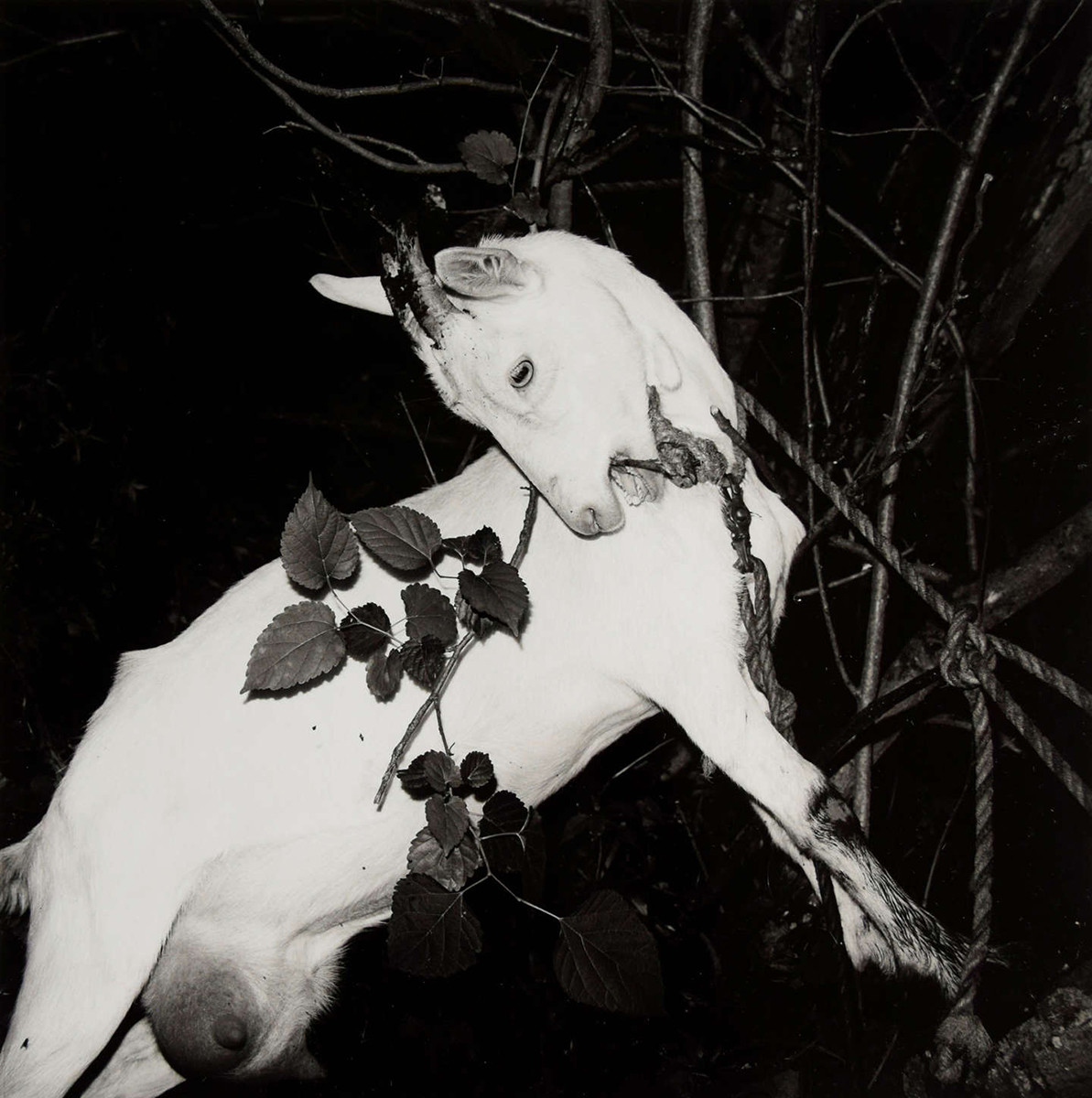 A light at the end of the Covid tunnel? by John Devos

This weekend from Thursday 13th May till Sunday 16th May Antwerp becomes once again a city full of Art – Here a selection of a few photographic initiatives – this list is incomplete but consider it an invitation to discover all the wonderful exhibitions!

Issei Suda (1940-2019) is a famous name in the Japanese photography world, but his work is relatively unknown in Europe. FOMU wants to change this with this first major retrospective outside Japan. In almost sixty years, Suda has built up an idiosyncratic oeuvre with often surrealist images. He develops his own and consistent visual language, characterized by the square format and the high-contrast black-and-white prints. Everyday reality takes on an enchanting shine through his lens.

MOUS LAMRABAT – WE GONNA BE ALRIGHT

Hope and beauty are central to Mous Lamrabat’s work. His photos are absurd and surreal, sometimes subtly provocative, but always colorful and playful. Lamrabat winks at icons from the fashion world and juggles with symbols from popular and North African culture. He creates a unique visual universe in which he combines traditional garments and impressive attributes.

Dirk Braeckman, Bieke Depoorter, Boris Mikhailov, Max Pinckers, Annemie Augustijns, David Claerbout, Jacques de Lalaing, Kimbei Kusakabe, Zanele Muholi, Vincent Delbrouck… These are just a few of the photographers from whom FOMU has purchased work for its collection over the past 10 years.

‘re-collect’ takes you on an associative walk through a decade of collection of acquisitions. We opt for a non-chronological arrangement, which creates new connections between the works. Three focus points run through the collection acquisitions as the common threads: a focus on Belgian photographers, on internationally socially relevant photography and a clear connection with our exhibitions. At the same time, the exhibition offers a glimpse into the collection’s past, present and future.

Lothar Wolleh (Berlin, 1930 – London, 1979) is a German photographer who became well-known primarily because of his intensive contacts in the international avant-garde art scene. From 1963 to 1979, he portrayed dozens of prominent artists, the first of whom was Lucio Fontana.

Based in Düsseldorf, the young photographer first concentrated on the Rhineland art scene, portraying artists such as Günther Uecker (1963), Otto Piene (1964) and Gerhard Richter (1966), without however losing sight of European icons such as René Magritte (1967). His work has such intensity and character that his photographs have often become the most frequently used portraits of his portrayed subjects.

Wanda Tuerlinckx, a Belgian photographer based in Amsterdam, has created a fascinating series on ‘Androids’. Since 2015 and in collaboration with Prof. Erwin R. Boer, professor of Cognitive Robotics at Delft University of Technology, Tuerlinckx has traveled the world, mostly to Japan, to document the current robot revolution. Today’s industrial revolution gives us, for the first time in history, the opportunity to give a physical and perhaps even a spiritual shape to our inexhaustible imagination. Until recently, we were only able to create Humanoids, a human-shaped robot. Since Humanoids do not give us the sense of human identity, they are fairly quickly accepted in our society. However, the Android robots, that look like humans with human emotional facial expressions and movements, are sometimes fascinating but also terrifying as subtle imperfections in appearance make them seem eerie.

In connection with the large retrospective exhibition in FoMu Antwerp of Issei Suda’s works that starts on 7 May, we would like to present works by this very talented, but undervalued, Japanese photographer, who sadly died in 2019. In a small exhibition that starts on the first day of the Antwep Art Weekend (13 May) until 6 June, visitors can get further acquainted with the very recognisable style in which this street photographer recorded daily life in Japan over a period of nearly 60 years. Suda combined a pure appreciation of Japanese customs with a sharp investigative eye.In his most famous series of work, ‘Fushi Kaden’ from 1976, Suda succeeded in capturing the extraordinary that exists within the ordinary.

Gallery FIFTY ONE will surprise its visitors with an unusual pairing of two master photographers: Vivian Maier (US, 1926-2009) and Stephan Vanfleteren (Belgium, 1969). The extraordinary story of Vivian Maier is well known to many: working most of her adult life as a nanny, in her time off, she secretly roamed the streets of New York and Chicago with her Rolleiflex camera around her neck. Hardly anyone knew of her photographic activities, up until 2007, when the Chicago real estate agent John Maloof discovered her work by accident and started to successfully reconstruct and promote her oeuvre.

Vivian Maier’s street photographs – that show us a cross-section of urban life in prosperous mid-century America, with a peculiar interest in people living on the margins of society – have a surprising affinity with Stephan Vanfleteren’s street photography. His penetrating black and white portraits of people from all walks of life made him one of the most well known Belgian photographers of all times.

FIFTY ONE TOO Hofstraat 2 2000 Antwerpen
gallery51.com

FIFTY ONE TOO will show a series of 9 platinum prints by the influential American photographer, moviemaker, graphic designer and painter William Klein (born 1928, lives and works in Paris, France). The exhibition features some of the most well known fashion images that this ‘enfant terrible of photography’ made on commission for Vogue magazine. The platinum printing process – known for its exceptional quality and beauty – lends these legendary photographs an unprecedented depth, sharpness and tonal range, spectacular to discover in person.

Daido Moriyama (b. 1938, Osaka) is worldwide known as the father of street photography in Japan and as an avant-garde provocateur. With his black and white photography, he documented the urban life in Tokyo at the time of the postwar Japanese cultural shift of the 1960s and ’70s, as traditional values eroded in the face of strengthening American influences. Referring to Jack Kerouac’s On the Road as his great influence, Moriyama inherited the philosophy of a ceaseless vagabond, who roams Japan and stalks its streets for unexpected encounters. Characterized by a raw a gritty gaze, his work pushes photography to its limits, showcasing a dark side of Japanese city life, amongst the chaos of everyday existence. His photographs focus on what is discarded, odd, and erotic, often looking predatory and yet being saturated by a melancholic beauty of life at its most ordinary.

Coppejans Gallery presents a duo exhibition from May to July with work by Joseph Beuys (Krefeld, 1921-1986) and the photographer Lothar Wolleh (Berlin, 1930-1979). Under the title “Wer nicht doen will, fliegt raus!” the intensive collaboration between the two German artists is highlighted.

The archives of the Lothar Wolleh Foundation in Berlin contain more than 900 negatives depicting Beuys. On these images, now known worldwide, we see the artist in all his facets: Beuys as a performer, educator, researcher, activist and visual artist. At the same time, the portraits also show the essential elements in Wolleh’s work as a photographer: intuition and interaction. In the exhibition, precisely these core characteristics of both artists are related to each other on the basis of multiples and original objects by Beuys and analogue photos by Wolleh. The collaboration between Beuys and Wolleh culminated in 1971 with the preparations and realization of Beuys’ solo exhibition at the Moderna Museet in Stockholm

The childhood home of photographer Karin Borghouts was destroyed by a fire. Despite the feelings of sorrow, chaos and irrevocability, Borghouts became fascinated by the beauty of the devastation left behind. Her intuitive decision to capture the charred interior at that moment has led to a series of haunting and moving images. On the occasion of this exhibition, a new photography book The house is published.

the skin does not lie:
it’s a person’s age map;
it’s the paper where his choices, failures, passions, fears are written on.
the body defines ourselves, it stratifies and heals passing of time under veils, blankets and hidings. as the trunk to the trees.

Take it, trace it, map it
Remember

Lansink interconnects these very feminine images with close up of traces from Mother Nature where human intervention has left deep impact. Contemplating if we better not intervene with these natural processes of ageing but instead show respect and embrace its outcome.

Within the framework of the citywide event Antwerp Art Weekend, Ballroom Project provides an opportunity for non-Antwerp galleries from Belgium and the Netherlands to be present through a creative, dynamic and artistic platform.  This year, Ballroom Project will take place in ‘BORGERHUB’, the former Borgerhout courthouse, situated in an elegant mansion in the district’s main street. Within walking distance of the central train station, this vibrant district houses several important and upcoming players in the contemporary art scene. The exhibition space itself has an intimate but open character that above all exudes a distinctive ‘out-of-the-box’ impression.

Ballroom Project wants to avoid the typical ‘art fair’ feeling. The concept therefore does not work with separate stands, but with a curator who, based on the submissions received from the participating galleries, works out an exhibition concept tailored to the specific dynamics of the exhibition space.
Ballroom Project is an initiative of Ida Wollens (DMW Gallery) and Bart Vanderbiesen (Base-Alpha Gallery), and is curated by Yirka De Brucker.

As a visual artist, Anne Geene (NL, 1983) captures the hidden beauty of plants and animals. With the help of photography, Geene investigates, collects and organises the world around her. The camera objectively records the materials in which Geene is looking for visual similarities, patterns and phenomena. Eventually her findings are analysed and cataloged according to an apparent logic. Her interpretation of the data is strictly personal and refers to our ure to regulate and understand the world around us. The presented project at Ballroom #3 is a site-specific work, created during an artist in residency in Portugal this year. From September 2021, Kröller-Müller Museum will hold a solo show by Anne Geene. For this exhibition, Geene takes an envious look at the collection method of Helene Kröller-Müller, the museum’s founder.

I certainly will visit:

a new solo exhibition by Luc Tuymans. For this exhibition the artist created seven monumental paintings and an animation film. Numbers are an important motive in this exhibition. Last year Luc Tuymans spoke to Artforum about his interest in numbers: “In the past, I would cut out numbers and glue them to the surfaces of my paintings, enumerating the canvases from one to ten before starting over again. I saw these numbers as a reality that contrasted with the fictional character of what the painting itself depicted. During these days of pandemic, numbers have taken on a different meaning: On one hand, they portray the idea of piling up; on the other, they imply a countdown to an end.”

The number of international homebuyers declined sharply throughout the United States in the past year amidst the global COVID-19 pandemic, according … END_OF_DOCUMENT_TOKEN_TO_BE_REPLACED

Tom Rodeno, 50, a 20-year veteran in representing industrial spaces for Colliers International, based out of the Rosemont office with the title of … END_OF_DOCUMENT_TOKEN_TO_BE_REPLACED

Chicago’s city officials move the deadline for submitting a proposal for the planned casino to October 29, looking for more bidders. Chicago … END_OF_DOCUMENT_TOKEN_TO_BE_REPLACED

A community in western Illinois has officially disbanded its police department over budget concerns. East Galesburg has been without its police … END_OF_DOCUMENT_TOKEN_TO_BE_REPLACED

The officer who died was the first Chicago cop shot and killed in the line of duty this year, Brown said. It's the first line-of-duty shooting … END_OF_DOCUMENT_TOKEN_TO_BE_REPLACED