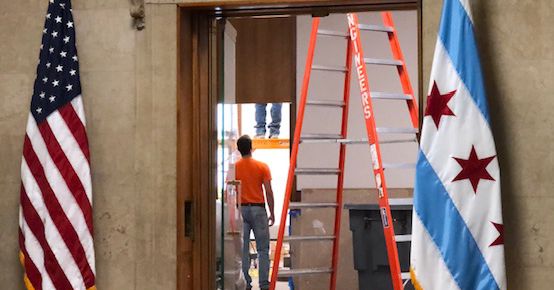 So were Water Management Commissioner Randy Conner, who resigned in late December; Family and Support Services Commissioner Lisa Morrison Butler, who stepped down in February, and Sydney Roberts, head of the Civilian Office of Police Accountability, who was forced out last week after Lightfoot publicly ridiculed the slow pace of COPA investigations.

Chicago Public Schools CEO Janice Jackson, another Emanuel holdover, announced May 3 she would not renew her $300,000-a-year contract. She’s exiting CPS, along with her two top deputies.

Corporation Counsel Mark Flessner, Lightfoot’s longtime friend and former colleague in the U.S. attorney’s office, resigned as part of the fallout from the botched police raid on the home of Anjanette Young.

Lightfoot claimed she didn’t know about Flessner’s attempts to block WBBM-TV (Channel 2) from airing bodycam video of the raid.

Sources said Lightfoot’s chief of staff, Maurice Classen, has told associates he, too, may be preparing to depart City Hall. Lightfoot is already on her third communications director and third press secretary.

Andrea Zopp, yet another Emanuel holdover, stepped down in December from World Business, a public-private job growth agency that will play a major role in rebuilding a Chicago economy decimated by the pandemic and two rounds of looting.

With all of those changes and more, no wonder Lightfoot was somewhat defensive this week when asked about the revolving door at City Hall.

The mayor acknowledged it has been a “difficult year” and “a lot of people are taking stock of where they are” as she approaches the halfway point of her term on May 20.

“I feel very comfortable about where we are as a city, as a mayor’s office. We’ve got great people who are working their tails off every day to service the residents of this great city,” she said.

Ald. Roderick Sawyer (6th), chairman of the City Council Committee on Health and Human Relations, said he has no idea whether there is an “underlying current for the mass exodus.”

It “could be a mid-season correction.” he said. After a short transition tied to the mayoral runoff prompted her to retain much of Emanuel’s cabinet, Lightfoot may also be getting around to choosing her own people.

But Sawyer said he can’t help but wonder whether the mayor’s abrasive management style and propensity to micromanage and publicly criticize some department heads might be making it difficult for her to retain and recruit good people.

“I don’t know how she treats her department heads. But if it’s anything like with us [aldermen], it’s kind of a top-down approach. There’s no collaboration,” Sawyer said.

He added, “When I talked to [COPA chief] Sydney Roberts, she felt stressed and felt there might have been some undue pressure on her, which might have been a contributing factor to her leaving.”

Sawyer doesn’t buy the argument that pandemic fatigue is causing the revolving door at Lightfoot’s City Hall to spin faster.

Departments like Family and Support Services are about to receive a windfall of federal relief funds “they’ve probably never seen before,” he noted.

“I would consider that more of an opportunity as opposed to a hindrance. This is where I would want to be right now.”

Simpson cited three reasons for the heavy turnover: mid-term correction, COVID-19 fatigue and the “works well with others” grade on her report card.

“She gets angry and she speaks out. She has very high standards for what she wants done when and there’ve been crisis after crisis to deal with: the shootings, the pandemic and so forth,” Simpson said.

“I do think there are problems in terms of the mayor’s work with her employees. The demands appear to be too much for some of them.”

The number of international homebuyers declined sharply throughout the United States in the past year amidst the global COVID-19 pandemic, according … END_OF_DOCUMENT_TOKEN_TO_BE_REPLACED

Tom Rodeno, 50, a 20-year veteran in representing industrial spaces for Colliers International, based out of the Rosemont office with the title of … END_OF_DOCUMENT_TOKEN_TO_BE_REPLACED

Chicago’s city officials move the deadline for submitting a proposal for the planned casino to October 29, looking for more bidders. Chicago … END_OF_DOCUMENT_TOKEN_TO_BE_REPLACED

A community in western Illinois has officially disbanded its police department over budget concerns. East Galesburg has been without its police … END_OF_DOCUMENT_TOKEN_TO_BE_REPLACED

The officer who died was the first Chicago cop shot and killed in the line of duty this year, Brown said. It's the first line-of-duty shooting … END_OF_DOCUMENT_TOKEN_TO_BE_REPLACED