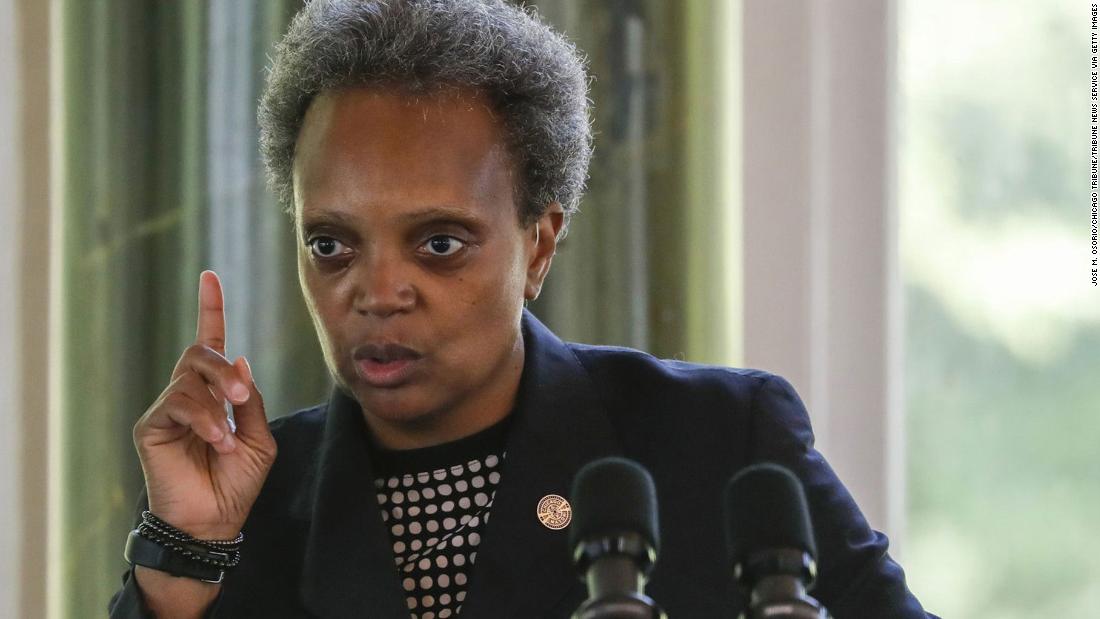 “I ran to break up the status quo that was failing so many. That isn’t just in City Hall,” the mayor tweeted on Wednesday. “It’s a shame that in 2021, the City Hall press corps is overwhelmingly White in a city where more than half of the city identifies as Black, Latino, AAPI or Native American.”

The lack of diversity has long been an issue across the media industry. Nonetheless, journalists of color have questioned Lightfoot’s decision.

Gregory Pratt, a Chicago Tribune reporter who covers the city’s mayor and city council, took issue with the decision, saying politicians should not choose who covers them.

“There are real diversity issues in media,” Pratt told CNN on Thursday. “It’s important newspaper bosses acknowledge and work on it. At the same time, it’s important for government officials to be accessible and answer tough questions from journalists of all backgrounds.”

Pratt, a Latino journalist, tweeted Wednesday that he was granted an interview with the mayor but canceled it after he asked her office to lift their condition and it declined to do so.

In a two-page letter sent to local media outlets and dated May 19, Lightfoot said she has done everything she can to fight for diversity and inclusion during her adult life. Being the city’s mayor makes her “uniquely situated” to shine a spotlight on the issue, she said.

Since her election, the country has faced an “historic reckoning around systemic racism” and it does not appear that media outlets in Chicago “have caught on and truly have not embraced this moment,” Lightfoot said in the letter shared with CNN.

While Lightfoot claimed in her letter there are no female journalists of color covering city hall, Chicago public radio station WBEZ has said two of its three reporters are Hispanic and South Asian women.

Earlier this week, Lightfoot’s office reached out to The TRiiBE — a digital outlet covering Black Chicagoans — and offered its reporters an interview, but city officials did not disclose the decision to limit interviews to Black and Latino journalists, according to Tiffany Walden, the publication’s co-founder and editor in chief.

“We got caught up in the fire of this conversation about Black journalists and when people started implying that the mayor was dodging the hard questions and was taking refuge in the Black community,” Walden told CNN.

A 2018 Pew Research Center analysis shows that more than 75% of newsroom employees are non-Hispanic White people and more likely to be male when compared to workers across the United States.

About 60% of the US population is non-Hispanic White, while 18% is Hispanic, 13.4% is Black or African American and nearly 6% is Asian, according to US Census data.

For Lynn Sweet, Washington bureau chief of The Chicago Sun-Times, the mayor didn’t say anything that newsrooms in the city were not aware of.

“Chicago is a very diverse city. The newsrooms are not,” Sweet said on CNN’s “New Day” on Thursday.

“When you’re a big newsmaker with many interview requests, you pick and choose,” Sweet said. “Some of the outlets that she is talking to today are community outlets that don’t have the resources to staff city hall every day, like the big legacy outlets do, and what’s wrong with that?”

The National Association of Black Journalists said it did not support the mayor’s tactic but acknowledged that her comments shine a “needed spotlight on the call for a greater commitment to diversity, equity and inclusion across the media industry.””This local issue is reflective of what is happening around the country and we continue to work to change the status quo,” the NABJ said in a statement. Meanwhile, the National Association of Hispanic Journalists said the group doesn’t condone restricting press access based on a journalist’s race or ethnicity. “Any action that threatens the cornerstone of our democracy and First Amendment rights is unacceptable. We must take more effective steps to achieve lasting equity in newsrooms and news coverage,” NAHJ tweeted.

Morgan Elise Johnson, publisher of The TRiiBE, said she wants the mayor’s office to regularly reach out to Black and Latino journalists, including them in press conferences and even helping them get funding as small businesses.

“Even if they are reaching out to us, we cannot do much if we don’t have the resources to fund a city hall reporter,” Johnson told CNN.

The number of international homebuyers declined sharply throughout the United States in the past year amidst the global COVID-19 pandemic, according … END_OF_DOCUMENT_TOKEN_TO_BE_REPLACED

Tom Rodeno, 50, a 20-year veteran in representing industrial spaces for Colliers International, based out of the Rosemont office with the title of … END_OF_DOCUMENT_TOKEN_TO_BE_REPLACED

Chicago’s city officials move the deadline for submitting a proposal for the planned casino to October 29, looking for more bidders. Chicago … END_OF_DOCUMENT_TOKEN_TO_BE_REPLACED

A community in western Illinois has officially disbanded its police department over budget concerns. East Galesburg has been without its police … END_OF_DOCUMENT_TOKEN_TO_BE_REPLACED

The officer who died was the first Chicago cop shot and killed in the line of duty this year, Brown said. It's the first line-of-duty shooting … END_OF_DOCUMENT_TOKEN_TO_BE_REPLACED