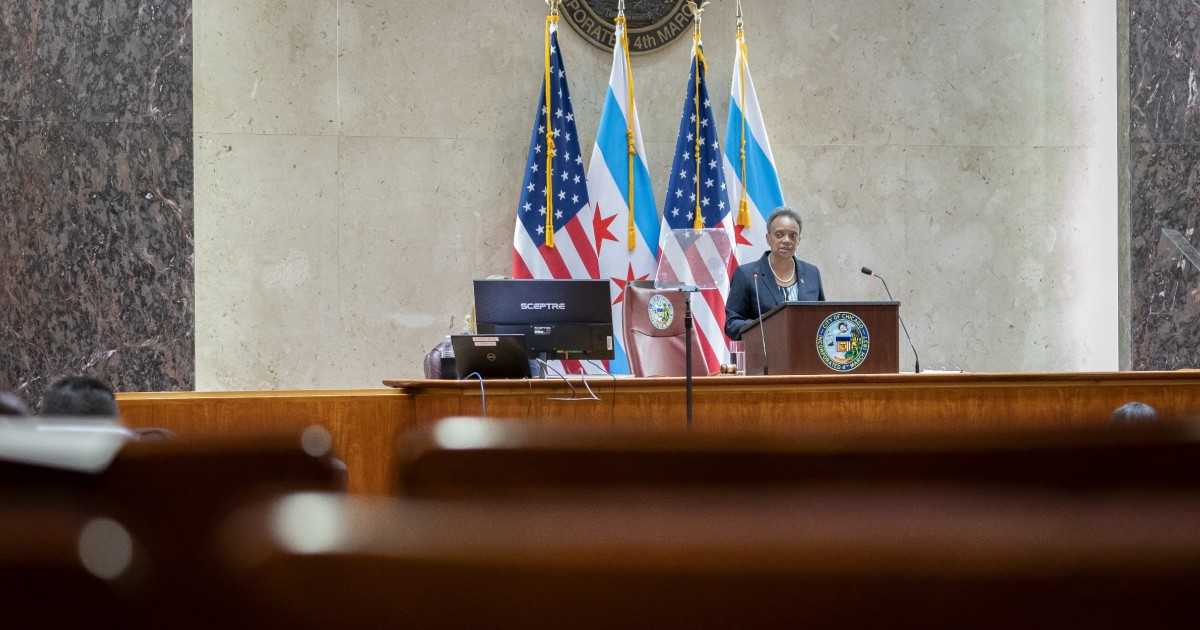 Chaos ensued at Chicago’s City Council meeting today, with aldermen voting to abruptly end their monthly meeting after approving just one item on the agenda.

The parliamentary disorganization has now created a backlog of items awaiting a vote, including whether or not to rename Lake Shore Drive after Jean Baptiste Point DuSable, the Black man credited as the city’s founding father.

The melee also highlighted the growing tensions between Mayor Lori Lightfoot and aldermen that have been simmering for at least a year.

“We’re not really in line with the administration right now, so we got to do better with that,” said Ald. Carrie Austin, 34th Ward.

Last month, the proposal to rename Lake Shore Drive to DuSable Drive got delayed, but according to the Rules of Order, should have been voted on today.

However, before the council could get to it, another disagreement emerged over whether to appoint Celia Meza as the city’s new corporation counsel.

Ald. Raymond Lopez, 15th Ward, and Ald. Jeanette Taylor, 20th Ward, called to defer the appointment. They’ve been requesting the city’s law department settle with Anjanette Young, the social worker whose home was wrongfully raided by Chicago police. The previous corporation counsel resigned in the wake of the scandal.

Meza’s appointment was the first item to be called for a vote and the confusion over the deferral request led to a brief recess, during which Lightfoot and Taylor had a heated discussion in the back of the chambers. Taylor later characterized the conversation as disrespectful.

“Communication works both ways, and I’m not a child,” Taylor said. “I’m a grown woman like she is. We are coworkers and clearly, she doesn’t understand that.”

“I want to work with her. Everybody in the council does,” Taylor continued. “[Lightfoot] wants it to be a one-woman show, and I don’t [have] time for it. Chicago doesn’t have time for it.”

But Lightfoot placed the blame for the City Council’s inability to get much done Wednesday on aldermen.

“Today, a small group of Aldermen brazenly created a spectacle and did a disservice to their constituents, instead of raising their concerns through the appropriate forum,” Lightfoot said in a statement.

But the back-and-forth over whether or not the council would vote on Meza’s appointment or any other items on the agenda, including renaming Lake Shore Drive, prompted the normally quiet Ald. Ed Burke, 14th Ward, to get into an exchange with Lightfoot over whether she was following the City Council’s Rules of Order.

Burke, the long-standing unofficial parliamentarian in City Hall, sought to correct several violations of the Rules of Order, but Lightfoot overruled him. Burke, who is the longest-serving alderman, was removed as chairman of the powerful Finance Committee after federal prosecutors charged him with corruption. He has pleaded not guilty, and the case is ongoing.

The council did manage to approve just one item on the agenda before adjourning early. That was the appointment of Annette Nance-Holt as the next commissioner of the Chicago Fire Department. She is the first Black woman to hold the job.

Aldermen agreed in a narrow vote to meet Friday at 1 p.m. Under normal circumstances, the items that were on today’s agenda would be taken up when they meet again. But Ald. David Moore, 17th Ward, said it’s not clear.

“I mean DuSable Drive is important to me, but right now, I’m more concerned about democracy,” Moore said. “This council is not a council of order anymore. It’s not a council of rules. Everything and anything goes, and I’m sad to say that you’re going to see fireworks.”

Other items awaiting a vote include a midnight curfew on liquor store sales, an overhaul of city business regulations, a $1.825 million legal settlement with five female paramedics who filed a sexual harassment lawsuit in 2018 and $17 million in special development money for several public parks.

The number of international homebuyers declined sharply throughout the United States in the past year amidst the global COVID-19 pandemic, according … END_OF_DOCUMENT_TOKEN_TO_BE_REPLACED

Tom Rodeno, 50, a 20-year veteran in representing industrial spaces for Colliers International, based out of the Rosemont office with the title of … END_OF_DOCUMENT_TOKEN_TO_BE_REPLACED

A community in western Illinois has officially disbanded its police department over budget concerns. East Galesburg has been without its police … END_OF_DOCUMENT_TOKEN_TO_BE_REPLACED

The officer who died was the first Chicago cop shot and killed in the line of duty this year, Brown said. It's the first line-of-duty shooting … END_OF_DOCUMENT_TOKEN_TO_BE_REPLACED