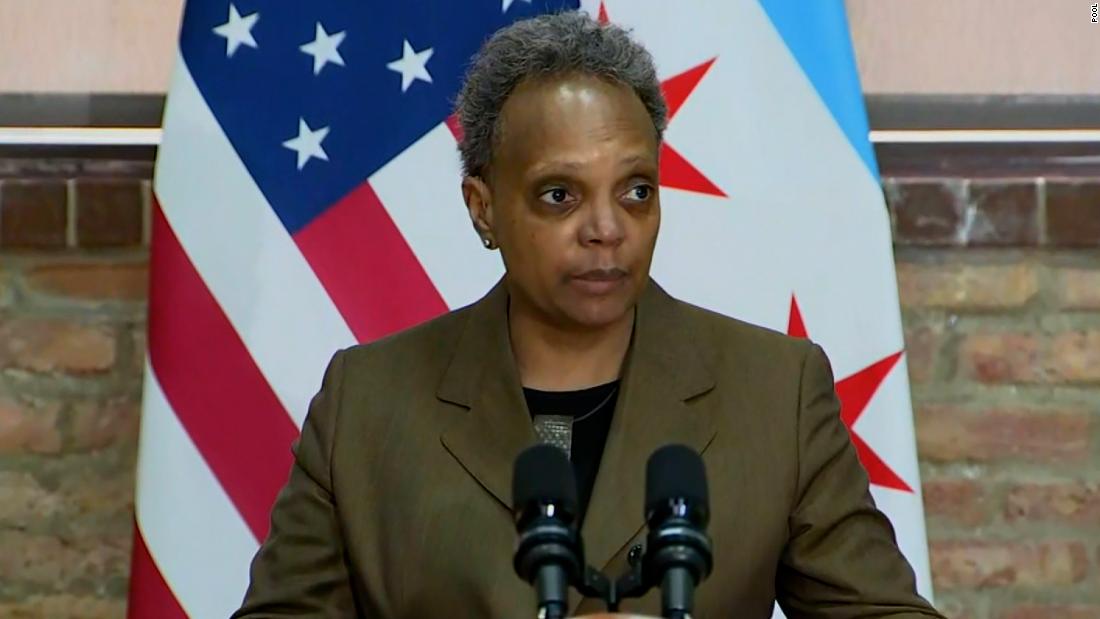 The city is in the midst of another weekend of protests over the actions of police, and Lightfoot is under pressure to back major reforms to a police department facing scrutiny over a series of controversial uses of violence.

“Simply put, we failed Adam. And we cannot afford to fail one more young person in our city,” Lightfoot said ahead of the release of the video by the Civilian Office of Police Accountability, which is investigating the March shooting.

Lightfoot was elected mayor in 2019 as a first-time candidate for office who had recently served as president of the Chicago Police Board. She had chaired the Police Accountability Task Force that had been launched after the 2014 police killing of 17-year-old Laquan McDonald — a shooting that also triggered a federal civil rights probe of the Chicago Police Department.

That task force’s recommendation for a civilian commission to oversee police then became a central plank in Lightfoot’s agenda as she campaigned for mayor.

But, nearly two years into Lightfoot’s tenure, she has not introduced her own plan to create civilian oversight of police — despite having pledged to do so within her first 100 days in office, and despite the idea being a product of the task force Lightfoot once led.

Two police reform advocacy groups have introduced a series of reforms that would allow Chicago voters to decide in a binding referendum whether to hand a civilian oversight board the power to hire and fire the police superintendent, set Chicago Police Department policy and negotiate police contracts.

Lightfoot has balked at that measure, which could strip that authority from the mayor’s office over what’s become the central issue she has faced — and one for which voters would likely hold her responsible.

Members of Chicago’s city council — including those who have been Lightfoot’s allies — expressed frustration that she hasn’t offered a police reform proposal of her own.

Chicago Alderman Gilbert Villegas, who resigned from his role as Lightfoot’s chosen floor leader on the city council in February, said the council should vote on those proposed reforms.

“The reality is, time is of the essence. We’ve been talking about this for decades. The mayor talked about doing this in 100 days, and we’re going on two years. We need to do this now,” he said. “The mayor has had two years to put forward something. She has not. And so given the time that we’re in right now, we need to move on this as soon as possible.”

“As we delay it,” Villegas said, “we’re losing the public’s trust.”

Alderwoman Jeanette Taylor said Lightfoot “definitely has not kept her word when it comes to policing, which is why we’re still in the space where other cities have moved forward to implement reforms and Chicago has not.”

“You can’t expect the police to police the police,” Taylor said. “She is stopping this from getting done.”

Taylor, who has advocated reforms such as eliminating qualified immunity for police and shifting funding from the police department to community organizations, said she doesn’t expect Lightfoot to ultimately back the sort of major reforms she believes the Chicago Police Department needs.

“It’s going to be something watered down and it’s not going to make any sense. It’s not going to come from the people,” Taylor said. “All you’ve got to do is listen to the organizations. They’ve done the research, they’ve lived it, they’ve got the proof.”

Lightfoot’s office did not respond Friday to questions about her position on the advocacy groups’ proposal, or when she’ll release her own proposal.

The Chicago Sun-Times reported that she had addressed the issue in March during a virtual panel on criminal justice reform sponsored by the University of California, Berkeley.

“This is going to be one of most important policy decisions that is made by the city of Chicago in decades. … Really recalibrating the relationship between the people and the police,” Lightfoot said then.

“We’ve got to get this right … so we are actually setting these proposals up for success and not failure,” she said.

The fallout from the shooting of Toledo is the latest in a series of controversies Lightfoot has faced over police actions in her nearly two years in office.

In summer 2020, Lightfoot repeatedly ordered the bridges that provide access to downtown Chicago raised at night after protests over the Minneapolis police killing of George Floyd were accompanied by property destruction. The move carried heavy symbolism — with critics saying it favored businesses over the rights of the city’s residents — and was part of what the city’s inspector general later described as an overall response that was “marked, almost without exception, by confusion and lack of coordination.” Lightfoot also faced sharp criticism late last year for her administration’s role in attempting unsuccessfully to prevent the release of footage from a botched early 2019 raid in which police targeted the wrong home, leaving Anjanette Young naked and handcuffed as police searched her home.Lightfoot said in December that all officers involved in the raid had been “taken off the street” and placed on desk duty. Mark Flessner, the top attorney for the city’s law department — which reports to Lightfoot and asked a federal judge to stop CNN affiliate WBBM from airing footage of the raid, then later sought sanctions against Young and her attorney — resigned.

She also proposed new policies that would require search warrants to be approved by a deputy chief or higher-ranking official, compared to the current requirement of a lieutenant’s approval, and for new limitations on “no-knock” warrants.

She also drew criticism from some police reform advocates when she dismissed progressive calls to defund the police as a “nice hashtag” and later spent $281.5 million in federal coronavirus stimulus money to cover the Chicago Police Department’s payroll.

In her nearly two years as mayor, Lightfoot has at times acknowledged the different realities of campaigning and governing. She has dropped another centerpiece of her campaign — her support for an elected Chicago school board — and instead is backing a measure Illinois lawmakers are currently considering that would instead allow voters to elect a minority of board members while the mayor continues to appoint the majority.

After a lengthy fight with the Chicago Teachers Union over re-opening schools amid the pandemic, Lightfoot told the New York Times in February that her control of schools was essential, and did not allow unions to “dictate what the state of play was going to be in education.”

“We would never have opened without mayoral control. It’s quite clear,” Lightfoot said.

John Catanzara, the Chicago police union president, on CNN last week defended the officer who shot Toledo and pointed his finger at high schools still not being open for in-person learning.

“If the school doing its job and teaching students in person, maybe a counselor would have been able to reach this kid and the gangs didn’t,” he said.

Lightfoot, 58, is an attorney who worked as a federal prosecutor and in several roles in Chicago’s government before moving into private practice. She returned to a government role in 2015, when then-Mayor Rahm Emanuel appointed her to helm the Chicago Police Board and later as chair of a Police Accountability Task Force. She butted heads with Emanuel, whose efforts to avoid federal oversight of the Chicago Police Department she called “fundamentally flawed,” and resigned in May 2018 before launching her own mayoral campaign as a first-time candidate for office.

In 2020, Lightfoot’s first full year in office, shootings and murders in Chicago rose more than 50%, according to police. That was part of a nationwide trend that police said was related to the coronavirus pandemic and civil unrest. Carjackings also doubled in Chicago in 2020. And as of March 28 of this year, Chicago had 129 homicide cases, about 33 percent more than at the same time in 2020, according to the Chicago Police Department.

Reforms implemented after the McDonald shooting, and as a result of a court-ordered consent decree, have not yet fully been implemented. And the Toledo shooting again left Lightfoot responding to the actions of a police department she had pledged to reform.

Lightfoot acknowledged Thursday that Chicago is “a city that is traumatized by a long history of police violence and misconduct.” Still, she urged people to “wait until we hear all the facts” before making up their minds about the case.

The mayor also said the city needs to do more to combat the availability of guns.

“We must do everything we can also to eliminate the scourge of firearms from our city,” she said. “We have too many damn guns on our streets.”

“Foot pursuits put everyone involved at risk, the officers, the person being pursued and bystanders,” Lightfoot said. “We have to do better, and I charge the superintendent with bringing to me a policy that recognizes how dangerous this is. We can’t afford to lose more lives.”

But her statement didn’t fully grapple with the realities that had infuriated so many in Chicago, including a prosecutor for Cook County State’s Attorney Kim Foxx’s office having implied in court that Toledo was holding a gun in his hand at the time of the shooting when, in fact, Toledo’s hands were empty and raised in the air.

That disparity provoked outrage both in Chicago and across the nation.

“The prosecution said that he had a gun in his hand. He did not,” tweeted Missouri Democratic Rep. Cori Bush, a former Black Lives Matter organizer who marched on the streets of Ferguson in 2014, when the movement began. “How many more Black and brown babies have to die before you realize that the policing system is designed to kill us with impunity?”

Illinois state Rep. Edgar Gonzalez, whose district includes Little Village, where Toledo was shot, put voice to the anger and frustration the 13-year-old’s killing had reignited.

The number of international homebuyers declined sharply throughout the United States in the past year amidst the global COVID-19 pandemic, according … END_OF_DOCUMENT_TOKEN_TO_BE_REPLACED

Tom Rodeno, 50, a 20-year veteran in representing industrial spaces for Colliers International, based out of the Rosemont office with the title of … END_OF_DOCUMENT_TOKEN_TO_BE_REPLACED

Chicago’s city officials move the deadline for submitting a proposal for the planned casino to October 29, looking for more bidders. Chicago … END_OF_DOCUMENT_TOKEN_TO_BE_REPLACED

A community in western Illinois has officially disbanded its police department over budget concerns. East Galesburg has been without its police … END_OF_DOCUMENT_TOKEN_TO_BE_REPLACED

The officer who died was the first Chicago cop shot and killed in the line of duty this year, Brown said. It's the first line-of-duty shooting … END_OF_DOCUMENT_TOKEN_TO_BE_REPLACED