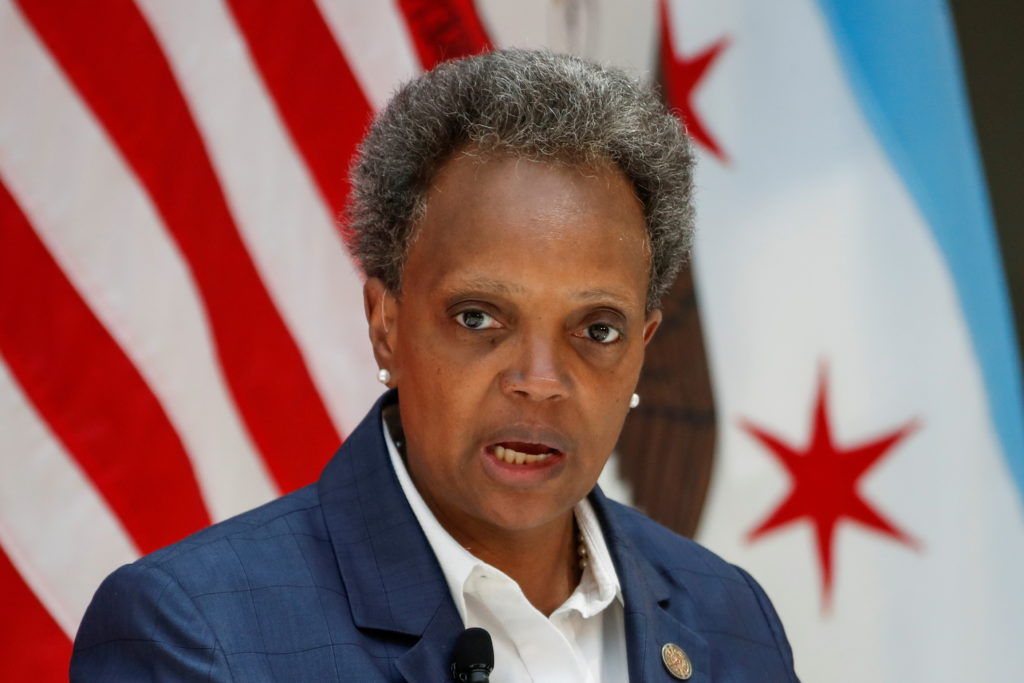 CHICAGO (AP) — Chicago Mayor Lori Lightfoot urged the public Thursday to remain peaceful and reserve judgement until an independent board can complete its investigation into the police shooting of a 13-year-old boy last month.

During a news conference before the promised release of investigation materials, including body camera footage of an officer fatally shooting Adam Toledo on March 29, Lightfoot called on people to keep calm, even as she decried the city’s long history of police violence and misconduct, especially in black and brown communities. Choking up at times, she also said too many young people are left vulnerable to “systemic failures that we simply must fix.”

“This remains a complicated and nuanced story, and we all must proceed with deep empathy and calm and importantly, peace,” she said.

The Civilian Office of Police Accountability, or COPA, said that on Thursday, it would release the bodycam footage of Toledo’s March 29 shooting and other materials pertaining to the investigation, including video captured by a third party, arrest reports and audio recordings of shots being fired in the area that led police to respond.

The board didn’t say what the video shows or give any other information about the investigation.

The planned release comes in the wake of the traffic-stop shooting of Daunte Wright by a an officer in a Minneapolis suburb that has sparked protests as the broader Minneapolis area nervously awaits the outcome of the trial of Derek Chauvin in the death of George Floyd.

In Chicago, police said officers responded to an area of the predominantly Latino and Black neighborhood Little Village on the city’s West Side before dawn on the morning of the shooting after a police technology detected gun shots there. The teen, who was Latino, and a 21-year-old man fled on foot when confronted by police, and an officer shot the teen once in the chest following a foot chase during what the department described as an armed confrontation.

Police said a handgun the boy had been carrying was recovered at the scene. The 21-year-old man was arrested on a misdemeanor charge of resisting arrest.

The review board initially said it couldn’t release the video because it involved the shooting of a minor, but it changed course after the mayor and police superintendent called for the video’s release.

“COPA’s core values of integrity and transparency are essential to building public trust, particularly in incidents related to an officer involved shooting, and we are unwavering in our commitment to uphold these values,” the board said in its statement Wednesday.

Footage of the Adam Toledo shooting has been widely anticipated in the city, where the release of some previous police shooting videos sparked major protests, including the 2015 release of footage of a white officer shooting Black teenager Laquan McDonald 16 times, killing him. The Toledo family urged people to “remain peaceful.”

“We have heard reports in the media that more protests are planned today, and while we have no direct knowledge of such events, we pray that for the sake of our city, people remain peaceful to honor Adam’s memory and work constructively to promote reform,” the family said in a statement.

On Thursday, before the video’s release, Lightfoot and attorneys for the family and city said in a joint statement that they agreed Wednesday that in addition to the release of the video, all investigation materials should be made public, including a slowed-down compilation of what happened that morning.

“We acknowledge that the release of this video is the first step in the process toward the healing of the family, the community and our city,” the joint statement read. “We understand that the release of this video will be incredibly painful and elicit an emotional response to all who view it, and we ask that people express themselves peacefully.”

The Chicago Police Department has a long history of brutality and racism that has fomented mistrust among the city’s many Black and Hispanic residents. Adding to that mistrust is the city’s history of suppressing damning police videos.

The city fought for months to keep the public from seeing the 2014 video of a white officer shooting McDonald 16 times, killing him. The officer was eventually convicted of murder. And the city tried to stop a TV news station from broadcasting video of a botched 2019 police raid in which an innocent, naked, Black woman wasn’t allowed to put on clothes until after she was handcuffed.

The number of international homebuyers declined sharply throughout the United States in the past year amidst the global COVID-19 pandemic, according … END_OF_DOCUMENT_TOKEN_TO_BE_REPLACED

Tom Rodeno, 50, a 20-year veteran in representing industrial spaces for Colliers International, based out of the Rosemont office with the title of … END_OF_DOCUMENT_TOKEN_TO_BE_REPLACED

A community in western Illinois has officially disbanded its police department over budget concerns. East Galesburg has been without its police … END_OF_DOCUMENT_TOKEN_TO_BE_REPLACED

The officer who died was the first Chicago cop shot and killed in the line of duty this year, Brown said. It's the first line-of-duty shooting … END_OF_DOCUMENT_TOKEN_TO_BE_REPLACED