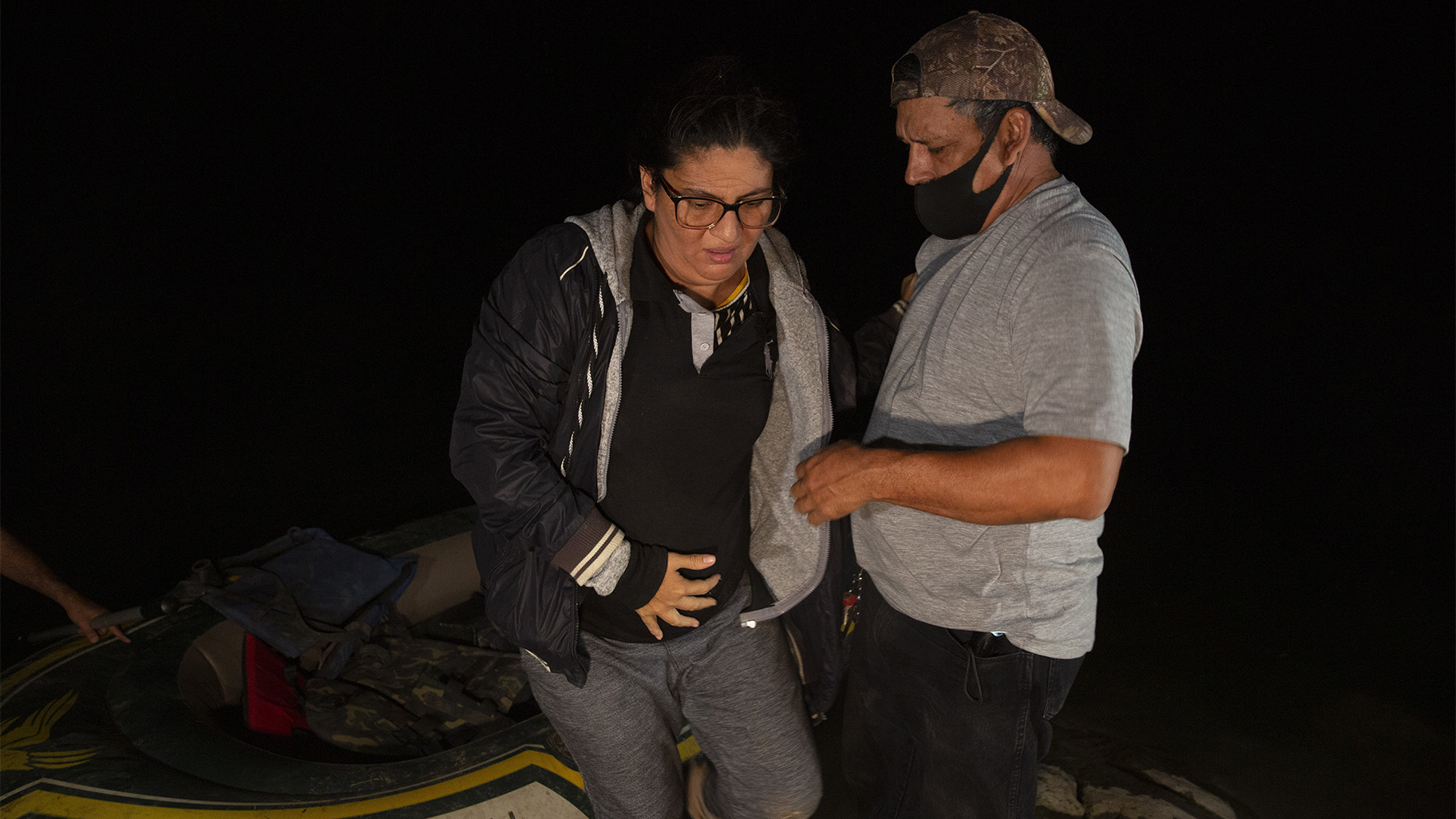 FILE – In this March 30, 2021, file photo Mayra Culio from Guatemala is helped off an inflatable raft by a church volunteer after being smuggled across the Rio Grande river in Roma, Texas. Assailants shot her 7 times at her house and then killed her husband who was ambushed in his car in Escuintla, Guatemala. She is five months pregnant and fled with her extended family March 12 after being treated in the hospital for her bullet wounds. (AP Photo / Dario Lopez-Mills)

The new directive, announced Friday, does not bar Immigration and Customs Enforcement from initiating proceedings to deport women who are pregnant, nursing or have given birth within the past year. But they generally would no longer be detained pending the outcome of their cases except under “exceptional circumstances,” the agency said.

The practice of detaining pregnant migrants has been condemned as a threat to maternal and fetal health by immigrant and women’s advocacy groups critical of medical care at detention centers.

“This reflects our commitment to treat all individuals with respect and dignity while still enforcing our nation’s laws,” acting ICE Director Tae Johnson said.

The change is part of a broader effort by the Biden administration to roll back Trump-era enforcement measures and return to policies resembling those in place under President Barack Obama. ICE recently adopted draft guidelines to focus apprehensions on people in the United States illegally who recently entered the country, pose a national security threat or have committed serious crimes.

While these efforts have angered immigration opponents, the number of people in immigration custody has risen sharply in recent months. There are more than 27,000 people in ICE custody, up from less than 14,000 at the end of March, according to data compiled by the Transactional Research Access Clearinghouse at Syracuse University.

Nearly 80% of those in ICE custody have no criminal record, and a majority of those who do have committed largely minor offenses, according to TRAC.

Advocates praised Friday’s announcement, but said it doesn’t go far enough. The American Civil Liberties Union called on the government to stop detaining anyone who might be at risk in detention. “This action by the Biden administration is a welcome step in the right direction,” said Eunice Cho, a senior staff attorney with the organization.

Under Obama, ICE adopted a policy in August 2016 that pregnant migrants would be presumed eligible for release as their cases made their way through immigration courts.

President Donald Trump ended that policy of presumed release, part of his administration’s heightened immigration enforcement, including arrests of anyone without legal residency regardless of whether they had committed some other offense.

The number of pregnant women detained by ICE increased from 1,380 in 2016 to 2,098, according to the Government Accountability Office.

ICE is required by law to detain some migrants, including foreign nationals who have been convicted of certain crimes or terrorist activity. The agency pledged that the “very limited” number of pregnant women detained under the new policy would receive regular health care as needed and officials would be prohibited from using restraints on them except in “extraordinary circumstances.”

Any child born in the U.S. would automatically have American citizenship.

The number of international homebuyers declined sharply throughout the United States in the past year amidst the global COVID-19 pandemic, according … END_OF_DOCUMENT_TOKEN_TO_BE_REPLACED

Tom Rodeno, 50, a 20-year veteran in representing industrial spaces for Colliers International, based out of the Rosemont office with the title of … END_OF_DOCUMENT_TOKEN_TO_BE_REPLACED

Chicago’s city officials move the deadline for submitting a proposal for the planned casino to October 29, looking for more bidders. Chicago … END_OF_DOCUMENT_TOKEN_TO_BE_REPLACED

A community in western Illinois has officially disbanded its police department over budget concerns. East Galesburg has been without its police … END_OF_DOCUMENT_TOKEN_TO_BE_REPLACED

The officer who died was the first Chicago cop shot and killed in the line of duty this year, Brown said. It's the first line-of-duty shooting … END_OF_DOCUMENT_TOKEN_TO_BE_REPLACED