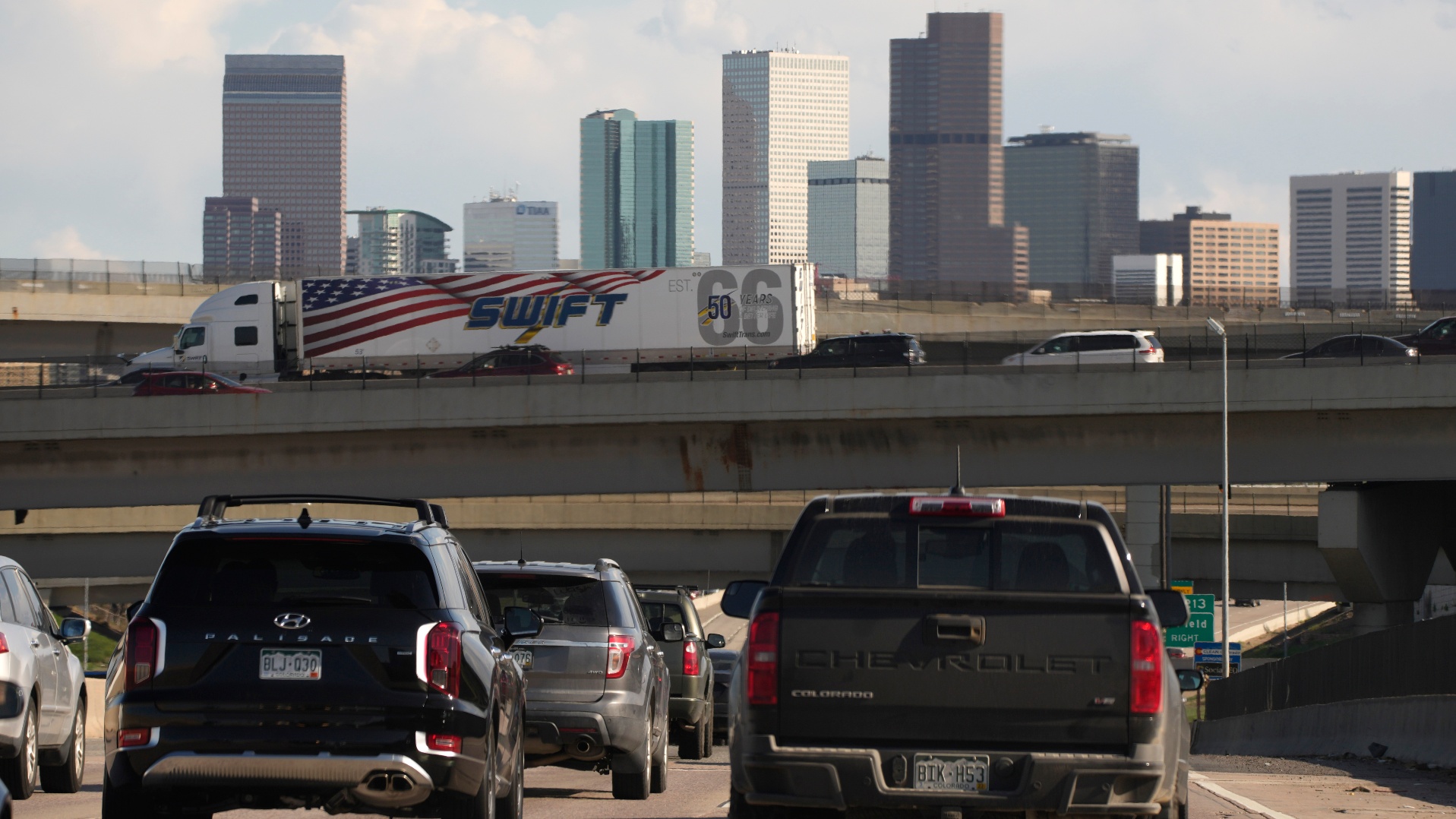 In this May 27, 2021 file photo, vehicles move along southbound Interstate 25 while motorists sit on the Interstate 70 overpass to start the Memorial Day weekend in Denver. (AP Photo / David Zalubowski)


Americans hit the road in near-record numbers at the start of the Memorial Day weekend, as their eagerness to break free from coronavirus confinement overcame higher prices for flights, gasoline and hotels.

More than 1.8 million people went through U.S. airports on Thursday, and the number was widely expected to cross the 2 million threshold over the long holiday weekend — that would be the highest mark since early March 2020.

Homeland Security Secretary Alejandro Mayorkas warned travelers to expect long lines at airports, and on Friday he pleaded with Americans to show some patience.

The rise in travel appears to be fueled by an increase in people vaccinated against COVID-19 and also by an improving economy. The U.S. Commerce Department said consumer spending increased in April, although not as much as in March, providing more evidence that consumers are driving a recovery from last year’s pandemic recession.

The arrival of Memorial Day coincides with some states eliminating their remaining pandemic restrictions amid improving case, hospitalization and death numbers. The mask mandate in Massachusetts goes away Saturday, and Virginia is easing all distancing and capacity restrictions Friday.

President Joe Biden is traveling to Virginia to celebrate the unofficial start of summer and its accomplishments in battling the virus at a time when the state of more than 8 million people is averaging only 360 cases a day.

At Miami International Airport, officials are anticipating about 115,000 passengers per day over the six-day period that ends June 1. Spokesman Greg Chin said the airport numbers are equaling pre-pandemic levels. It’s a similar story in Orlando, where airport traffic is reaching 90% of pre-pandemic levels and people are flocking to theme parks that have recently loosened restrictions.

AAA expects a 60% jump in travel over the same holiday weekend last year, with 37 million Americans traveling at least 50 miles from home, most of them in cars. The auto club and insurer made that forecast even with gasoline prices at their highest levels in seven years — the national average is above $3 a gallon for regular.

Prices for rental cars are up sharply too — if you can find one — after rental companies culled their fleets to survive last year’s deep slump in travel.

“My mother-in-law called me on a vacation and said, ‘Hey, can you get me a rental car?’ I said, ‘No,’” said Jordan Staab, president of SmarterTravel Media. “Demand is up 500% since January and it’s tough to get a rental car right now, so plan ahead as much as you possibly can.”

Hotels and other lodging in beach and mountain areas are expecting bigger crowds than those in urban areas. Lou Carrier, the president of Distinctive Hospitality Group, said the company’s two hotels in tourist towns in Connecticut have seen a jump in bookings since the state loosened its face-mask requirements two weeks ago, but occupancy is still only around 20% at its three hotels in Boston.

Hotel room rates nationally jumped 9% in April after an 8% rise in March, and airfares soared 10% in April, according to the latest available figures from the Commerce Department.

That’s not stopping people from getting on planes. The Transportation Security Administration has screened nearly 1.6 million people a day this month, up from 224,000 a day in May 2020.

Most of those people are traveling for vacations or visiting family and friends in the United States. Airline executives say domestic leisure travel is back to pre-pandemic levels — Delta Air Lines President Glen Hauenstein said this week that bookings are now running ahead of the 2019 pace.

Business travelers and international visitors are still mostly absent, however, and airlines are eager to see that lucrative business return. One proposal for making international travel easier is a so-called vaccine passport — an app that would indicate if a person has been vaccinated or tested against COVID-19.

Mayorkas, the Homeland Security secretary, told ABC Friday that the government is taking “a very close look” at the idea. The airline industry, the European Union and others are scrambling to develop vaccine passports to boost international travel and revive tourism-based economies.

The number of international homebuyers declined sharply throughout the United States in the past year amidst the global COVID-19 pandemic, according … END_OF_DOCUMENT_TOKEN_TO_BE_REPLACED

Tom Rodeno, 50, a 20-year veteran in representing industrial spaces for Colliers International, based out of the Rosemont office with the title of … END_OF_DOCUMENT_TOKEN_TO_BE_REPLACED

Chicago’s city officials move the deadline for submitting a proposal for the planned casino to October 29, looking for more bidders. Chicago … END_OF_DOCUMENT_TOKEN_TO_BE_REPLACED

A community in western Illinois has officially disbanded its police department over budget concerns. East Galesburg has been without its police … END_OF_DOCUMENT_TOKEN_TO_BE_REPLACED

The officer who died was the first Chicago cop shot and killed in the line of duty this year, Brown said. It's the first line-of-duty shooting … END_OF_DOCUMENT_TOKEN_TO_BE_REPLACED