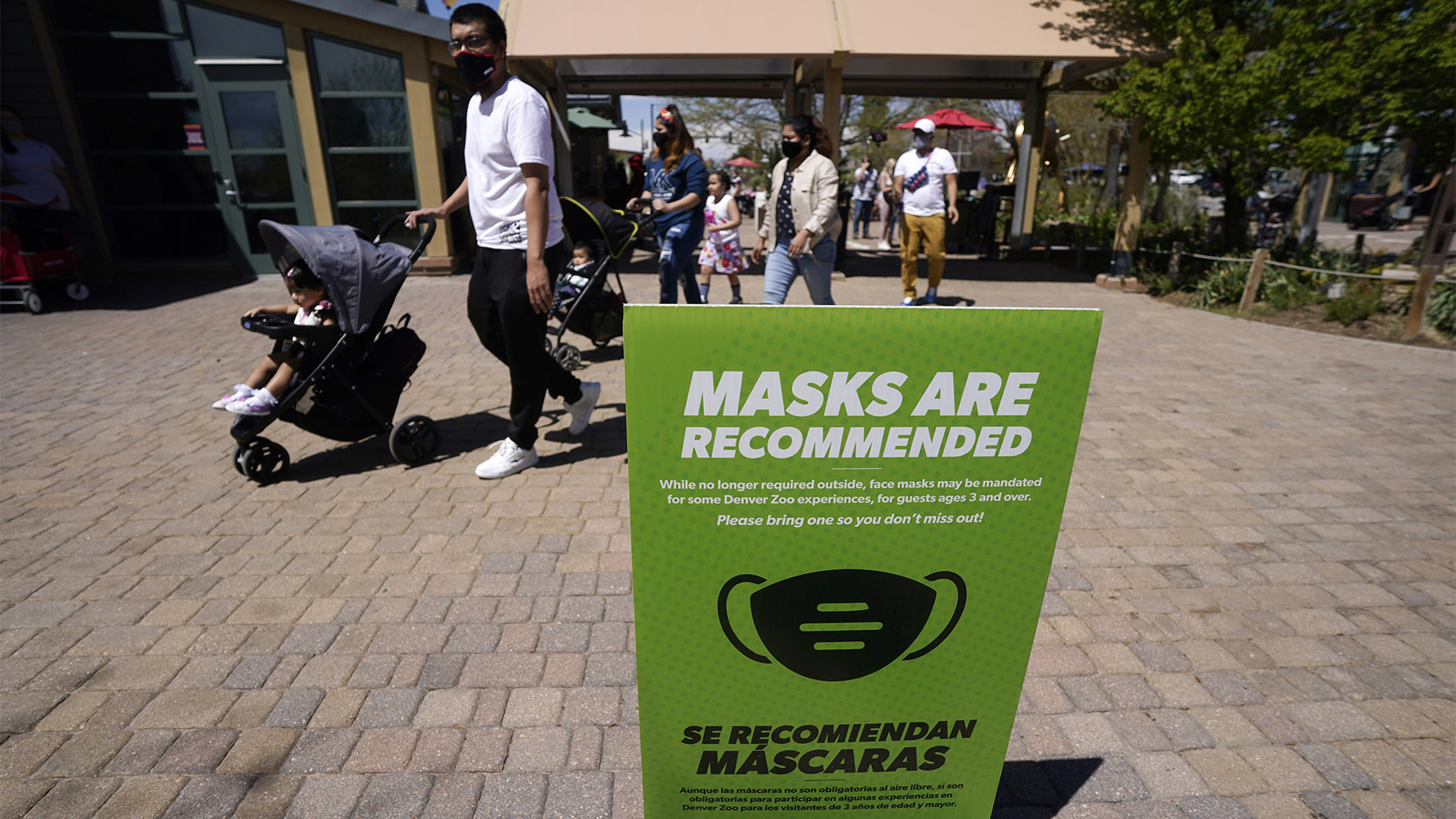 FILE – In this May 13, 2021, file photo, although no longer required outside, a sign advises visitors to wear masks at the Denver Zoo in Denver. (AP Photo / David Zalubowski, File)


Several states immediately and enthusiastically embraced new guidelines from the Centers for Disease Control and Prevention that say fully vaccinated Americans no longer need to wear masks indoors or out in most situations.

But other states and cities and some major businesses took a wait-and-see attitude Friday amid questions of whether the new stand is safe or workable, given that there is no easy way to know who has been vaccinated and who hasn’t. The guidelines essentially leave it up to people to do the right thing.

Labor groups and others warned that employees at stores, restaurants and other businesses could be left exposed to the coronavirus from customers and could be forced into the unwanted role of “vaccination police.”

Several major chains, including Home Depot and grocer Kroger Co., announced that they would keep mask mandates in place for now.

But Sean Weinberg took down mask signs Friday at Restaurant Alba in Malvern, Pennsylvania, which he runs with his wife. He also emailed his employees to let them know they can forgo masks at work if they are fully vaccinated.

“It’s just a headache we don’t want to have to fight any more,” he said of the mask requirement.

On an earnings call, Disney CEO Bob Chapek described the new guidelines as “very big news” and hinted that there could be a change to the mask requirement at Disney parks in the near future.

“Particularly, if anybody’s been in Florida in the middle of summer with a mask on. That could be quite daunting,” Chapek said. “So we think that’s going to make for an even more pleasant experience.”

States such as Michigan, Nevada, Oregon, Pennsylvania, Minnesota, Kentucky, Washington and Kansas announced plans to fall in line with the CDC guidance either immediately or in the coming weeks.

In a video statement, Oregon Gov. Kate Brown said the new approach makes clear that vaccines are the fastest way to get back to doing the things “we all love.” Kentucky Gov. Andy Beshear called the guidance a “gamechanger.”

“This is a heck of a benefit,” Washington Gov. Jay Inslee said. “People who have been annoyed by this mask … that shot is a ticket to freedom from masks.”

Other states, such as Massachusetts, Maine and Rhode Island, were waiting, though a spokesperson for Republican Massachusetts Gov. Charlie Baker said an update was coming “in the near future.”

California’s Department of Public Health said it was still reviewing the guidelines.

“I think this is early,” Marin County Public Health Officer Dr. Matt Willis said on San Francisco’s KGO-TV. “Frankly, the idea of people not covering their faces indoors when they’re gathered together, it’s concerning that there would be ongoing transmission.”

The president of the American Federation of Teachers, Randi Weingarten, said the 1.7-million-member union is still trying to sort out what the change means. Many schools already had been ditching mask orders in recent weeks.

“It seems too wasteful to just throw them away,” he said. “I think I’ll have my mother make them into a quilt.”

And Shelby Lofton, a reporter for WKYT-TV in Lexington, Kentucky, quipped in a tweet: “So, I guess I’ll start wearing lipstick again. Also need to work on my poker face.”

Elsewhere, the announcement didn’t mean much because many states and cities already had dropped mask requirements in recent weeks amid improving virus numbers. The tourist town of Branson, Missouri, did so early last month after voting out several mask supporters.

“I think it just further supports the decision we made to lift the mask mandate,” said newly elected Mayor Larry Milton. “It was dividing our community. We heard loud and clear from voters that they wanted the mask mandate repealed.”

The CDC and the Biden administration have faced pressure to ease restrictions on fully vaccinated people — those who are two weeks past their last required dose — in part to highlight the benefits of the shots and motivate other people to get inoculated.

Nearly 47% of the U.S. population has received at least one dose of COVID-19 vaccine, and almost 36% is fully vaccinated. Virus cases have dropped to their lowest level since September, at an average of about 35,000 a day, and have fallen by almost one-third in just the past two weeks. Deaths have plummeted to about 620 a day on average, a level not seen since July of last year.

In Kansas, Richard Ranzau, who has emerged in recent weeks as a leading opponent of masks in schools in the Wichita area and formerly served on the county commission, said the announcement was overdue.

“If you don’t have confidence in the vaccine then why are you getting vaccinated? At this point everyone, at least here in Kansas, everyone has had the opportunity,” he said.

In making the announcement, CDC Director Dr. Rochelle Walensky noted that the vaccine has proved powerfully effective in preventing serious COVID-19 illness. She cited evidence that infections in people who have gotten their shots tend to be milder, shorter and harder to spread to others.

Occasional cases of the fully vaccinated becoming infected have raised concerns, though.

The number of international homebuyers declined sharply throughout the United States in the past year amidst the global COVID-19 pandemic, according … END_OF_DOCUMENT_TOKEN_TO_BE_REPLACED

Tom Rodeno, 50, a 20-year veteran in representing industrial spaces for Colliers International, based out of the Rosemont office with the title of … END_OF_DOCUMENT_TOKEN_TO_BE_REPLACED

Chicago’s city officials move the deadline for submitting a proposal for the planned casino to October 29, looking for more bidders. Chicago … END_OF_DOCUMENT_TOKEN_TO_BE_REPLACED

A community in western Illinois has officially disbanded its police department over budget concerns. East Galesburg has been without its police … END_OF_DOCUMENT_TOKEN_TO_BE_REPLACED

The officer who died was the first Chicago cop shot and killed in the line of duty this year, Brown said. It's the first line-of-duty shooting … END_OF_DOCUMENT_TOKEN_TO_BE_REPLACED