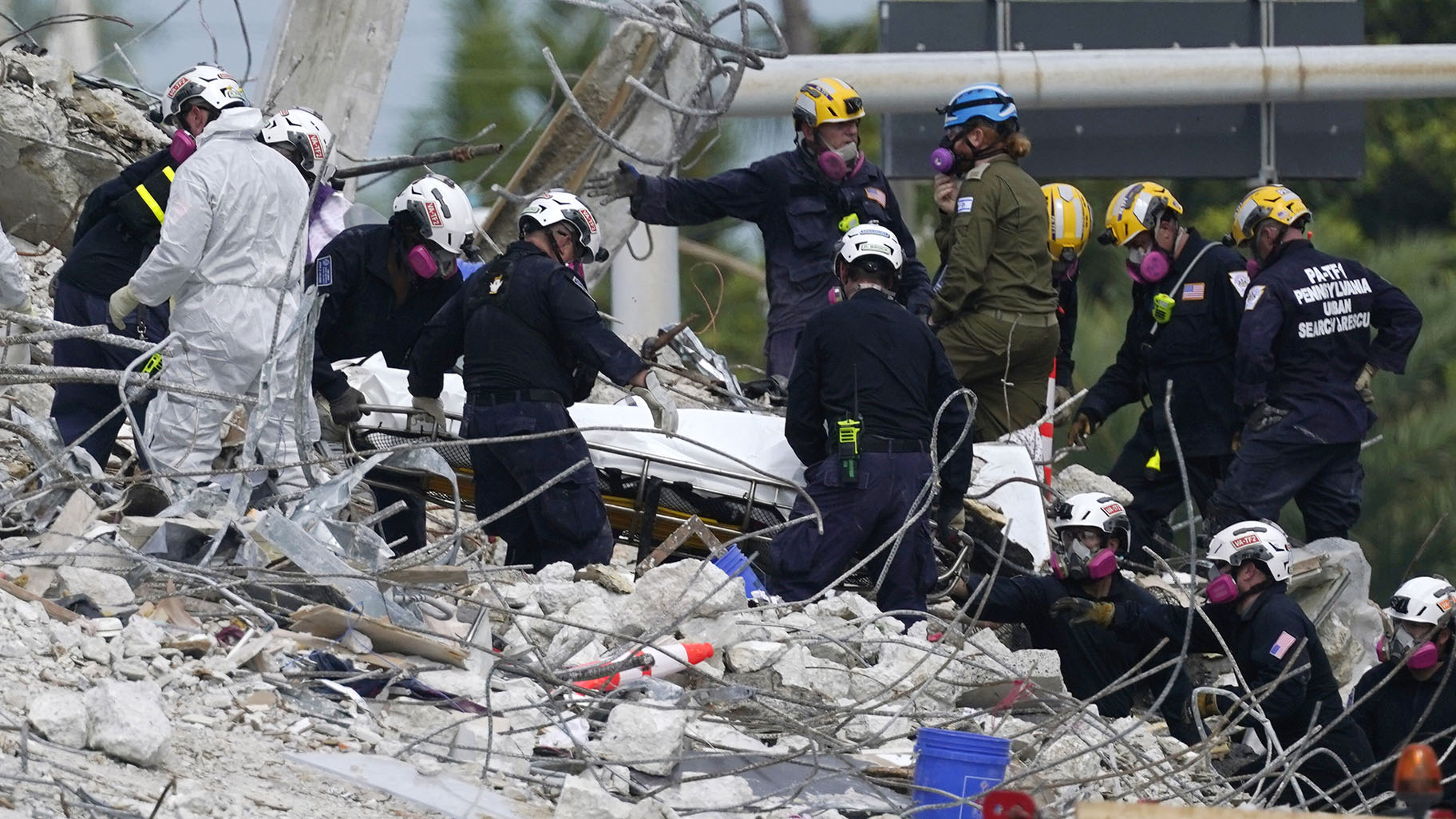 
SURFSIDE, Fla. (AP) — Officials overseeing the search at the site of the Florida condominium collapse sounded increasingly somber Tuesday about the prospects for finding anyone alive, saying they have detected no new signs of life in the rubble as the death toll climbed to 36.

Crews in yellow helmets and blue jumpsuits searched the debris for a 13th day while wind and rain from the outer bands of Tropical Storm Elsa complicated their efforts. Video released by the Miami-Dade County Fire Rescue Department showed workers lugging pickaxes and power saws through piles of concrete rubble barbed with snapped steel rebar. Other searchers could be seen digging with gloved hands through pulverized concrete and dumping shovels of debris into large buckets.

Search-and-rescue workers continued to look for open spaces where people might be found alive nearly two weeks after the disaster struck at the Champlain Towers South building in Surfside.

“I think everybody will be ready when it’s time to move to the next phase,” said Levine Cava, who stressed that crews would use the same care as they go through the rubble even after their focus shifts from searching for survivors to recovering the dead.

“Really, you will not see a difference,” she said. “We will carefully search for bodies and belongings, and to catalog and respectfully deal with any remains that we find.”

No one has been rescued alive since the first hours after the collapse, which struck early on June 24, when many of the building’s residents were asleep.

Officials announced Tuesday that teams had recovered eight additional bodies — the highest one-day total since the collapse. More than 100 people remain unaccounted for.

However, the storm’s heaviest winds and rain were expected to bypass Surfside and neighboring Miami as Elsa strengthened before making landfall somewhere between Tampa Bay and Florida’s Big Bend on a path across northern Florida.

“Active search and rescue continued throughout the night, and these teams continue through extremely adverse and challenging conditions,” Levine Cava said. “Through the rain and through the wind, they have continued searching.”

Crews have removed 124 tons (112 metric tonnes) of debris from the site, Cominsky said.

Workers have been freed to search a broader area since the unstable remaining portion of the condo building was demolished Sunday amid fears that the structure could fall. Officials said the demolition gave rescuers access to spaces that were previously closed off, including bedrooms where people were believed to be sleeping at the time of the disaster.

The number of international homebuyers declined sharply throughout the United States in the past year amidst the global COVID-19 pandemic, according … END_OF_DOCUMENT_TOKEN_TO_BE_REPLACED

Tom Rodeno, 50, a 20-year veteran in representing industrial spaces for Colliers International, based out of the Rosemont office with the title of … END_OF_DOCUMENT_TOKEN_TO_BE_REPLACED

Chicago’s city officials move the deadline for submitting a proposal for the planned casino to October 29, looking for more bidders. Chicago … END_OF_DOCUMENT_TOKEN_TO_BE_REPLACED

A community in western Illinois has officially disbanded its police department over budget concerns. East Galesburg has been without its police … END_OF_DOCUMENT_TOKEN_TO_BE_REPLACED

The officer who died was the first Chicago cop shot and killed in the line of duty this year, Brown said. It's the first line-of-duty shooting … END_OF_DOCUMENT_TOKEN_TO_BE_REPLACED