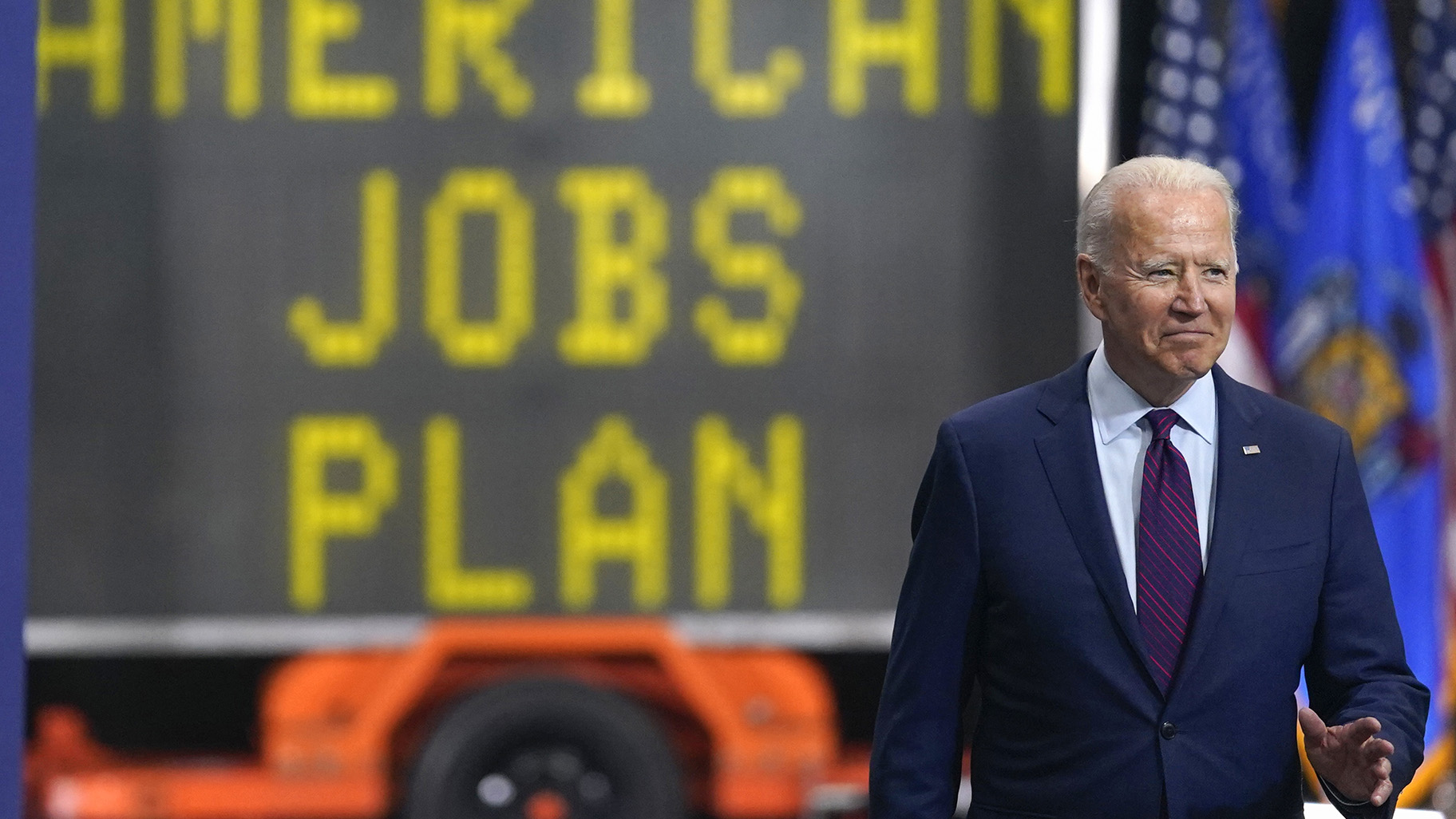 
LA CROSSE, Wis. (AP) — President Joe Biden declared there is an urgent need for a “generational investment” in the nation’s infrastructure, as he looked to sell voters Tuesday on the economic benefits of the $973 billion bipartisan package that still faces an uncertain future in Congress.

Biden traveled to La Crosse, Wisconsin, population 52,000, and toured its public transit center, highlighting projects — including hybrid buses and road repair equipment — that would receive additional funding from the infrastructure bill. He argued that the package, which is held together in large part by the promise of millions of new jobs, is a way for the United States to assert both the principles of democracy and the economic might that can come from dramatic investments in the country’s future.

“This deal isn’t just the sum of its parts. It’s a signal to ourselves, and to the world, that American democracy can come through and deliver for all our people,” said Biden. “America has always been propelled into the future by landmark investments.”

He said there is a critical need to improve crumbling infrastructure — from overwhelmed power grids to lead-filled water pipes to traffic-clogged roads — and stressed that a plan needs to be ambitious to not only improve Americans’ daily lives now but also to combat the growing challenges of climate change.

“We’re not just tinkering around the edges,” Biden said.

He also made his pitch in personal terms, reminiscing about driving a bus during law school and noting the 1972 traffic accident that killed his first wife and daughter, as he called for improvements to make the nation’s roads safer.

The visit to Wisconsin was the beginning of what the White House has declared would be a series of presidential trips to sell the bipartisan bill — and to reassure the nervous Republicans who helped craft it.

“I’m going to be out there making the case for the American people until this job is done, until we bring this bipartisan bill home,” said the president, though he allowed that “there will be more disagreements to be resolved, more compromises” to be made.

The process briefly fell into disarray late last week as Biden suggested the deal would be held up until he also received a separate package for infrastructure, jobs and education that would be determined solely by Democrats through the budget reconciliation process.

Biden said Saturday that this was not a veto threat, and by Sunday the package appeared back on track. But there were still anxieties on both sides of the aisle.

Some Republicans have questioned the wisdom of signing onto a bipartisan bill if it is linked to a party-line reconciliation bill that will contain a host of Democratic priorities. And GOP Senate Leader Mitch McConnell, who has often declared his steadfast opposition to the Biden agenda, has questioned the process.

Meanwhile, a balancing act awaited among Democrats as well: Some more liberal members of the party have urged Biden to push for a Democrats-only reconciliation bill at least as large as his previously stated $4 trillion goal, while some more moderate members have signaled they’d want a much smaller number. With the Senate deadlocked 50-50, with ties broken by Vice President Kamala Harris, the White House can’t afford to lose a single vote.

As Biden trumpeted the deal in public, the White House also furiously worked behind the scenes to keep it on the tracks.

Senior West Wing aides have had calls this week with more than 60 Democratic and Republican members and chiefs of staff and other aides, White House Press Secretary Jen Psaki told reporters Tuesday aboard Air Force One en route to Wisconsin. And she said the White House was going along with the timeline outlined by Senate Majority Leader Chuck Schumer, who has said he wants to have both packages on the floor for debate next month.

An internal White House memo highlights how the administration contends the largest investment in transportation, water systems and services in nearly a century would boost growth. The memo notes that the total package is four times the size of the infrastructure investment made a dozen years ago in response to the Great Recession and the biggest since Franklin D. Roosevelt’s New Deal in the 1930s.

It also emphasizes an analysis suggesting that 90% of the jobs generated by the spending could go to workers without college degrees, a key shift as a majority of net job gains before the pandemic went to college graduates.

“This is a blue-collar blueprint to rebuild America,” the memo says.

The visit to La Crosse was indeed a blue-collar political play, with faux traffic construction signs that said “American Jobs Plan” dotted across the venue. The president has long connected with working-class voters, while Wisconsin is one of the trio of Great Lakes states — along with Michigan and Pennsylvania — that Biden narrowly reclaimed for the Democrats after they were captured by Donald Trump in 2016.

Biden, making an impromptu stop for ice cream after his speech, received a suggestion to order the rocky road flavor as a nod to the infrastructure bill but he quipped “it’s been a rocky road, but we’re going to get it done” and instead ordered cookies and cream and strawberry.

Potential economic gains were a shared incentive for the group of Democratic and Republican senators who agreed to the deal last week. McConnell said he has not yet decided whether he will support the bipartisan package, but he wants Biden to pressure House Speaker Nancy Pelosi and Schumer to say they will allow the bipartisan arrangement to pass without mandating that the much larger and broader follow-up bill be in place.

“I appreciate the president saying that he’s willing to deal with infrastructure separately, But he doesn’t control the Congress,” McConnell said this week.

The two bills had always been expected to move in tandem, and that is likely to continue as Biden drops his veto threat but reaches across the aisle for the nearly $1 trillion bipartisan package as well as his own broader package. The Democratic leaders are pressing ahead on the broader bill, which includes Biden’s families and climate change proposals, as well as their own investments in Medicare, swelling to some $6 trillion.

One of the Democratic moderates, Sen. Joe Manchin of West Virginia, reiterated Tuesday that he would be amenable to a party-line budget bill but did not address its size.

He told MSNBC that “I have agreed that that can be done.”

The number of international homebuyers declined sharply throughout the United States in the past year amidst the global COVID-19 pandemic, according … END_OF_DOCUMENT_TOKEN_TO_BE_REPLACED

Tom Rodeno, 50, a 20-year veteran in representing industrial spaces for Colliers International, based out of the Rosemont office with the title of … END_OF_DOCUMENT_TOKEN_TO_BE_REPLACED

A community in western Illinois has officially disbanded its police department over budget concerns. East Galesburg has been without its police … END_OF_DOCUMENT_TOKEN_TO_BE_REPLACED

The officer who died was the first Chicago cop shot and killed in the line of duty this year, Brown said. It's the first line-of-duty shooting … END_OF_DOCUMENT_TOKEN_TO_BE_REPLACED