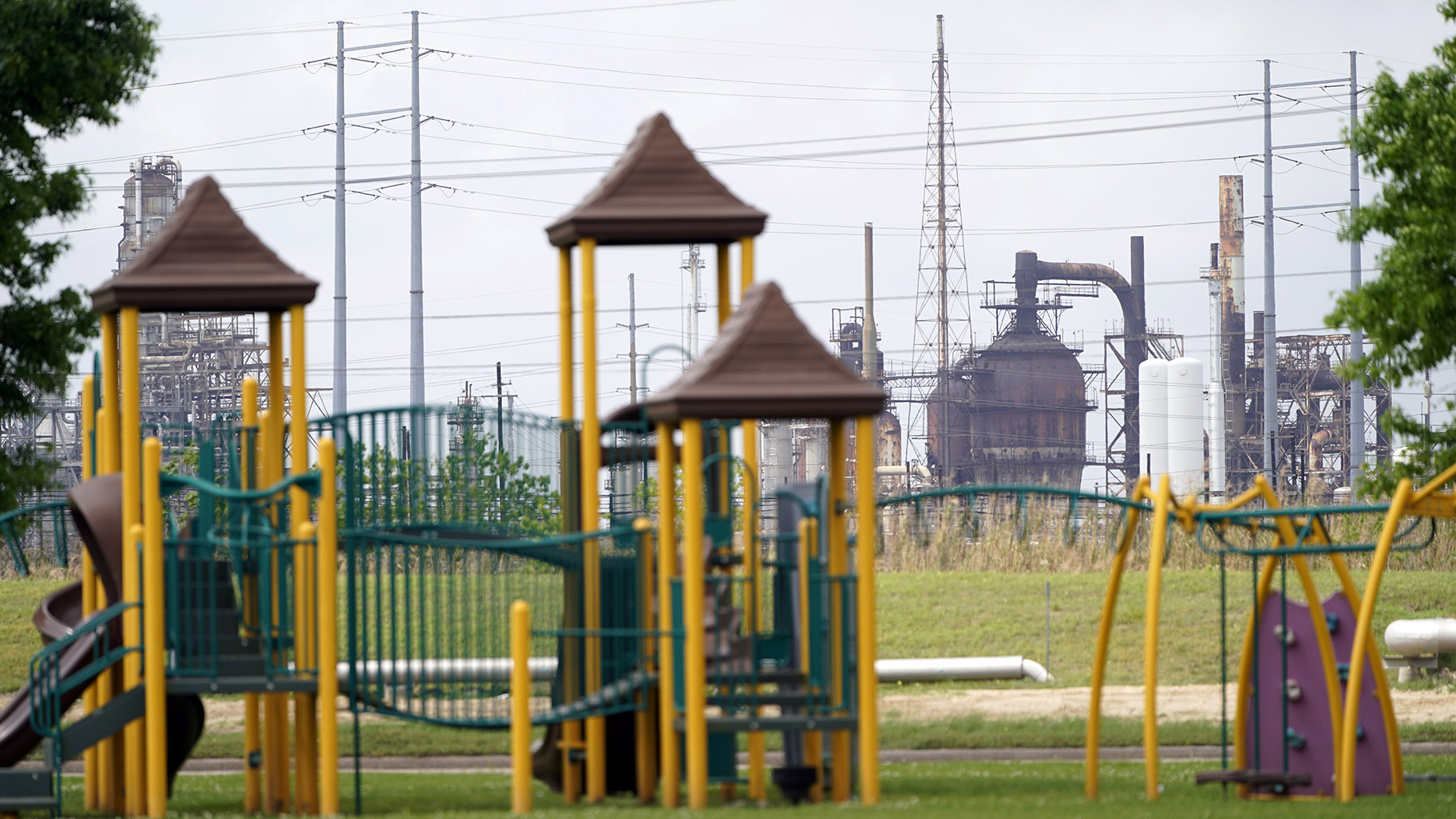 In this Monday, March 23, 2020 file photo, a playground outside the Prince Hall Village Apartments sits empty near one of the petrochemical facilities in Port Arthur, Texas. (AP Photo / David J. Phillip)


Across America, people of color are exposed to more air pollution than whites from industry, vehicles, construction and many other sources, a new study has found.

Using government air pollution and census data, researchers found that disproportionate numbers of non-white people were exposed to potentially hazardous fine particle pollution from nearly all major U.S. emission sources, regardless of where they live or how much money they make.

The study, published Wednesday in the journal Science Advances,  also found that Blacks were the only group disproportionately exposed to each of the pollution sources examined.

“It doesn’t matter how poor, it doesn’t matter how wealthy, the racial disparities exist for all African-Americans and other people of color,” said Paul Mohai, a professor of environmental justice at the University of Michigan who was not involved with the study. He’s researched racial disparities in the distribution of hazardous waste dumps, industrial facilities and air pollution at schools — and why and how these disparities exist.

“When you look at the impact of air pollution in the U.S. from all the sources that contribute to fine particulate matter in the atmosphere, there is an overall systemic bias against people of color,” said study co-author Jason Hill, a biosystems engineering professor at the University of Minnesota.

Fine particulate matter comes from a variety of sources, including coal-fired power plants, diesel trucks and farms. Past research shows associations between exposure to particulate matter and health problems such as premature death in people with heart or lung disease, heart attacks, irregular heartbeat and asthma.

The researchers sorted the Environmental Protection Agency’s emissions inventory of over 5,000 types of fine particulate matter into 14 sources such as industry, passenger cars, diesel trucks, construction and agriculture. Then they modeled exposure to those pollution sources by calculating average ambient air quality levels for racial groups based on their residential locations in 2014.

“Given that we have this national inequity in pollution exposure, what (sources are) actually driving that?” Hill said. “What this paper shows is that it’s pretty much everything.”

When looking at exposure disparities in urban areas, researchers found a notable exception: Asians are less exposed to particulate matter than average in urban areas in California such as San Francisco, Los Angeles and San Jose. The study didn’t examine the cause of this, said lead author Christopher Tessum, an environmental engineering professor at University of Illinois Urbana-Champaign.

This study appeared days after President Joe Biden convened a summit of world leaders to discuss emissions reductions, as well as shaping policy to protect vulnerable communities like ones disproportionately exposed to air pollution.

Hill said policymakers can use the study’s findings to help make the case for tougher federal and state standards for regulating air pollution. “This is something that needs to be done at a national level,” he said in an interview.

Said University of Virginia Economics Professor Jonathan Colmer: “By decomposing disparities in fine particulate matter into their component sources, their research shines a light on where researchers, policymakers, and communities might focus efforts going forward.” Colmer, lead author on a 2020 paper  about disparities in air pollution, was not part of the new study.

He said the disparities in air pollution exposure are part of “a long history of slavery and racial discrimination in the U.S.”

“We started to see a pattern with the history of racial discrimination and segregation of industry being located where people of color are concentrated,” Mohai said. “Racism isn’t just about racial animus. It’s about not caring about the welfare of people of other races and I think that’s been a factor.”

The number of international homebuyers declined sharply throughout the United States in the past year amidst the global COVID-19 pandemic, according … END_OF_DOCUMENT_TOKEN_TO_BE_REPLACED

Tom Rodeno, 50, a 20-year veteran in representing industrial spaces for Colliers International, based out of the Rosemont office with the title of … END_OF_DOCUMENT_TOKEN_TO_BE_REPLACED

Chicago’s city officials move the deadline for submitting a proposal for the planned casino to October 29, looking for more bidders. Chicago … END_OF_DOCUMENT_TOKEN_TO_BE_REPLACED

A community in western Illinois has officially disbanded its police department over budget concerns. East Galesburg has been without its police … END_OF_DOCUMENT_TOKEN_TO_BE_REPLACED

The officer who died was the first Chicago cop shot and killed in the line of duty this year, Brown said. It's the first line-of-duty shooting … END_OF_DOCUMENT_TOKEN_TO_BE_REPLACED