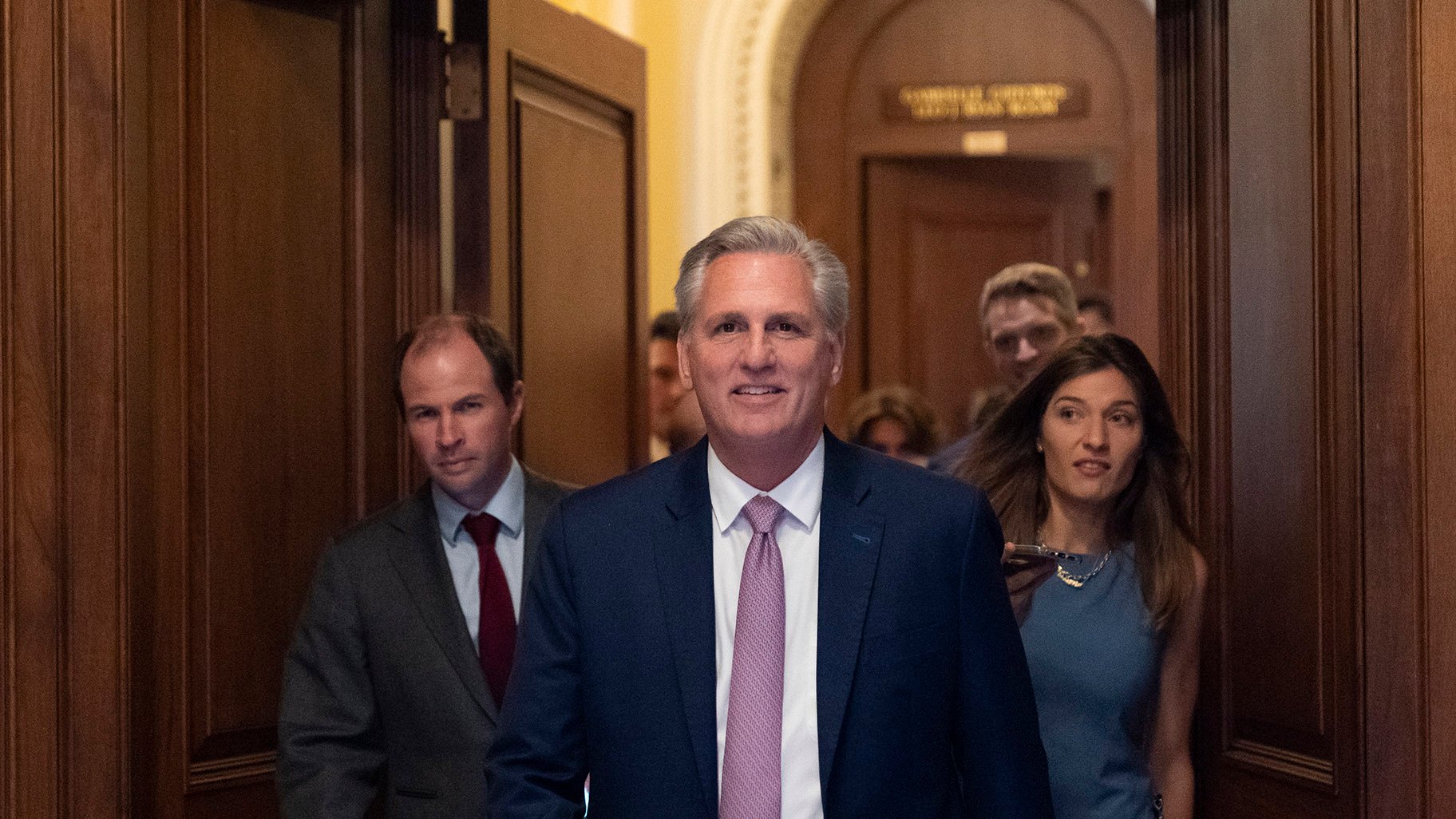 House Minority Leader Kevin McCarthy of Calif., center, leaves the floor after the House voted to create a select committee to investigate the Jan. 6 insurrection, at the Capitol in Washington, Wednesday, June 30, 2021. (AP Photo / Alex Brandon)


WASHINGTON (AP) — House Republican Leader Kevin McCarthy has picked five Republicans to sit on the new select committee to investigate the Jan. 6 insurrection at the Capitol, signaling that Republicans will participate in the investigation that they have staunchly opposed.

McCarthy has selected Indiana Rep. Jim Banks, who recently visited former President Donald Trump on trips to the U.S.-Mexico border and Trump’s New Jersey golf club, to be the top Republican on the panel, according to a Republican familiar with the decision and an aide to House Speaker Nancy Pelosi. Pelosi must approve the names before they are final, per committee rules.

McCarthy has also tapped Ohio Rep. Jim Jordan, Illinois Rep. Rodney Davis, North Dakota Rep. Kelly Armstrong and Texas Rep. Troy Nehls to serve on the panel, according to the two people, who shared the names on condition of anonymity ahead of an official announcement.

The five Republicans selected by McCarthy — all men — have strongly supported Trump, whose supporters laid siege to the Capitol building on Jan. 6 and interrupted the certification of President Joe Biden’s victory. Banks, Jordan and Nehls all voted to overturn Biden’s win that day, even after the rioting. Davis and Armstrong voted to certify Biden’s win.

McCarthy’s picks come after all but two Republicans opposed the creation of the 13-person select committee in a House vote last month, with most in the GOP arguing that the majority-Democratic panel would conduct a partisan probe. House Democrats originally attempted to create an evenly split, independent commission to investigate the insurrection, but that effort fell short when it was blocked by Senate Republicans.

House Republicans have largely remained loyal to Trump despite the violent insurrection of his supporters that sent many of them running for their lives. Banks made clear in a statement Monday evening that he would take a combative approach to his leadership on the panel, sharply criticizing the Democrats who had set it up.

Jordan, one of Trump’s staunchest defenders through his two impeachments and the top Republican on the House Judiciary Committee, said after the House vote to form the committee that he believed the panel is “impeachment three” against the former president. Trump was impeached by the House and acquitted by the Senate both times.

It is unclear if Pelosi will approve the members. The aide to Pelosi said her office had received the names from McCarthy’s office.

The Democratic chair of the select committee, Mississippi Rep. Bennie Thompson, said Monday evening that he hadn’t seen the names but referred the matter to Pelosi. “It’s up to her,” he said.

Pelosi named eight members of the committee earlier this month — seven Democrats and Republican Rep. Liz Cheney of Wyoming, who has strongly criticized Trump and has been the most outspoken member of her caucus against the insurrection. Cheney was demoted from GOP leadership in May over her comments.

As McCarthy has stayed quiet on Republican participation on the panel, Thompson has said that the committee will have a quorum to conduct business whether GOP members are present or not.

The new members will be put to the test at the panel’s first hearing next week, with at least four rank-and-file police officers who battled rioters that day testifying about their experiences. Dozens of police officers were injured as the crowd pushed past them and broke into the Capitol building.

Seven people died during and after the rioting, including a woman who was shot by police as she tried to break into the House chamber and three other Trump supporters who suffered medical emergencies. Two police officers died by suicide in the days that followed, and a third officer, Capitol Police Officer Brian Sicknick, collapsed and later died after engaging with the protesters. A medical examiner determined he died of natural causes.

The number of international homebuyers declined sharply throughout the United States in the past year amidst the global COVID-19 pandemic, according … END_OF_DOCUMENT_TOKEN_TO_BE_REPLACED

Tom Rodeno, 50, a 20-year veteran in representing industrial spaces for Colliers International, based out of the Rosemont office with the title of … END_OF_DOCUMENT_TOKEN_TO_BE_REPLACED

Chicago’s city officials move the deadline for submitting a proposal for the planned casino to October 29, looking for more bidders. Chicago … END_OF_DOCUMENT_TOKEN_TO_BE_REPLACED

A community in western Illinois has officially disbanded its police department over budget concerns. East Galesburg has been without its police … END_OF_DOCUMENT_TOKEN_TO_BE_REPLACED

The officer who died was the first Chicago cop shot and killed in the line of duty this year, Brown said. It's the first line-of-duty shooting … END_OF_DOCUMENT_TOKEN_TO_BE_REPLACED