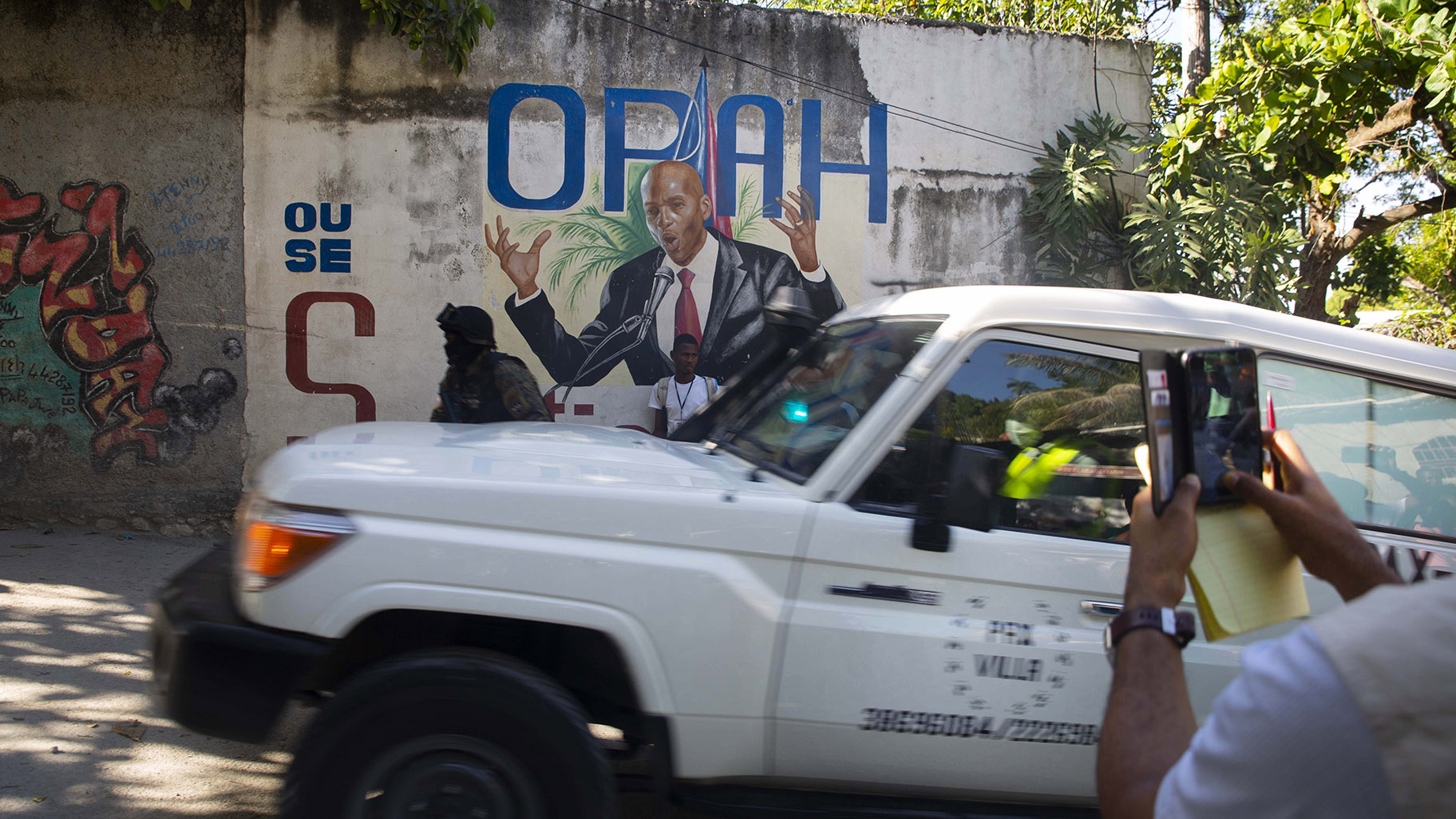 An ambulance carrying the body of Haiti’s President Jovenel Moise drives past a mural featuring him near the leader’s residence where he was killed by gunmen in the early morning in Port-au-Prince, Haiti, Wednesday, July 7, 2021. (AP Photo / Joseph Odelyn)


PORT-AU-PRINCE, Haiti (AP) — Two men believed to be Haitian Americans — one of them purportedly a former bodyguard at the Canadian Embassy in Port au Prince — have been arrested in connection with the assassination of Haiti’s president, a senior Haitian official said Thursday.

Mathias Pierre, Haiti’s minister of elections, told The Associated Press that James Solages was among six people arrested in the brazen killing of President Jovenel Moise by gunmen at his home in the pre-dawn hours Wednesday.

Seven other suspected assailants were killed in a gunfight with police, according to Haiti’s director of National Police Léon Charles.

Pierre would not provide additional details about Solages’ background, nor provide the name of the second Haitian American. The U.S. State Department said it was aware of reports that Haitian Americans were in custody but could not confirm or comment.

Solages described himself as a “certified diplomatic agent,” an advocate for children and budding politician on a website for a charity he established in 2019 in south Florida to assist residents.

Witnesses said two suspects were discovered Thursday hiding in bushes in Port-au-Prince by a crowd, some of whom grabbed the men by their shirts and pants, pushing them and occasionally slapping them.

Police arrested the men, who were sweating heavily and wearing clothes that seemed to be smeared with mud, an Associated Press journalist said. Officers put them in the back of a pickup truck and drove away as the crowd ran after them to the nearby police station.

Once there, some in the crowd chanted: “They killed the president! Give them to us. We’re going to burn them!”

One man was overheard saying that it was unacceptable for foreigners to come to Haiti to kill the country’s leader, referring to reports from Haitian officials that the perpetrators spoke Spanish or English.

The crowd later set fire to several abandoned cars riddled with bullet holes that they believed belonged to the suspects, who were white men. The cars didn’t have license plates, and inside one of them was an empty box of bullets and some water.

At a news conference Thursday, Charles, the police chief, urged people to stay calm and let police do their work as he warned that authorities needed evidence they were destroying, including the burned cars.

Officials did not address a motive for the slaying, saying only that the attack, condemned by Haiti’s main opposition parties and the international community, was carried out by “a highly trained and heavily armed group.”

Meanwhile, a Haitian judge involved in the investigation said that Moïse was shot a dozen times and his office and bedroom were ransacked, according to the Haitian newspaper Le Nouvelliste. It quoted Judge Carl Henry Destin as saying investigators found 5.56 and 7.62 mm cartridges between the gatehouse and inside the house.

Moïse’s daughter, Jomarlie Jovenel, hid in her brother’s bedroom during the attack, he said, and a maid and another worker were tied up by the attackers.

Interim Prime Minister Claude Joseph, who assumed leadership of Haiti with the backing of police and the military, asked people to reopen businesses and go back to work as he ordered the reopening of the international airport.

On Wednesday, Joseph decreed a two-week state of siege following Moïse’s killing, which stunned a nation grappling with some of the Western Hemisphere’s highest poverty, violence and political instability.

Inflation and gang violence have spiraled upward as food and fuel grew scarcer in a country where 60% of Haitians earn less than $2 a day. The increasingly dire situation comes as Haiti is still trying to recover from the devastating 2010 earthquake and Hurricane Matthew in 2016 following a history of dictatorship and political upheaval.

“There is this void now, and they are scared about what will happen to their loved ones,” said Marlene Bastien, executive director of Family Action Network Movement, a group that helps people in Miami’s Little Haiti community.

She called on the Biden administration to take a much more active role in supporting attempts at national dialogue in Haiti with the aim of holding free, fair and credible elections.

Meanwhile, the Security Council met Thursday to talk about the situation in Haiti, and U.N. special envoy Helen La Lime, speaking to reporters at U.N. headquarters from Port-Au-Prince, said Haiti made a request for additional security assistance.

Haiti had grown increasingly unstable under Moïse, who had been ruling by decree for more than a year and faced violent protests as critics accused him of trying to amass more power while the opposition demanded he step down.

Moïse had faced large protests in recent months that turned violent as opposition leaders and their supporters rejected his plans to hold a constitutional referendum with proposals that would strengthen the presidency.

According to Haiti’s constitution, Moïse should be replaced by the president of Haiti’s Supreme Court, but the chief justice died in recent days from COVID-19, leaving open the question of who might rightfully succeed to the office.

Joseph, meanwhile, was supposed to be replaced by Ariel Henry, a neurosurgeon who had been named prime minister by Moïse a day before the assassination.

On Thursday, public transportation and street vendors remained scarce, an unusual sight for the normally bustling streets of Port-au-Prince.

Marco Destin, 39, was walking to see his family since no buses, known as tap-taps, were available. He was carrying a loaf of bread for them because they had not left their house since the president’s killing out of fear for their lives.

“Every one at home is sleeping with one eye open and one eye closed,” he said. “If the head of state is not protected, I don’t have any protection whatsoever.”

Gunfire rang out intermittently across the city hours after the killing, a grim reminder of the growing power of gangs that displaced more than 14,700 people last month alone as they torched and ransacked homes in a fight over territory.

Robert Fatton, a Haitian politics expert at the University of Virginia, said gangs were a force to contend with and it isn’t certain Haiti’s security forces can enforce a state of siege.

“It’s a really explosive situation,” he said, adding that foreign intervention with a U.N.-type military presence is a possibility.

“Whether Claude Joseph manages to stay in power is a huge question. It will be very difficult to do so if he doesn’t create a government of national unity.”

The number of international homebuyers declined sharply throughout the United States in the past year amidst the global COVID-19 pandemic, according … END_OF_DOCUMENT_TOKEN_TO_BE_REPLACED

Tom Rodeno, 50, a 20-year veteran in representing industrial spaces for Colliers International, based out of the Rosemont office with the title of … END_OF_DOCUMENT_TOKEN_TO_BE_REPLACED

Chicago’s city officials move the deadline for submitting a proposal for the planned casino to October 29, looking for more bidders. Chicago … END_OF_DOCUMENT_TOKEN_TO_BE_REPLACED

A community in western Illinois has officially disbanded its police department over budget concerns. East Galesburg has been without its police … END_OF_DOCUMENT_TOKEN_TO_BE_REPLACED

The officer who died was the first Chicago cop shot and killed in the line of duty this year, Brown said. It's the first line-of-duty shooting … END_OF_DOCUMENT_TOKEN_TO_BE_REPLACED