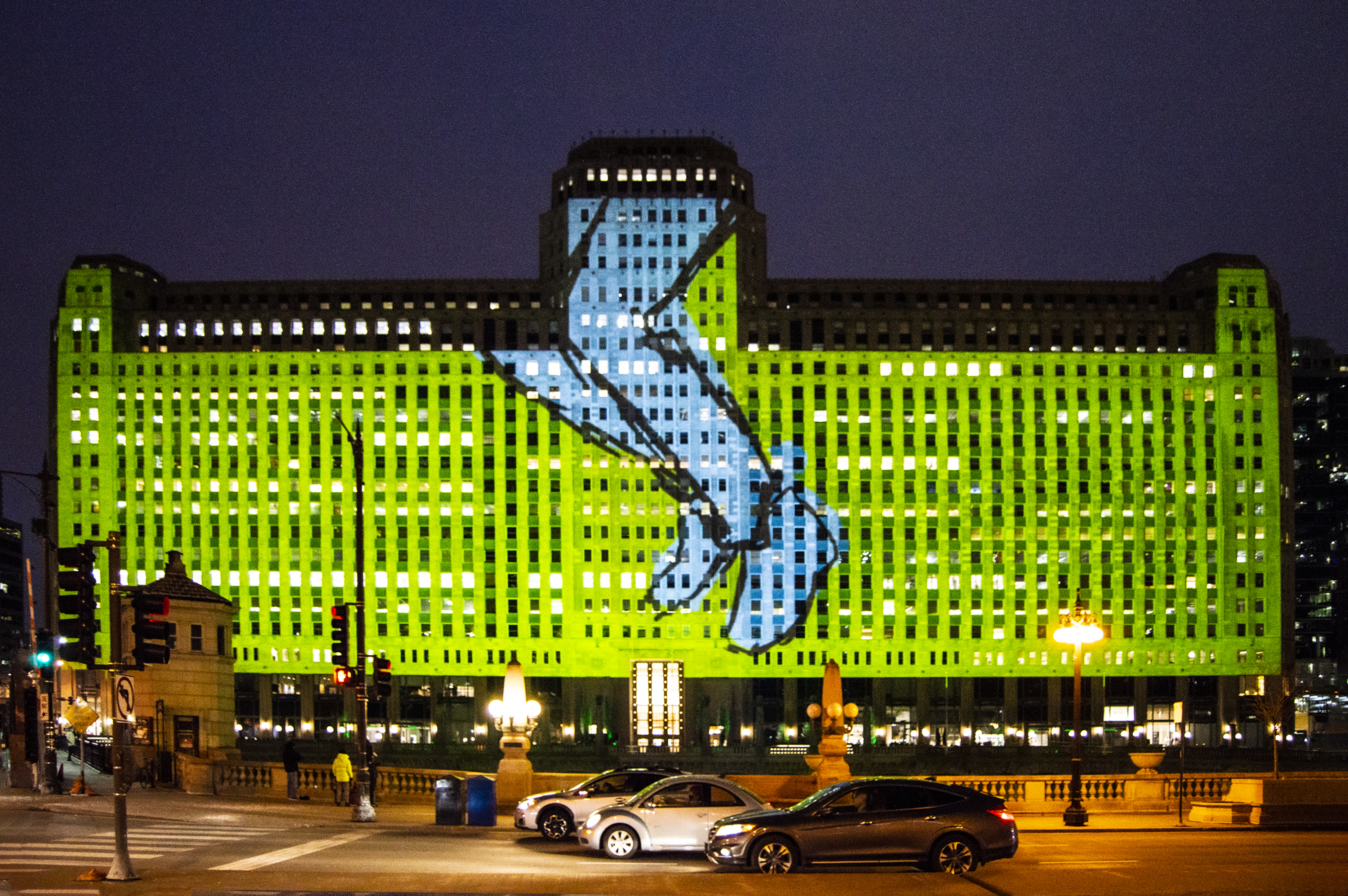 The larger-than-life projections of Art on theMart returned to the 25-story-tall face of the Merchandise Mart back in April, but the popular nighttime attraction has some new visuals in store for the summer. On Tuesday, July 6, Art on theMart’s summer program will make its debut, including a trio of new projections that feature local musicians, with a focus on the Chicago-born footwork music and dance genre as well as he work of contemporary composers.

Commemorating the Year of Chicago Music—which has been extended throughout the remainder of 2021—the trio of new projections feature Chicago-based musicians, pairing animations and video segments with a soundtrack that you can stream on your phone (streaming instructions are projected on the side of the Merchandise Mart before the program begins).

The highlight of the new projections is Footnotes, an animated celebration of footwork music and dance, which originated on Chicago’s West Side during the ’80s. Footwork music is characterized by its percussive production and quick tempos, providing a soundtrack for dances based around fast movements of the feet, accompanied by spins and turns of the body. While footwork music and dancing has spread across the globe, filmmakers Wills Glasspiegel and Brandon K. Calhoun use Footnotes to showcase Black youth on the city’s West and South Sides that have preserved and promoted the art form in their communities (the New York Times profiled some of these dancers in a recent story about the projections). The short film is set to the music of DJ Spinn, the Chicago Bucket Boys, Angel Bat Dawid, Elisha Chandler and Amal Hubert (of the Hypnotic Brass Band), many of whom appear in the projections.

The other two projections joining the nightly Art on theMart lineup are “the light of the dark”—featuring a piece composed by Bang on a Can co-founder Michael Gordon performed by local contemporary music ensemble Eighth Blackbird—and “Woven,” a collaboration between visual artist Selina Trepp and musician Dan Bitney (who work as a duo under the name Spectralina) that is inspired by various genres of music with origins in Chicago and depicts woven patterns that evoke the city’s neighborhoods.

These new projections will join animations devoted to the “Frida Kahlo: Timeless” exhibition at the Cleve Carney Museum of Art and “The Obama Portraits,” which is currently on display at the Art Institute of Chicago. Art on theMart takes over the side of Merchandise Mart every night, with shows at 9 and 9:30pm. The current lineup of projections will be on view until September 16.

The number of international homebuyers declined sharply throughout the United States in the past year amidst the global COVID-19 pandemic, according … END_OF_DOCUMENT_TOKEN_TO_BE_REPLACED

Tom Rodeno, 50, a 20-year veteran in representing industrial spaces for Colliers International, based out of the Rosemont office with the title of … END_OF_DOCUMENT_TOKEN_TO_BE_REPLACED

A community in western Illinois has officially disbanded its police department over budget concerns. East Galesburg has been without its police … END_OF_DOCUMENT_TOKEN_TO_BE_REPLACED

The officer who died was the first Chicago cop shot and killed in the line of duty this year, Brown said. It's the first line-of-duty shooting … END_OF_DOCUMENT_TOKEN_TO_BE_REPLACED