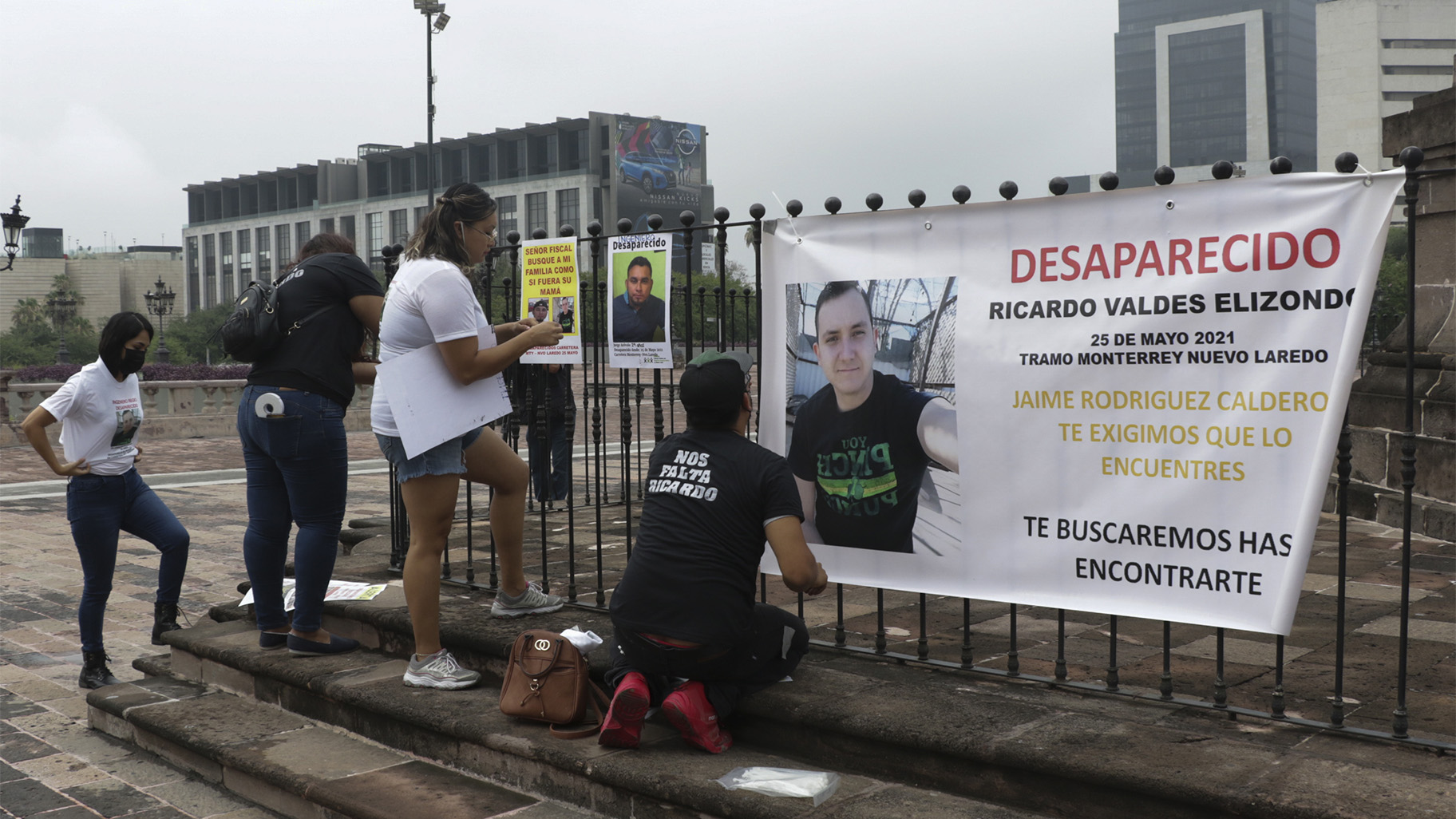 Family of Ricardo Valdes, who disappeared on the road on May 25, put up posters with their photography during a protest in Monterrey, Nuevo Leon state, Mexico, Thursday, June 24, 2021. (AP Photo / Roberto Martinez)


MEXICO CITY (AP) — As many as 50 people are missing after setting out on three-hour car trips this year between Mexico’s industrial hub of Monterrey and the border city of Nuevo Laredo on a well-traveled stretch of road local media have dubbed “the highway of death.”

Relatives say family members simply vanished. The disappearances, and last week’s shooting of 15 apparently innocent bystanders in Reynosa, suggest Mexico is returning to the dark days of the 2006-2012 drug war when cartel gunmen often targeted the general public as well as one another.

“It’s no longer between the cartels; they are attacking the public,” said activist Angelica Orozco.

On Saturday, the FBI office in San Antonio, Texas, issued a bulletin seeking information on the disappearance of a Laredo, Texas, woman, Gladys Perez Sánchez, and her 16-year-old son and 9-year-old daughter, who were last seen setting out on the highway June 13. They had visited relatives in Sabinas Hidalgo, a town on the highway, and were returning to Texas when they vanished.

Most of the victims are believed to have disappeared approaching or leaving the cartel-dominated city of Nuevo Laredo, across the border from Laredo, Texas. About a half-dozen men have reappeared alive, badly beaten, and all they will say is that armed men forced them to stop on the highway and took their vehicles.

What happened to the rest remains a mystery. Most were residents of Nuevo Leon state, where Monterrey is located. Desperate for answers, relatives of the missing took to the streets in Monterrey on Thursday to protest, demanding answers.

Orozco, a member of the civic group United Forces for Our Disappeared, said the abductions seem to mark a return to the worst days of Mexico’s drug war, like in 2011 when cartel gunmen in the neighboring state of Tamaulipas dragged innocent passengers off buses and forced them to fight each other to the death with sledgehammers.

Then, as now, politicians and prosecutors have given the families of the disappeared few answers.

“Now, more than 10 years after the disappearances in 2010 and 2011, they cannot continue to use the same pretexts,” said Orozco. But “they’re using the same lines. … In the last decade they were supposed to have created institutions and procedures, but it’s the same old story of authorities doing nothing.”

United Forces for Our Disappeared sent out a press statement on May 19 warning people about the dangers on the Monterrey-Nuevo Laredo highway, even though by mid-May the group had received only about 10 reports of people disappearing there. More reports poured in in June, and now amount to about 50.

The government of Nuevo Leon state acknowledged 10 days later that it had received reports of 14 people who had disappeared on the highway so far in 2021, along with five more in neighboring Tamaulipas, where Nuevo Laredo is located.

But Nuevo Leon didn’t warn people against traveling on the highway until almost a month later on June 23.

That was too late for Gómez, and for Javier Toto Cagal, a 36-year-old truck driver and father of five who disappeared along with three employees of the same trucking company on the 135-mile (220 km) stretch of highway on June 3. They were driving to Nuevo Laredo in a car.

“Up to now, we don’t know anything about (what happened to) them,” said Erma Fiscal Jara, Toto Cagal’s wife. “It wasn’t until June 5 that the company called me to say ‘your husband has disappeared.’ As far as the authorities, I ask and they say ‘we don’t know anything.’”

It wasn’t until Friday that both state governments announced a joint program to increase policing and security on the highway, a step that, if it had been carried out a month earlier, might have saved dozens of lives.

“Only now is the National Guard going out to patrol the highway. Why did they wait so long?” asked Karla Moreno, whose husband, truck driver Artemio Moreno, disappeared on the road April 13.

She, too, is horrified that northern Mexico is reliving the experiences of a decade ago. “How can this be happening? We were supposed to have more (law enforcement) resources by now,” she said.

Nuevo Laredo has long been dominated by the Northeast Cartel, a remnant of the old Zetas cartel, whose members were infamous for their violence.

Mexico security analyst Alejandro Hope said the highway disappearances and the June 19 events in Reynosa — when gunmen from rival cartels drove through the streets, randomly killing 15 passersby — were reminiscent of the attacks on civilians during the 2006-2012 drug war.

In 2008, a drug cartel in the western city of Morelia tossed hand grenades into a crowd during an Independence Day celebration. In 2011, cartel gunmen in Tamaulipas abducted dozens of men from passenger buses and made them fight each other to the death, either as a recruitment tool or for entertainment.

“It is something that happens episodically; it never completely stopped,” Hope said of the attacks on civilians. The only thing that has changed, Hope said, was the rhetoric.

Officials in the early 2000s were often quick to repeat an old belief that drug cartels only killed each other, not innocent civilians. This time around, both in the Reynosa killings and highway abductions, officials quickly acknowledged the victims appeared to be innocent civilians.

“That argument, that ‘they only kill each other’ isn’t heard so much anymore,” Hope said.

The number of international homebuyers declined sharply throughout the United States in the past year amidst the global COVID-19 pandemic, according … END_OF_DOCUMENT_TOKEN_TO_BE_REPLACED

Tom Rodeno, 50, a 20-year veteran in representing industrial spaces for Colliers International, based out of the Rosemont office with the title of … END_OF_DOCUMENT_TOKEN_TO_BE_REPLACED

A community in western Illinois has officially disbanded its police department over budget concerns. East Galesburg has been without its police … END_OF_DOCUMENT_TOKEN_TO_BE_REPLACED

The officer who died was the first Chicago cop shot and killed in the line of duty this year, Brown said. It's the first line-of-duty shooting … END_OF_DOCUMENT_TOKEN_TO_BE_REPLACED