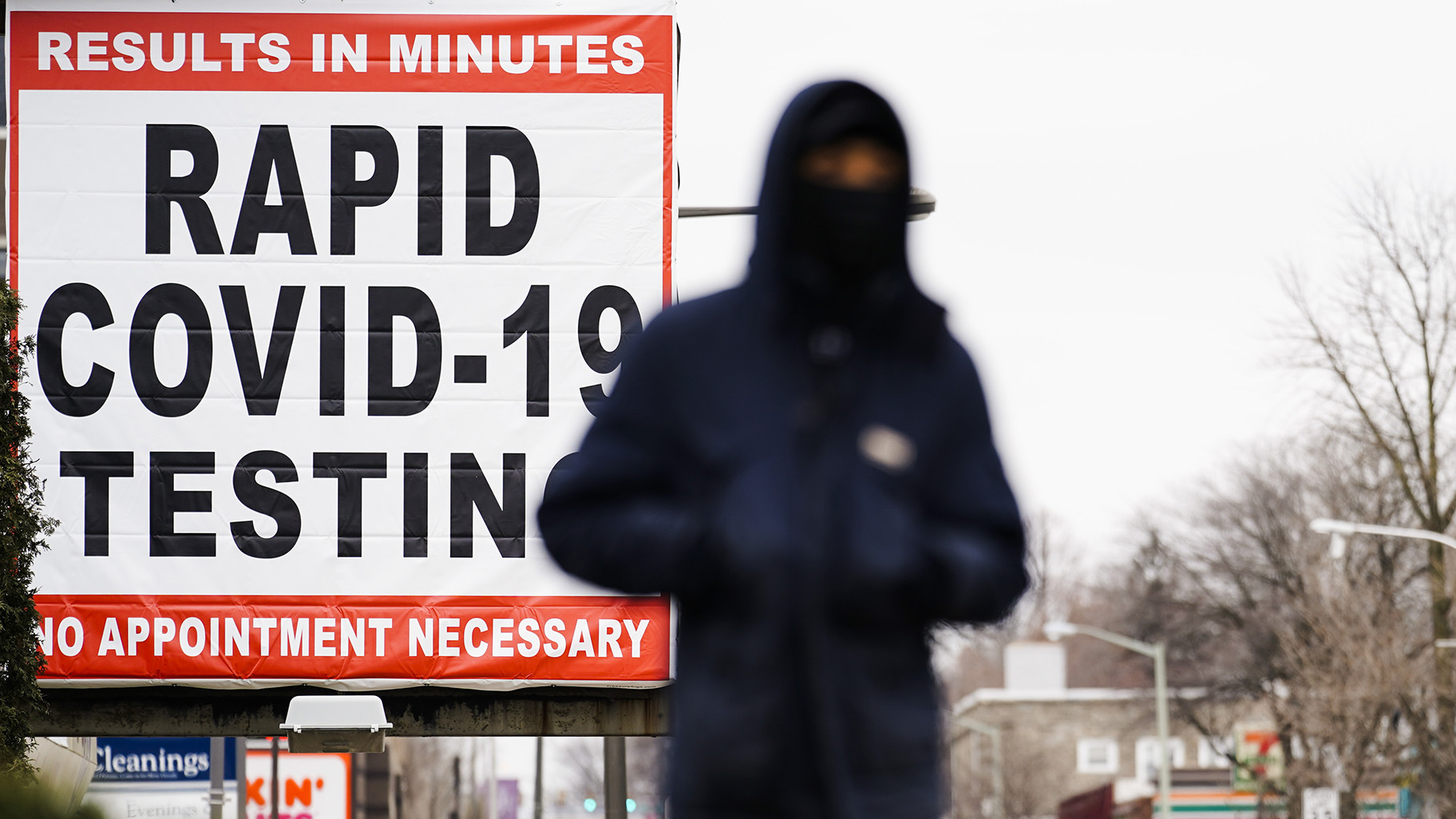 In this Jan. 25, 2021, file photo, a person wearing face mask as a precaution against the coronavirus walks near a sign advertising a rapid COVID-19 testing site in Philadelphia. (AP Photo / Matt Rourke, File)


WASHINGTON (AP) — Federal health officials’ new, more relaxed recommendations on masks have all but eclipsed another major change in guidance from the government: Fully vaccinated Americans can largely skip getting tested for the coronavirus.

The Centers for Disease Control and Prevention said last week that most people who have received the full course of shots and have no COVID-19 symptoms don’t need to be screened for the virus, even if exposed to someone infected.

The change represents a new phase in the epidemic after nearly a year in which testing was the primary weapon against the virus. Vaccines are now central to the response and have driven down hospitalizations and deaths dramatically.

Experts say the CDC guidance reflects a new reality in which nearly half of Americans have received at least one shot and close to 40% are fully vaccinated.

“At this point we really should be asking ourselves whether the benefits of testing outweigh the costs — which are lots of disruptions, lots of confusion and very little clinical or public health benefit,” said Dr. A. David Paltiel of Yale’s School of Public Health, who championed widespread testing at colleges last year.

While vaccinated people can still catch the virus, they face little risk of serious illness from it. And positive test results can lead to what many experts now say are unnecessary worry and interruptions at work, home and school, such as quarantines and shutdowns.

Other health specialists say the CDC’s abrupt changes on the need for masks and testing have sent the message that COVID-19 is no longer a major threat, even as the U.S. reports daily case counts of nearly 30,000.

“The average Joe Public is interpreting what the CDC is saying as ‘This is done. It’s over,’” said Dr. Michael Mina of Harvard University, a leading advocate of widespread, rapid testing.

With more than 60% of Americans not fully vaccinated, he thinks screening of those without symptoms still has a role, particularly among front-line workers who have to deal with the public.

CDC Director Dr. Rochelle Walensky said the updated guidelines are based on studies showing the robust effectiveness of the vaccine in preventing disease in various age groups and settings. Even when vaccinated people do contract COVID-19, their infections tend to be milder, shorter and less likely to spread to others.

As a result, the CDC says vaccinated people can generally be excluded from routine workplace screening for COVID-19.

That change could eliminate testing headaches like the one recently reported by the New York Yankees, when one player and several staffers tested positive on a highly sensitive COVID-19 test, despite being vaccinated.

Baseball officials are discussing whether to drop or reduce testing of people who have no symptoms.

But widespread attempts to waive testing for vaccinated people could face the same dilemma seen with the CDC’s new guidelines on masks: There’s no easy way to determine who has been vaccinated and who hasn’t.

Employers can legally require vaccinations for most workers, though few have tested that power, since the vaccines don’t yet have full regulatory approval. Even asking employees to disclose their vaccination status is viewed as intrusive by many employment-law specialists.

For now, testing appears to be continuing unchanged in places that adopted the practice, from offices to meatpacking plants to sports teams.

Pork producer Smithfield Foods said it continues to conduct a combination of mandatory and optional testing for employees, depending on conditions at work sites. Amazon said it will still offer regular, voluntary testing.

The NBA has indicated it plans to keep its testing system in place for now. The league has been praised for using rigorous testing to create COVID-19-free “bubbles” around players, coaches and staff.

On a national level, the supply of COVID-19 tests now vastly surpasses demand. U.S. officials receive reports of about 1 million tests per day, down from a peak of over 2 million in mid-January, though many rapid tests done at home and workplaces go uncounted.

Consumers can buy 15-minute, over-the-counter tests at pharmacies and other stores. That’s on top of increased capacity from U.S. laboratories and hospitals, which ramped up testing after last year’s crushing demand.

The U.S. will be capable of conducting 500 million monthly tests in June, according to researchers at Arizona State University.

As recently as this winter, many health experts were calling for a huge testing effort to safely reopen schools, offices and other businesses. But that was before it was known how effective the vaccine would be in the real world, how quickly it could be distributed and whether it would protect against variants.

“The vaccines overperformed, which is the best news possible,” said Dr. Jeffrey Engel of the Council of State and Territorial Epidemiologists. “So now you can begin to peel back some of these other layers of mitigation like mask use and screening.”

Congress set aside $46 billion in the last pandemic relief package to boost testing, particularly in schools. But with all Americans 12 and older now eligible for shots, many middle and high school students will be fully vaccinated when they return to classrooms in the fall.

And many school systems have already rejected routine testing for elementary students, since children rarely become seriously ill and a positive test can trigger disruptive quarantines.

Some states have even returned federal testing funds, preferring simpler measures such as mask wearing and social distancing.

The number of international homebuyers declined sharply throughout the United States in the past year amidst the global COVID-19 pandemic, according … END_OF_DOCUMENT_TOKEN_TO_BE_REPLACED

Tom Rodeno, 50, a 20-year veteran in representing industrial spaces for Colliers International, based out of the Rosemont office with the title of … END_OF_DOCUMENT_TOKEN_TO_BE_REPLACED

Chicago’s city officials move the deadline for submitting a proposal for the planned casino to October 29, looking for more bidders. Chicago … END_OF_DOCUMENT_TOKEN_TO_BE_REPLACED

A community in western Illinois has officially disbanded its police department over budget concerns. East Galesburg has been without its police … END_OF_DOCUMENT_TOKEN_TO_BE_REPLACED

The officer who died was the first Chicago cop shot and killed in the line of duty this year, Brown said. It's the first line-of-duty shooting … END_OF_DOCUMENT_TOKEN_TO_BE_REPLACED