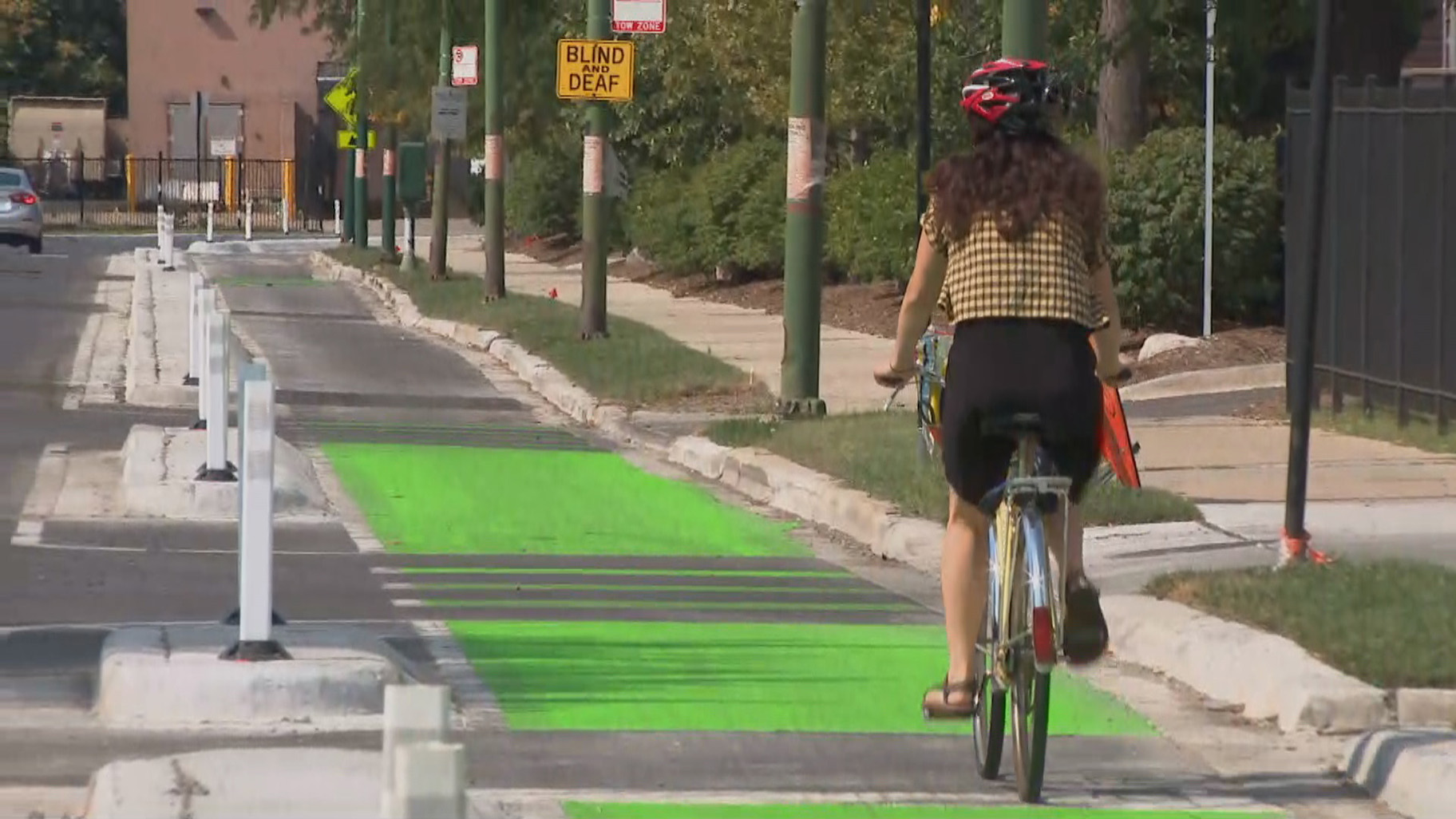 The city’s transportation department has been installing a new grid of bike routes in Belmont Cragin and Hermosa, two predominantly Latino neighborhoods on the West Side, as part of the Chicago Works Capital Plan launched in April.

“These processes for transportation improvements can often seem very opaque and feel inaccessible to local residents,” said Lynda Lopez,  Advocacy Manager for Active Transportation Alliance, and Transportation Equity Network co-chair. “I think the Belmont Cragin project had a lot of engagement from community residents, and they were leading with their own ideas and had a lot of say in the process.”

Lopez says the collaborative process behind this project – which also included the Northwest Side Housing Center  – has been unique. She says residents who were a part of the planning process had a chance to look at their community maps and weigh in on biking and walking in the area.

“That was really valuable to have residents share that with transportation planners who are going to be bringing these improvements into their community but might not have that lived experience,” Lopez said.

The city’s transportation department has been installing a new grid of bike routes in Belmont Cragin and Hermosa, two predominantly Latino neighborhoods on the West Side, as part of the Chicago Works Capital Plan launched in April. (Courtesy of CDOT)


This expansion also includes installations of new Divvy bikes in the area.

“I think CDOT is trying to address the inequities that exist with the distribution of the divvy bikes and costs,” said Jacky Grimshaw, vice president of government affairs at the Center for Neighborhood Technology, and The Transportation Equity Network co-chair. “They have made accommodations lowering the cost for low-income communities to be able to afford Divvy.”

Grimshaw believes the South and West Sides are areas that need more transportation options including biking.

The Transportation Equity Network was involved with the Chicago Department of Transportation (CDOT) in developing its strategic plan. The organizations that advised CDOT indicated they needed more protected bike lanes on the South and West Sides and according to Grimshaw, CDOT has committed to implement these recommendations.

“Hopefully with the Capital funding that’s available already, as well as the funds coming in from the federal government, we’ll be able to create those highways on the South and West Side,” Grimshaw said.

The number of international homebuyers declined sharply throughout the United States in the past year amidst the global COVID-19 pandemic, according … END_OF_DOCUMENT_TOKEN_TO_BE_REPLACED

Tom Rodeno, 50, a 20-year veteran in representing industrial spaces for Colliers International, based out of the Rosemont office with the title of … END_OF_DOCUMENT_TOKEN_TO_BE_REPLACED

Chicago’s city officials move the deadline for submitting a proposal for the planned casino to October 29, looking for more bidders. Chicago … END_OF_DOCUMENT_TOKEN_TO_BE_REPLACED

A community in western Illinois has officially disbanded its police department over budget concerns. East Galesburg has been without its police … END_OF_DOCUMENT_TOKEN_TO_BE_REPLACED

The officer who died was the first Chicago cop shot and killed in the line of duty this year, Brown said. It's the first line-of-duty shooting … END_OF_DOCUMENT_TOKEN_TO_BE_REPLACED