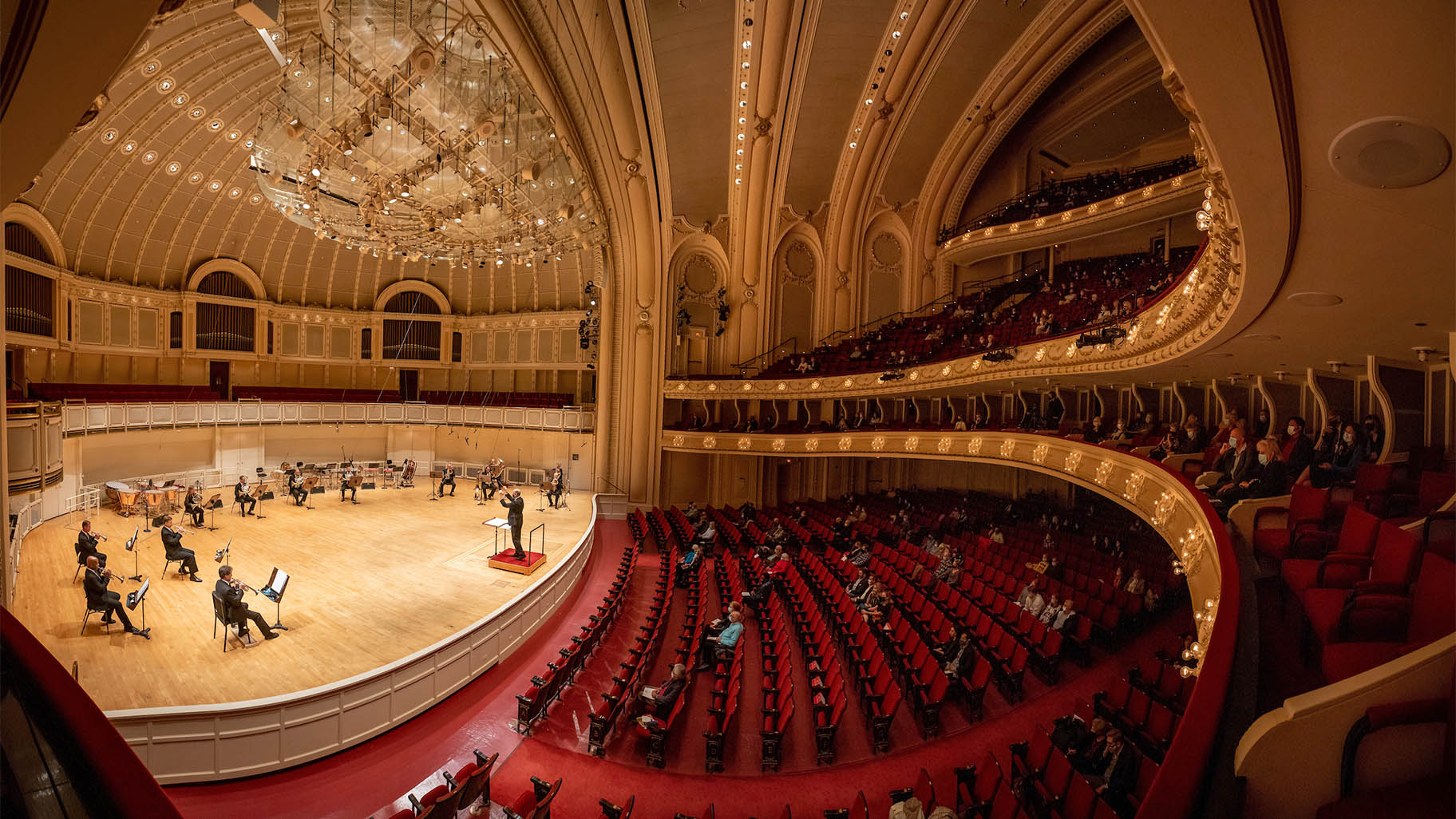 A socially distanced, reduced-capacity audience listens to the sounds of the CSO brass at the concert that signaled the return of Chicago Symphony Orchestra concerts, May 27, 2021. (Credit Anne Ryan)


The sense of pure elation was palpable Thursday evening as members of the Chicago Symphony Orchestra walked onstage to perform their first concert before a live audience in more than 14 months.

The orchestra, like the audience, was reduced in size (about 20 musicians in various combinations, along with a number of guest artists), with only its altogether golden brass and percussion sections positioned in a grand semicircle on Symphony Center’s Orchestra Hall stage. But their sound was as full and beautiful as ever as they played a meticulously chosen program of works by five American composers (all under the umbrella title of “Fanfare”) that alternately heralded a triumphant return and evoked the emotional turmoil of the pandemic era. The expert conductor for the evening was Michael Mulcahy, a trombonist with the CSO for more than three decades.

There could have been no more ideal opener than Aaron Copland’s brief but rousing “Fanfare for the Common Man” with its initial blast of timpani followed by the blazing sound of horns. Written in 1942 in response to the entry of the U.S. into World War II, it now suggests an optimism and determination to carry on in the aftermath of the pandemic’s many losses.

It was followed by Gunther Schuller’s fascinating, intensely difficult, mood-shifting and all too rarely heard work, “Symphony for Brass and Percussion,” an ideal showcase for this gathering of musicians.

The four movement work, dating from 1950,  is set in motion with a dissonant opening crash before shifting into a solemn and mysterious sound that now seems custom-made to suggest the strange emotional chaos of the past year with the use of the many and varied voices of the brass. It was also a reminder that while string and wind instruments are often said to echo the human voice, the power of human breath (so compromised by COVID-19), is of the essence in the brass section. The Vivace movement of the piece is alternately playful and wild with its eccentric rhythms and riffs, while the third movement has a haunting opening and distanced sound that suggests a mournful sense of isolation. The final Allegro movement opens with a percussive blast, with the brass generating a consistently agitated and momentous state in this fascinating modernist, yet wholly accessible work.

It was followed by “Street Song for Symphonic Brass,” a 1988 piece (wholly new to me) by Michael Tilson-Thomas, who is best known as a conductor. A wonderful surprise that begins with its own form of fanfare, it is full of stops and starts and counterpoint sequences. At moments richly lyrical and subtly romantic, it conjures a beguiling calm awakening even as it is accented with hints of jazz and dissonance. A wholly captivating piece, it left me thinking that in the hands of the right choreographer it could also serve as a wonderful contemporary ballet score.

Closing the program (which was just over an hour in length, with no intermission for safety’s sake), was the ideally titled Presto barbaro (fast and barbarous) section of Leonard Bernstein’s film score for “On the Waterfront,” with its memorably brutal evocation of life among New York longshoremen and mobsters in the 1950s. Bernstein’s terrific sense of theater is at work here, with powerful percussion riffs and an overall explosion of sound that ideally suggests a violent environment.

A richly adorned version of the familiar “Happy Birthday” song (arranged by Timothy Higgins, a composer and trombonist with the San Francisco Symphony) served as a little surprise offering in advance of Maestro Riccardo Muti’s 80th birthday this July 28.

This “Fanfare” program (which will be repeated Saturday at 7:30 p.m. and Sunday at 3 p.m., but is already filled to its restricted capacity), is the first of three different concerts, with “Strum” (running June 3-6) and “Overture” (June 10-13) to follow. For details and tickets visit cso.org.

And one final note: For those who still prefer virtual concerts there is the superb ongoing CSOtv Sessions series which continues into July, and is available via  www.CSO.org/tv. And of course, the orchestra is slated to return to the Ravinia Festival this summer, so visit www.ravinia.org for those tickets.

The number of international homebuyers declined sharply throughout the United States in the past year amidst the global COVID-19 pandemic, according … END_OF_DOCUMENT_TOKEN_TO_BE_REPLACED

Tom Rodeno, 50, a 20-year veteran in representing industrial spaces for Colliers International, based out of the Rosemont office with the title of … END_OF_DOCUMENT_TOKEN_TO_BE_REPLACED

Chicago’s city officials move the deadline for submitting a proposal for the planned casino to October 29, looking for more bidders. Chicago … END_OF_DOCUMENT_TOKEN_TO_BE_REPLACED

A community in western Illinois has officially disbanded its police department over budget concerns. East Galesburg has been without its police … END_OF_DOCUMENT_TOKEN_TO_BE_REPLACED

The officer who died was the first Chicago cop shot and killed in the line of duty this year, Brown said. It's the first line-of-duty shooting … END_OF_DOCUMENT_TOKEN_TO_BE_REPLACED