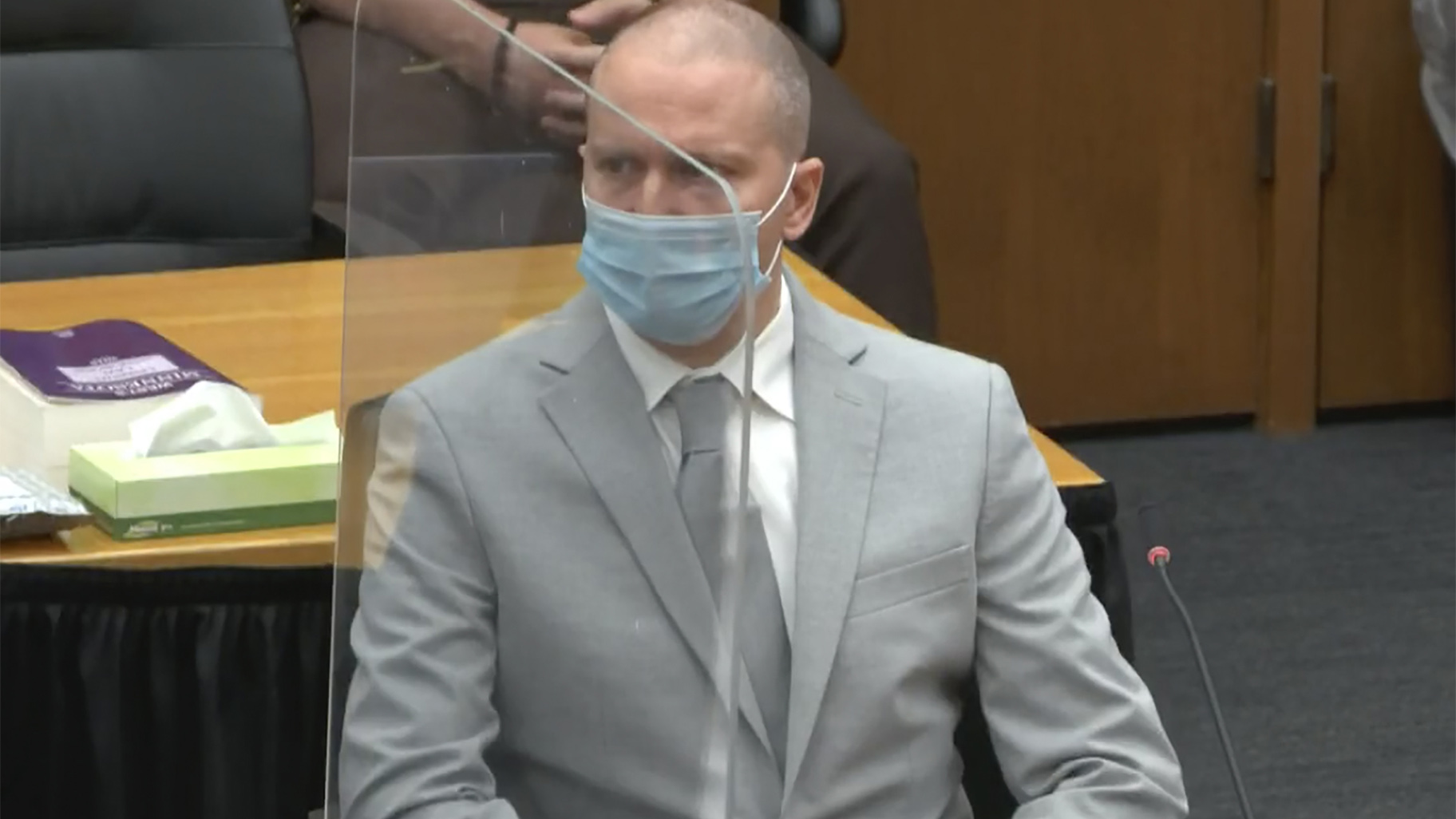 
MINNEAPOLIS (AP) — Former Minneapolis police Officer Derek Chauvin has been sentenced to 22 1/2 years in prison for the murder of George Floyd, whose dying gasps under Chauvin’s knee led to the biggest outcry against racial injustice in the U.S. in generations.

The punishment handed out Friday fell short of the 30 years that prosecutors had requested.

With good behavior, Chauvin, 45, could be paroled after serving two-thirds of his sentence, or about 15 years.

THIS IS A BREAKING NEWS UPDATE. AP’s earlier story follows below.

MINNEAPOLIS (AP) — George Floyd’s family spoke in court Friday of the pain they felt over his murder and asked for the maximum punishment for former Officer Derek Chauvin as Chauvin faced sentencing for the crime that set off a fierce reckoning over racial injustice in America.

“We don’t want to see no more slaps on the wrist. We’ve been through that already,” said a tearful Terrence Floyd, one of Floyd’s brothers.

Floyd’s nephew Brandon Williams said: “Our family is forever broken.” And Floyd’s 7-year-old daughter, Gianna, in a video played in court, said that if she could say something to her father now, it would be: “I miss you and and I love you.”

Chauvin, 45, faced a potential decadeslong sentence, with some legal experts predicting 20 to 25 years. He is also awaiting trial on federal civil rights charges in Floyd’s death, along with three other fired officers who have yet to have their state trials.

Prosecutor Matthew Frank asked the judge to exceed sentencing guidelines and give Chauvin 30 years in prison, saying “tortured is the right word” for what the officer did to Floyd.

“This is not a momentary gunshot, punch to the face. This is 9½ minutes of cruelty to a man who was helpless and just begging for his life,” Frank said.

Chauvin’s mother, Carolyn Pawlenty, took the stand to plead for mercy for son, saying his reputation has been unfairly reduced to that of “an aggressive, heartless and uncaring person” and a racist.

“I can tell you that is far from the truth,” she told the judge. “I want this court to know that none of these things are true and that my son is a good man.” She added: “Derek, I want you to know I have always believed in your innocence, and I will never waver from that.”

“I will be here for you when you come home,” she said.

The concrete barricades, razor wire and National Guard patrols at the courthouse during Chauvin’s three-week trial in the spring were gone Friday, reflecting an easing of tensions since the verdict in April. Still, there was recognition that the sentencing was another major step forward for Minneapolis since Floyd died on May 25, 2020.

“Between the incident, the video, the riots, the trial — this is the pinnacle of it,” said Mike Brandt, a local defense attorney who closely followed the case. “The verdict was huge too, but this is where the justice comes down.”

Chauvin was convicted of second-degree unintentional murder, third-degree murder and second-degree manslaughter for pressing his knee against Floyd’s neck for up to 9 1/2 minutes as the 46-year-old Black man gasped that he couldn’t breathe and went limp.

Bystander video of Floyd’s arrest on suspicion of passing a counterfeit $20 bill at a corner store prompted protests around the world and led to scattered violence in Minneapolis and beyond.

Minnesota sentencing guideline s called for 12 1/2 years, but Judge Peter Cahill agreed with prosecutors ahead of Friday’s proceedings that there were aggravating circumstances that could justify a heavier punishment — among them, that Chauvin treated Floyd with particular cruelty, abused his position of authority as a police officer and did it in front of children.

The defense requested probation, saying Chauvin was the product of a “broken” system and “believed he was doing his job.”

With good behavior, Chauvin could get out on parole after serving about two-thirds of his sentence.

Before the sentencing, the judge denied Chauvin’s request for a new trial. Defense attorney Eric Nelson had argued that the intense publicity tainted the jury pool and that the trial should have been moved away from Minneapolis.

The judge also rejected a defense request for a hearing into possible juror misconduct. Nelson had accused a juror of not being candid during jury selection because he didn’t mention his participation in a march last summer to honor the Rev. Martin Luther King Jr. Prosecutors countered the juror had been open about his views.

Ben Crump, an attorney for the family, said relatives were “anxious and tense” ahead of the proceedings. “To us, George Floyd is a cause. He’s a case. He’s a hashtag. To them — that’s their flesh and blood. You know, that that’s their brother,” Crump said.

It was unclear whether Chauvin would break his long silence and speak at his sentencing. Some experts expressed doubt he would say anything because of the risk his words could be used against him in the federal case. No date for that trial has been set.

But Brandt said Chauvin could say a few words without getting into legal trouble. “I think it’s his chance to tell the world, ‘I didn’t intend to kill him,’” the attorney said. “If I was him, I think I would want to try and let people know that I’m not a monster.”

Chauvin did not testify at his trial. The only explanation the public heard from him came from body-camera footage in which he told a bystander at the scene: “We got to control this guy ‘cause he’s a sizable guy … and it looks like he’s probably on something.”

Philip Stinson, a criminal justice professor at Bowling Green State University, said 11 non-federal law officers, including Chauvin, have been convicted of murder for on-duty deaths since 2005. The penalties for the nine who were sentenced before Chauvin ranged from from six years, nine months, to life behind bars, with the median being 15 years.

With Chauvin’s sentencing, the Floyd family and Black America faced something of a rarity: In the small number of instances in which officers accused of brutality or other misconduct against Black people have gone to trial, the list of acquittals and mistrials is longer than the list of sentencings after conviction.

In recent years, the acquittals have included officers tried in the deaths of Philando Castile in suburban Minneapolis and Terence Crutcher in Tulsa, Oklahoma. Two mistrials were declared over the death of Samuel Dubose in Cincinnati.

“That’s why the world has watched this trial, because it is a rare occurrence,” said Arizona-based civil rights attorney Benjamin Taylor, who has represented victims of police brutality. “Everybody knows that this doesn’t happen every day.”

Several people interviewed in Minneapolis before Chauvin’s sentencing said they wanted to see a tough sentence.

Thirty years “doesn’t seem like long enough to me,” said Andrew Harer, a retail worker who is white. “I would be fine if he was in jail for the rest of his life.”

Joseph Allen, 31, who is Black, said he would like to see Chauvin get a life sentence, adding that he hopes other police officers learn “not to do what Derek Chauvin did.”

As for whether she would like to hear Chauvin speak, Levy Armstrong said: “For me as a Black woman living in this community, there’s really nothing that he could say that would alleviate the pain and trauma that he caused. … I think that if he spoke it would be disingenuous and could cause more trauma.”

Chauvin has been held since his conviction at the state’s maximum-security prison in Oak Park Heights, where he has been kept in a cell by himself for his own protection, his meals brought to him.

The three other officers are scheduled for trial in March on state charges of aiding and abetting both murder and manslaughter.

The number of international homebuyers declined sharply throughout the United States in the past year amidst the global COVID-19 pandemic, according … END_OF_DOCUMENT_TOKEN_TO_BE_REPLACED

Tom Rodeno, 50, a 20-year veteran in representing industrial spaces for Colliers International, based out of the Rosemont office with the title of … END_OF_DOCUMENT_TOKEN_TO_BE_REPLACED

Chicago’s city officials move the deadline for submitting a proposal for the planned casino to October 29, looking for more bidders. Chicago … END_OF_DOCUMENT_TOKEN_TO_BE_REPLACED

A community in western Illinois has officially disbanded its police department over budget concerns. East Galesburg has been without its police … END_OF_DOCUMENT_TOKEN_TO_BE_REPLACED

The officer who died was the first Chicago cop shot and killed in the line of duty this year, Brown said. It's the first line-of-duty shooting … END_OF_DOCUMENT_TOKEN_TO_BE_REPLACED