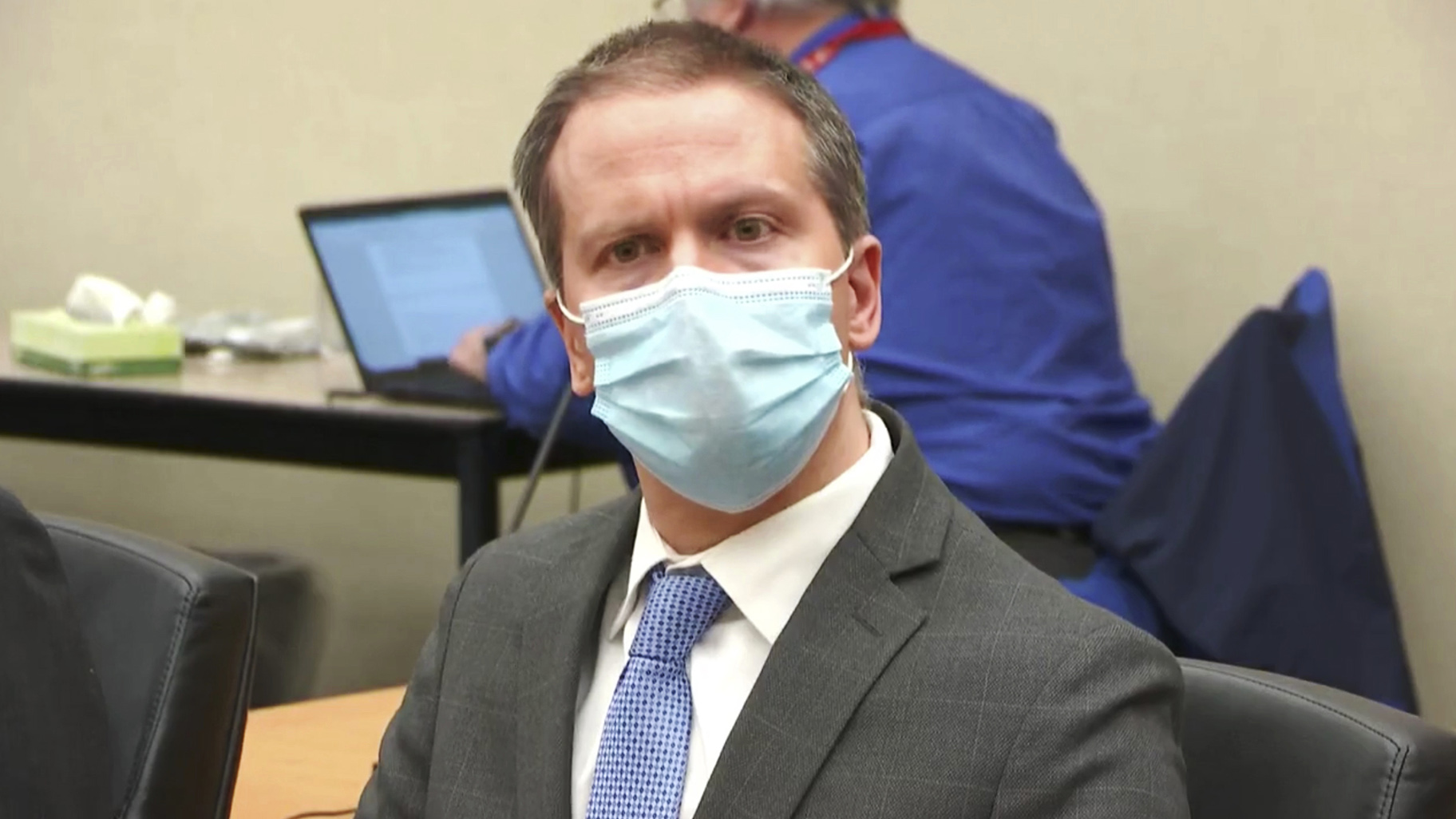 In this image from video, former Minneapolis police Officer Derek Chauvin listens as the verdict is read in his trial for the 2020 death of George Floyd, Tuesday, April 20, 2021, at the Hennepin County Courthouse in Minneapolis, Minn. (Court TV via AP, Pool)


MINNEAPOLIS (AP) — The former Minneapolis police officer convicted of murder in George Floyd’s death is scheduled to make an initial appearance Tuesday in federal court to face charges alleging he violated Floyd’s civil rights by pinning the Black man to the pavement with his knee.

Derek Chauvin, 45, is scheduled to appear in federal court via videoconference from Minnesota’s maximum-security prison in Oak Park Heights, where he’s being held as he awaits sentencing following his April conviction on murder and manslaughter charges.

The federal charges allege Chauvin violated Floyd’s rights as he restrained him face-down while he was handcuffed, not resisting and gasping for air. Three other former officers — J. Kueng, Thomas Lane and Tou Thao — face similar federal charges. Chauvin is also charged in a separate indictment alleging he violated the rights of a 14-year-old boy in 2017.

Floyd, 46, repeatedly said he couldn’t breathe as Chauvin pinned him to the ground. Kueng and Lane helped restrain Floyd — Kueng knelt on Floyd’s back and Lane held down Floyd’s legs. Thao held back bystanders and kept them from intervening during the 9 1/2-minute restraint that was captured on bystander video and led to worldwide protests and calls for change in policing.

While all four officers are charged broadly with depriving Floyd of his rights while acting under government authority, the counts that name Chauvin allege he violated Floyd’s right to be free from unreasonable seizure and from unreasonable force by a police officer. They also allege he and the others deprived Floyd of liberty without due process when they failed to provide him with medical care.

Chauvin’s attorney, Eric Nelson, argued during Chauvin’s murder trial that the officer acted reasonably and Floyd died because of underlying health issues and drug use. He has filed a request for a new trial.

To bring federal charges in deaths involving police, prosecutors must believe an officer acted under the “color of law,” or government authority, and willfully deprived someone’s constitutional rights. That’s a high legal standard. An accident, bad judgment or simple negligence on the officer’s part isn’t enough to support federal charges; prosecutors have to prove the officers knew what they were doing was wrong in that moment but did it anyway.

The federal case sends a strong message about the Justice Department’s priorities. When President Joe Biden was elected, he promised he’d work to end disparities in the criminal justice system. Federal prosecutors have also brought hate crimes charges in the death of 25-year-old Ahmaud Arbery in Georgia, and the Justice Department has launched sweeping investigations into the police departments in Minneapolis and Louisville, Kentucky.

The other indictment against Chauvin alleges he deprived a then-14-year-old boy, who is Black, of his right to be free of unreasonable force when he held the teen by the throat, hit him in the head with a flashlight and held his knee on the boy’s neck and upper back while he was prone, handcuffed and not resisting.

According to a police report from that 2017 encounter, Chauvin wrote that the teen resisted arrest and after the teen, whom he described as 6-foot-2 and about 240 pounds, was handcuffed, Chauvin “used body weight to pin” him to the floor. The boy was bleeding from the ear and needed two stitches.

That encounter was one of several mentioned in state court filings that prosecutors said showed Chauvin had used neck or head and upper body restraints seven times previously dating back to 2014. In four of those instances, state prosecutors said he went too far and held the restraints “beyond the point when such force was needed under the circumstances.”

Chauvin was convicted in April on state charges of second-degree unintentional murder, third-degree murder and second-degree manslaughter in Floyd’s death. Experts say he will likely face no more than 30 years in prison when he is sentenced June 25. If convicted in the federal case, any federal sentence would be served at the same time as his state sentence.

The other former officers face charges of aiding and abetting both second-degree murder and manslaughter. They are free on bond and face state trial in March.

The number of international homebuyers declined sharply throughout the United States in the past year amidst the global COVID-19 pandemic, according … END_OF_DOCUMENT_TOKEN_TO_BE_REPLACED

Tom Rodeno, 50, a 20-year veteran in representing industrial spaces for Colliers International, based out of the Rosemont office with the title of … END_OF_DOCUMENT_TOKEN_TO_BE_REPLACED

Chicago’s city officials move the deadline for submitting a proposal for the planned casino to October 29, looking for more bidders. Chicago … END_OF_DOCUMENT_TOKEN_TO_BE_REPLACED

A community in western Illinois has officially disbanded its police department over budget concerns. East Galesburg has been without its police … END_OF_DOCUMENT_TOKEN_TO_BE_REPLACED

The officer who died was the first Chicago cop shot and killed in the line of duty this year, Brown said. It's the first line-of-duty shooting … END_OF_DOCUMENT_TOKEN_TO_BE_REPLACED