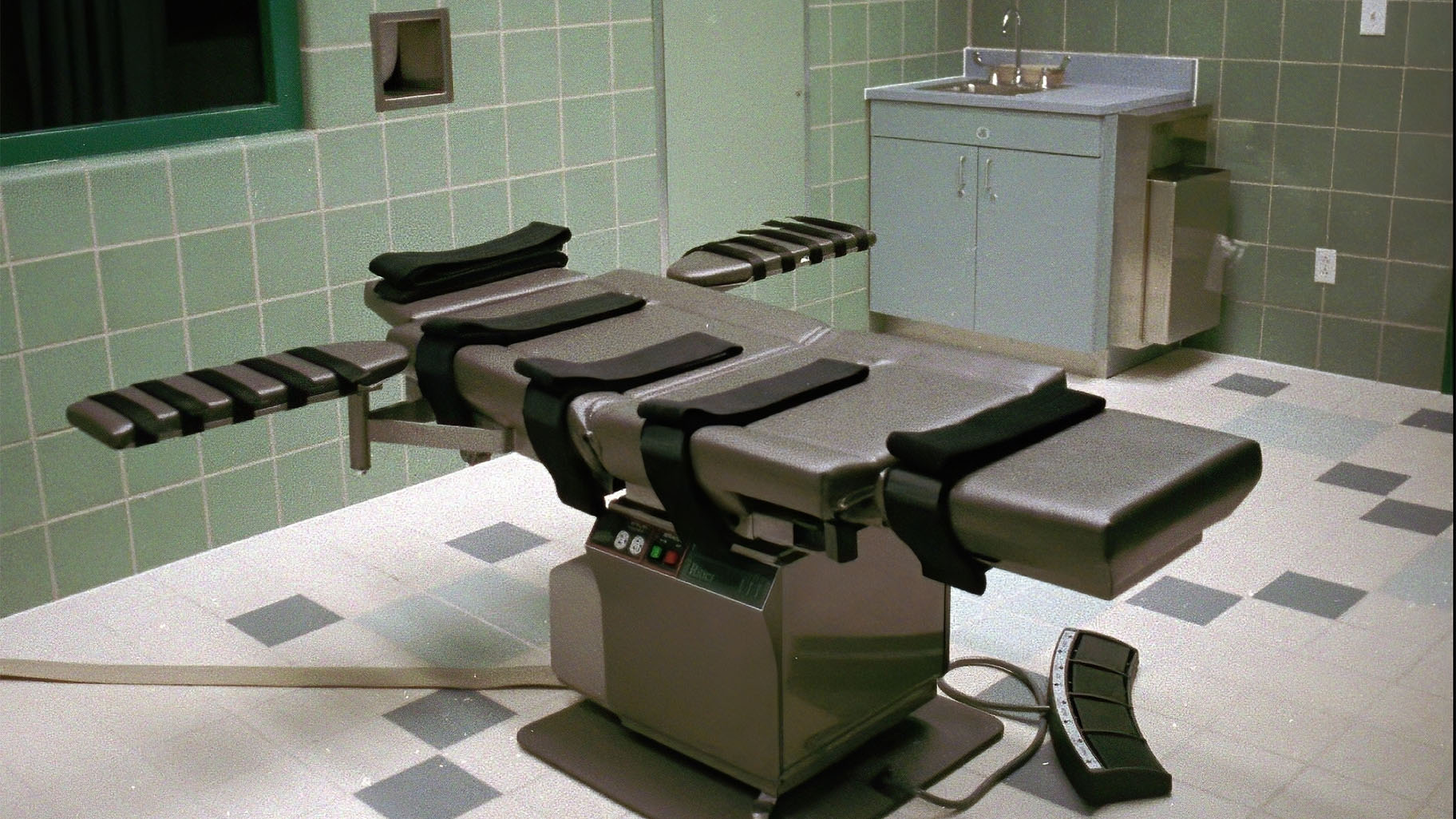 Instead, the White House has been mostly silent.

Biden hasn’t said whether he’d back a bill introduced by fellow Democrats to strike the death penalty from U.S. statutes. He also hasn’t rescinded Trump-era protocols enabling federal executions to resume and allowing prisons to use firing squads if necessary, something many thought he’d do on day one.

And this week, his administration asked the Supreme Court to reinstate the Boston Marathon bomber’s original death sentence.

The hands-off approach in Washington is adding to disarray around the death penalty nationwide as pressure increases in some conservative states to find ways to continue executions amid shortages of the lethal-injection drugs. Worse, some longtime death penalty observers say, is that Biden’s silence risks sending a message that he’s OK with states adopting alternative execution methods.

“Biden’s lack of action is unconscionable,” said Ashley Kincaid Eve, a lawyer and activist who protested outside the Terre Haute, Indiana, prison where the federal inmates were executed. “This is the easiest campaign promise to keep, and the fact he refuses to keep it … is political cowardice.”

His cautious approach demonstrates the practical and political difficulties of ending or truncating capital punishment after it’s been integral to the criminal justice system for centuries, even as popular support for the death penalty among both Democrats and Republicans wanes.

Sup​port for the death penalty among Americans is at near-historic lows after peaking in the mid-1990s and steadily declining since, with most recent polls indicating support now hovers around 55%, according to the nonpartisan Death Penalty Information Center in Washington, D.C.

Biden didn’t make capital punishment a prominent feature of his presidential run, but he did say on his campaign website that he would work “to pass legislation to eliminate the death penalty at the federal level, and incentivize states to follow the federal government’s example.”

That simple-sounding promise was historic because it wasn’t just about the federal death penalty, which, before former President Donald Trump, had been carried out just three times in the previous five decades. Then, 13 federal prisoners were executed during Trump’s last six months in office during the height of the coronavirus pandemic. Biden’s promise also took direct aim at states, which, combined, have executed some 1,500 inmates since the 1970s; 27 states still have death penalty laws.

But the fact that the Biden administration chose to actively push for Dzhokhar Tsarnaev’s execution suggests the president’s opposition to the death penalty isn’t as all-inclusive as many activists believed.

Justice Department lawyers said in court filings Monday that a lower court was wrong to toss the 27-year-old’s death sentence over concerns about the jury selection process, saying the Supreme Court should “put this case back on track toward a just conclusion.”

White House spokesperson Andrew Bates said in an email regarding the Tsarnaev decision that the Justice Department “has independence regarding such decisions.” Bates added that the president “believes the Department should return to its prior practice, and not carry out executions.”

Meanwhile, states have resorted to other means as drugs used in lethal injections have become increasingly hard to procure. Pharmaceutical companies in the 2000s began banning the use of their products for executions, saying they were meant to save lives, not take them. The U.S. Bureau of Prisons has declined to explain how it obtained pentobarbital for the lethal injections under Trump.

Some states have refurbished electric chairs as standbys for when lethal drugs are unavailable. On Wednesday, South Carolina halted two executions until the state could pull together firing squads.

To the disbelief of many, Arizona went so far as to acquire materials to make cyanide hydrogen — the poisonous gas deployed by Nazis to kill 865,000 Jews at Auschwitz — for possible use in the state’s death chamber.

“Execution processes are becoming more and more out of touch with core American values,” Robert Dunham, director of the Death Penalty Information Center, said about Arizona’s purchase. “It provides a very clear picture of what the death penalty has become in the United States.”

Protocols put in place under Trump and not rescinded by Biden allow the U.S. government to employ execution methods sanctioned in states where a federal defendant was sentenced, Dunham said. That means, in theory, federal executioners could also use hydrogen cyanide.

Even if there’s virtually no chance the U.S. government would ever embrace an execution method favored by Nazis, Dunham said the very idea that it’s theoretically possible should horrify Biden administration officials and spur them to act with an even greater sense of urgency.

“This creates another opportunity for the Biden administration to take action,” he said. “Doing nothing puts the U.S. on the books as authorizing these cyanide executions in some instances.”

A federal prosecutor, arguing in litigation over the government’s execution protocols last month, insisted to a judge that the Justice Department would allow some death row inmates to choose their method of execution if they were sentenced in a state where the law would allow that.

Abe Bonowitz, director of the anti-capital punishment group Death Penalty Action, said he and other activists have spoken with administration officials and received some behind-the-scenes assurances that Biden will eventually support legislation to abolish the federal death penalty.

“We know this is not the biggest fish they have to fry right now. But we are hearing they will get to it,” said Bonowitz, who has been critical of Biden’s silence.

The president could take the path of least resistance, politically speaking, by telling his Justice Department not to schedule federal executions during his term. But that would fall far short of fulfilling his campaign promise, and it would leave the door open for future presidents to restart executions.

He could also use his executive powers to commute all federal death sentences to life in prison, but there’s no sign of that happening. Granting full clemency to everyone on death row could be politically problematic for Biden and other Democrats, who have a slim majority in both the House and the Senate. Among those whose lives would be spared by such a Biden order would be Dylann Roof, who killed nine Black church members during a Bible study session in South Carolina and was the first person sentenced to death for a federal hate crime.

After Biden’s inauguration, the question of whether the president would act fast to end capital punishment was a popular topic on federal death row in Terre Haute, where discussions were often conducted through interconnected air vents. It’s not discussed much these days, death row inmate Rejon Taylor told The Associated Press recently through a prison email system.

“I won’t say that skepticism has settled in, but I will say that most no longer feel that immediate action will happen,” said Taylor, who was sentenced in 2008 for killing an Atlanta restaurant owner.

But most inmates, he said, don’t believe they’ll be executed while Biden is president.

The number of international homebuyers declined sharply throughout the United States in the past year amidst the global COVID-19 pandemic, according … END_OF_DOCUMENT_TOKEN_TO_BE_REPLACED

Tom Rodeno, 50, a 20-year veteran in representing industrial spaces for Colliers International, based out of the Rosemont office with the title of … END_OF_DOCUMENT_TOKEN_TO_BE_REPLACED

A community in western Illinois has officially disbanded its police department over budget concerns. East Galesburg has been without its police … END_OF_DOCUMENT_TOKEN_TO_BE_REPLACED

The officer who died was the first Chicago cop shot and killed in the line of duty this year, Brown said. It's the first line-of-duty shooting … END_OF_DOCUMENT_TOKEN_TO_BE_REPLACED