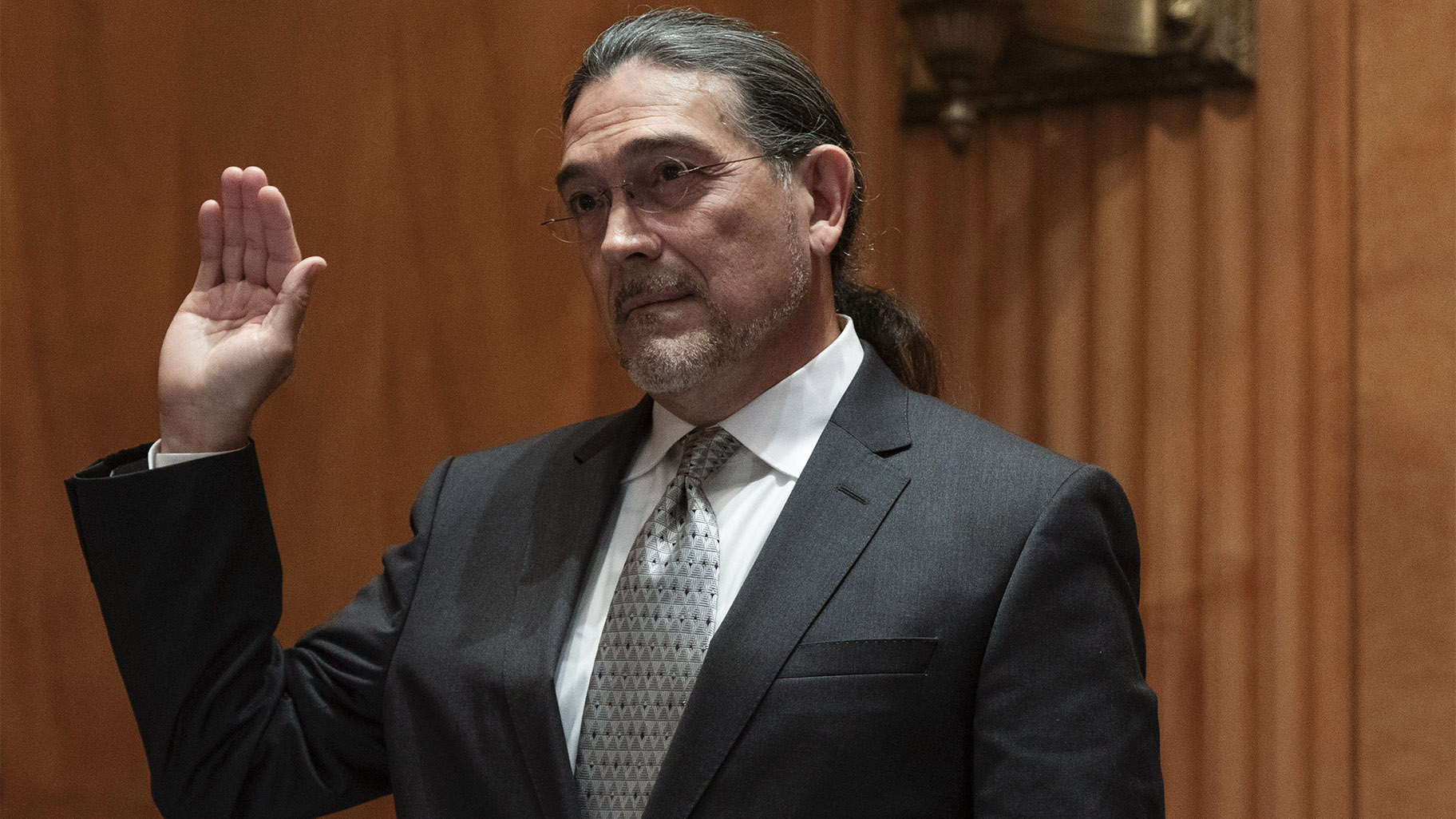 Census Bureau Director nominee Robert Santos is sworn in to testify before the Senate Homeland Security and Governmental Affairs committee, Thursday, July 15, 2021. If confirmed, Robert Santos, a third-generation Mexican American, would be the first person of color to be a permanent head of the nation’s largest statistical agency. (AP Photo / Jacquelyn Martin)


President Joe Biden’s nominee to lead the U.S. Census Bureau told a Senate committee on Thursday that he would bring transparency and independence to the nation’s largest statistical agency, which was challenged by the pandemic, natural disasters and attempts at political interference while carrying out the 2020 census.

If confirmed, Robert Santos, a third-generation Mexican American, would be the first person of color to be a permanent head of the agency.

Santos told members of the Senate Homeland Security and Governmental Affairs Committee that he would rely on technological advances for innovation and would recognize career staffers who “endured a tumultuous 2020.”

Although the director of the Census Bureau is a political position, Santos said he wasn’t a politician. He is a former president of the American Statistical Association and vice president and chief methodologist at the Urban Institute.

The bulk of the work on the 2020 census is over. The numbers that determine how many congressional seats each state gets were released in April, and the figures used for drawing congressional and legislative districts are on schedule to be made public next month.

Much of Santos’ attention, if he is confirmed, will be on preparing for the next once-a-decade census in 2030 and also ongoing demographic and economic surveys.

Sen. Rob Portman, R-Ohio, asked Santos to commit to a Census Bureau goal of releasing the data used for drawing congressional and legislative districts by Aug. 16, almost five months later than planned because of pandemic delays. Ohio sued the agency in an effort to get those numbers released sooner. Under a settlement in May, the Census Bureau reaffirmed that deadline.

“There are people thinking of running for office but they don’t know what their districts will look like because we can’t get the data from the Census Bureau,” Portman said. “It has been a disaster in Ohio, and I’m sure other states feel the same.”

Santos committed “to trying to meet it as much as possible,” but acknowledged not having “the information right now to know where the Census Bureau is at.”

Under questioning from Sen. Alex Padilla, D-Calif., Santos said he would work with the White House budget office on finding a way to combine the race and ethnic background questions on the 2030 census questionnaire. A previous study by the Census Bureau showed that doing so increased response rates by Hispanics, who may be uncertain how to answer the race question because they often are from mixed race and ethnic backgrounds, Padilla said.

The Office of Budget and Management had considered pairing the questions for the 2020 census, but the Trump administration decided to keep the race question separate from the ethnicity one.

“I can use my own personal perspective as a Latino, and I can use my research experience and my leadership position, to work with OMB to be sure that the proper attention is given to that specific issue,” Santos said.

Earlier this week, a group of academic associations and civil rights groups urged a prompt confirmation for Santos.

“His expertise … matches well with the work of the census, especially in the bureau’s work to reach hard-to-count populations such as communities of color,” the academic and civil rights groups wrote in a letter to the Senate committee.

The previous Senate-confirmed director, Donald Trump-appointee Steven Dillingham, resigned in January after facing criticism that he was acceding to the Trump administration’s demand to produce citizenship information at the expense of data quality in the 2020 census. The Biden administration has abandoned that effort.

The agency’s chief operating officer, Ron Jarmin, has been serving as acting director.

The number of international homebuyers declined sharply throughout the United States in the past year amidst the global COVID-19 pandemic, according … END_OF_DOCUMENT_TOKEN_TO_BE_REPLACED

Tom Rodeno, 50, a 20-year veteran in representing industrial spaces for Colliers International, based out of the Rosemont office with the title of … END_OF_DOCUMENT_TOKEN_TO_BE_REPLACED

A community in western Illinois has officially disbanded its police department over budget concerns. East Galesburg has been without its police … END_OF_DOCUMENT_TOKEN_TO_BE_REPLACED

The officer who died was the first Chicago cop shot and killed in the line of duty this year, Brown said. It's the first line-of-duty shooting … END_OF_DOCUMENT_TOKEN_TO_BE_REPLACED