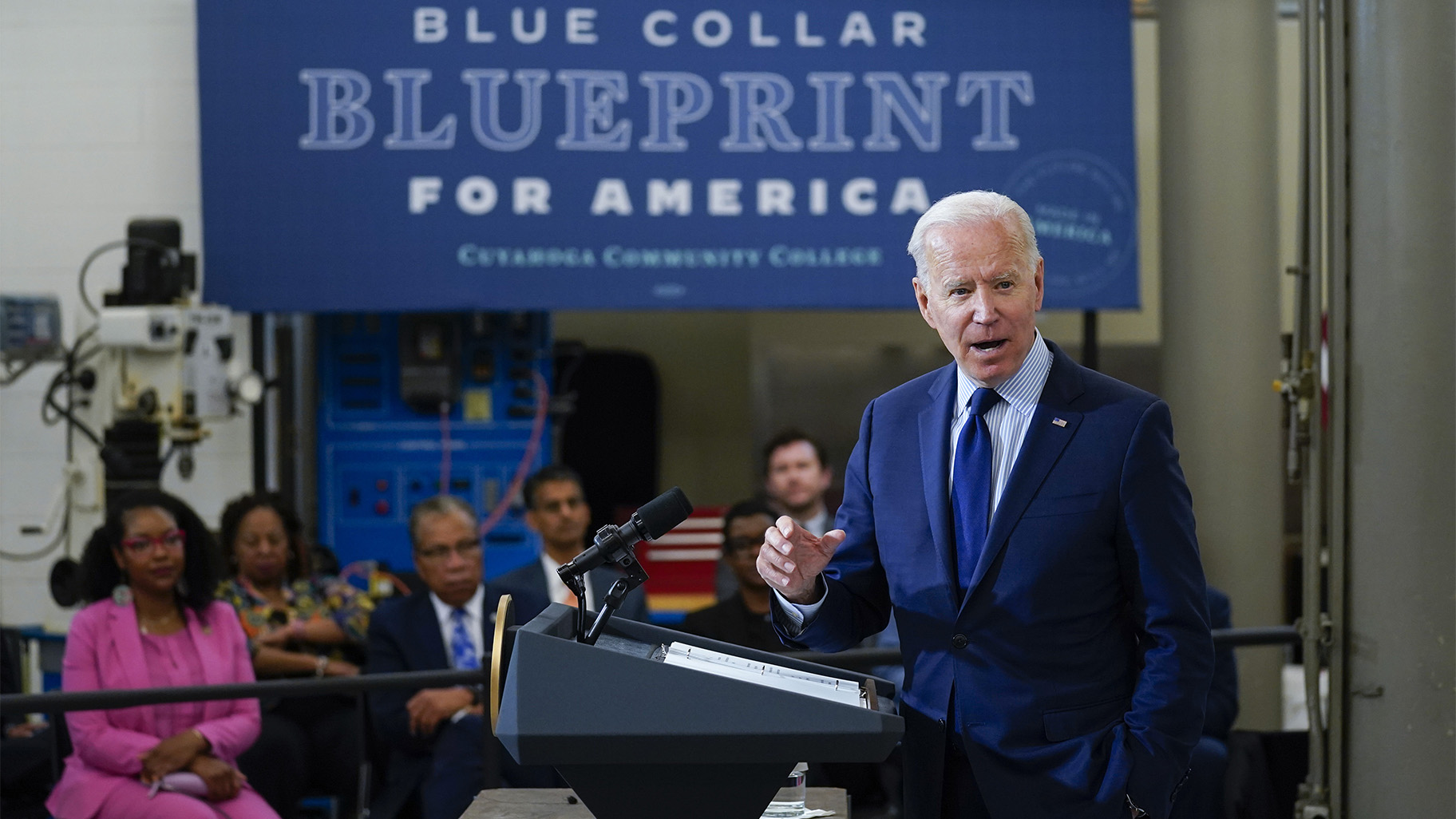 
WASHINGTON (AP) — President Joe Biden on Friday unveiled a $6 trillion budget for next year that’s piled high with new safety net programs for the poor and middle class, but his generosity depends on taxing corporations and the wealthy to keep the nation’s spiking debt from spiraling totally out of control.

Biden has already described, in general terms, major plans on infrastructure and he won a major victory on COVID-19 relief earlier this year. But Friday’s rollout tallies up the costs and incorporates them into the government’s existing budget framework, including Social Security and Medicare, to provide a fuller view of the administration’s fiscal posture.

The whopping deficit projections reflect a government with steadily accumulating debt that has topped $28 trillion after well over $5 trillion in already approved COVID-19 relief, which would require the government to borrow roughly 50 cents of every dollar it spends this year and next. With the government’s structural deficit remaining unchecked, Biden would use proposed tax hikes on businesses and high-earning people to power huge new social programs like universal prekindergarten, large subsidies for child care and guaranteed paid leave.

“The best way to grow our economy is not from the top down, but from the bottom up and the middle out,” Biden said in his written budget message. “Our prosperity comes from the people who get up every day, work hard, raise their family, pay their taxes, serve their Nation, and volunteer in their communities.”

The budget incorporates the administration’s eight-year, $2.3 trillion infrastructure proposal and its $1.8 trillion American Families Plan and adds details on his $1.5 trillion request for annual operating expenditures for the Pentagon and domestic agencies.

“Together, these … will be transformational: Strengthening our economy, boosting American competitiveness, and delivering shared prosperity and economic security,” said acting White House budget chief Shalanda Young. She called the Biden plan a “budget that puts these pieces together and does exactly what the president told the country he would do. Grow the economy, create jobs and do so responsibly by requiring the wealthiest Americans and big corporations to pay their fair share.”

Biden’s budget is sure to give Republicans fresh ammunition for their criticisms of the new Democratic administration as bent on a “tax and spend” agenda that would damage the economy and impose a crushing debt burden on younger Americans. And he’s facing a very nettlesome fight with Republicans who say he’s shorting the military.

Veteran GOP Sen. Richard Shelby, whose help is needed to pass annual agency budget bills, blasted Biden’s plan as “a blueprint for the higher taxes, excessive spending, and disproportionate funding priorities.” He added that it “completely disregards our debt of more than $28 trillion, yet somehow still shortchanges our national security.”

Biden is a veteran of a long-gone Washington that fought bitterly in the 1980s and 1990s to wrestle the deficit under control. But there hasn’t been any real effort to stem the flow of red ink since a tea party-driven moment in 2011 that produced unpopular automatic spending cuts.

Huge deficits have yet to drive up interest rates as many fiscal hawks have feared, however, and genuine anti-deficit sentiment is difficult to find in either political party.

The unusual timing of the budget rollout — the Friday afternoon before Memorial Day weekend — indicates that the White House isn’t eager to trumpet the bad deficit news. Typically, lawmakers host an immediate round of hearings on the budget, but those will have to wait until Congress returns from a weeklong recess.

Under Biden’s plan, the debt held by the public would quickly match the size of the economy and soon eclipse record levels of debt relative to gross domestic product that have stood since World War II. That’s despite more than $3 trillion in proposed tax increases over the decade, including an increase in the corporate tax rate from 21% to 28%, increased capital gains rates on top earners and returning the top personal income tax bracket to 39.6%.

Like all presidential budgets, Biden’s plan is simply a proposal. It’s up to Congress to implement it through tax and spending legislation and annual agency budget bills. With Democrats in control of Capitol Hill, albeit barely, the president has the ability to implement many of his tax and spending plans, though his hopes for awarding greater increases to domestic agencies than to the Pentagon are sure to hit a roadblock with Republicans.

Some Democrats are already balking at Biden’s full menu of tax increases, imperiling his ability to pay for his ambitious social spending. And his plans to increase spending on domestic Cabinet agencies by 16% while limiting defense to a 1.7% increase is politically impossible in the 50-50 Senate.

On Thursday, a top Senate ally, Appropriations Committee Chairman Patrick Leahy, D-Vt., called for bipartisan talks to start the annual appropriations bills. There’s incentive for both GOP defense hawks and liberal Democrats like Leahy to bargain since the alternative is a long-term freeze at current spending levels.

The Biden plan comes as the White House is seeking an agreement with Senate Republicans over infrastructure spending. There are growing expectations that he may have to go it alone and pass his plans by relying on support from his narrow Democratic majorities in both the House and Senate.

The flood of Biden’s spending proposals includes numerous new programs to strengthen the “caring economy” with large programs aimed at child and elder care: $437 billion over 10 years to provide free preschool to all 3- and 4-year-olds and two years of free community college to all Americans. Also, $225 billion would subsidize child care to allow many to pay a maximum of 7% of their income for all children under age 5.

Another $225 billion over the next decade would create a national family and medical leave program, while $200 billion would make recently enacted subsidy increases under the Obama health care law permanent.

Tax hikes, Biden claims, would pay for his initiatives over the next 15 years, including $2 trillion from corporations from curbing overseas tax preferences and raising rates to 28%.

The increases would drive federal spending to about 25% of the entire economy, while the tax boosts would mean revenues approaching 20% of the size of the economy once implemented.

Republicans concerns about the deficit are voiced chiefly when Democrats are in power, and the Biden budget gives them ammunition to attack.

Council of Economic Advisers Chair Cecelia Rouse told reporters Friday that the economy is outperforming the budget’s promises of 5.2% economic growth this year.

The number of international homebuyers declined sharply throughout the United States in the past year amidst the global COVID-19 pandemic, according … END_OF_DOCUMENT_TOKEN_TO_BE_REPLACED

Tom Rodeno, 50, a 20-year veteran in representing industrial spaces for Colliers International, based out of the Rosemont office with the title of … END_OF_DOCUMENT_TOKEN_TO_BE_REPLACED

Chicago’s city officials move the deadline for submitting a proposal for the planned casino to October 29, looking for more bidders. Chicago … END_OF_DOCUMENT_TOKEN_TO_BE_REPLACED

A community in western Illinois has officially disbanded its police department over budget concerns. East Galesburg has been without its police … END_OF_DOCUMENT_TOKEN_TO_BE_REPLACED

The officer who died was the first Chicago cop shot and killed in the line of duty this year, Brown said. It's the first line-of-duty shooting … END_OF_DOCUMENT_TOKEN_TO_BE_REPLACED