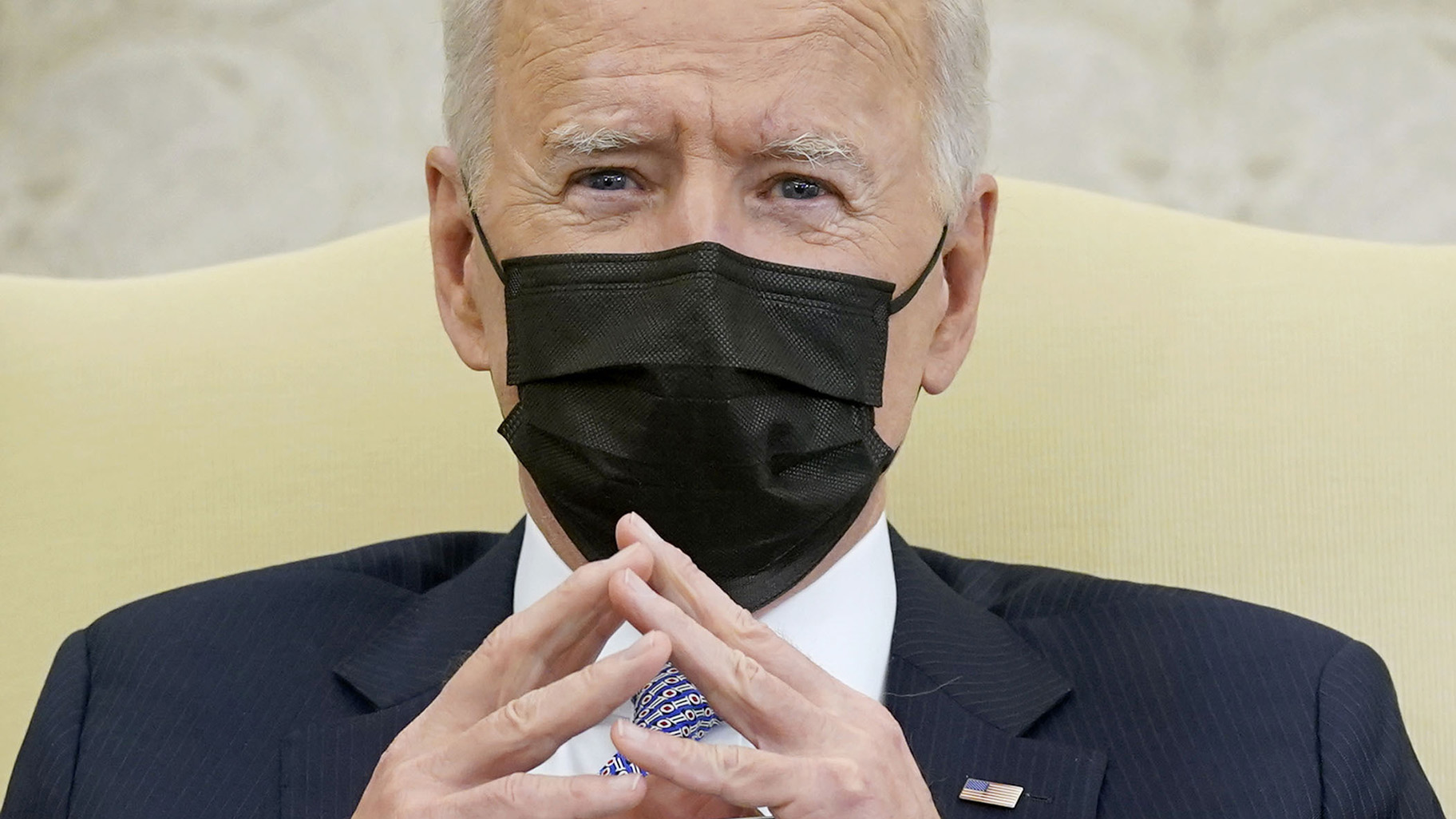 In this April 12, 2021, file photo President Joe Biden speaks during a meeting with lawmakers to discuss the American Jobs Plan in the Oval Office of the White House in Washington. (AP Photo / Patrick Semansky, File)


WASHINGTON (AP) — Marking his first 100 days in office, President Joe Biden will use his first joint address to Congress to pitch a $1.8 trillion investment in children, families and education that would fundamentally transform the role government plays in American life.

Biden will make his case Wednesday night before a pared-down gathering of mask-wearing legislators due to coronavirus restrictions and in a U.S. Capitol still surrounded by black fencing after insurrectionists protesting his election occupied the very dais where he will stand.

In the nationally televised ritual of a president standing before Congress, Biden will lay out a sweeping proposal for universal preschool, two years of free community college, $225 billion for child care and monthly payments of at least $250 to parents. His ideas reflect the frailties that were uncovered last year by the pandemic, and he will make the case that economic growth would best come from taxing the rich to help the middle class and the poor.

His speech will also provide an update on progress in combating the COVID-19 crisis he was elected to tame, showcasing hundreds of millions of vaccinations and relief checks delivered to help offset the devastation wrought by a virus that has killed more than 573,000 people in the United States. He will also champion his $2.3 trillion infrastructure plan, a staggering figure to be financed solely by higher taxes on corporations.

Seizing an opportunity born of generational calamity, Biden has embraced momentous action over incremental progress, with the goal of making the economy fairer and stronger. But he will be forced to thread the needle between Republicans who cry government overreach and some Democrats who fear he won’t go big enough.

The Democratic president’s strategy is to sidestep the polarization and make his appeal directly to voters. His prime-time speech will underscore a trio of central campaign promises: to manage the deadly pandemic, to turn down the tension in Washington and to restore faith in government as an effective force for good.

“He is a big-government Democrat, and he has not been at all reluctant to propose big initiatives in a response to a national crisis,” said Julian Zelizer, a Princeton University presidential historian.

No American politician has more familiarity with the presidential address to Congress than Biden. He spent three decades in the audience as a senator and another eight years seated behind President Barack Obama during the annual address when he was vice president.

For the first time on Wednesday, a female vice president, Kamala Harris, will be seated behind the chief executive for the speech.

Biden also knows that most of those seated before him have, like he did, looked at the president and envisioned themselves one day in his place. He has heard the memorable phrases and the long list of promises — often unmet — and seen the partisan reactions intensify as the years have hurried by.

He chose to delay this speech, typically given in the afterglow of a presidential inaugural. In doing so, he gave himself the chance to not simply speak of the pain of the COVID-19 crisis but also to talk about tangible progress in beating it back.

The setting will be unlike for any of his predecessors, with members of Congress spread out and socially distanced and many Republicans citing “scheduling conflicts” to explain their absence. Senate Republican leader Mitch McConnell said Tuesday that Biden’s presidency “can best be described as the Biden bait and switch.”

“President Biden ran as a moderate, but I’m hard pressed to think of anything at all that he’s done so far that would indicate some degree of moderation,” McConnell said.

Yet the desire for swift action is born from political necessity. Biden understands that the time for passing his agenda could be perilously short given that president’s parties historically lose congressional seats in the midterm elections, less than two years away. The Democrats’ margins are already razor-thin.

Biden will talk to Congress amid the start of a potentially booming recovery, one that could determine whether the U.S. economy can once again fire on all cylinders after a morale-crushing pandemic and a humbling financial crisis with shock waves that linger a dozen years later. He will also use his address to touch on the national reckoning over race in America, and to call on Congress to act on policing reform, gun control and modernizing the nation’s immigration system.

In his first three months in office, Biden signed a $1.9 trillion COVID-19 relief bill — passed without a single GOP vote — and has shepherded direct payments of $1,400 per person to more than 160 million households. Hundreds of billions of dollars in aid will soon arrive for state and local governments, enough money that overall U.S. growth this year could eclipse 6% — a level not seen since 1984. Administration officials are betting that it will be enough to bring back all 8.4 million jobs lost to the pandemic by next year.

Biden’s speech Wednesday is about how to sustain those gains once the debt-financed boost fades. Federal Reserve estimates suggest that the economy will slip to more modest 1.8% growth after at least two years of robust gains, potentially leaving the Biden era with some happy memories but few enduring legacies.

New in his Wednesday speech is a “families” plan that could cement his legacy with $1.8 trillion worth of spending over 10 years.

A significant amount of the proposal would ensure that eligible families receive at least $250 monthly per child through 2025, extending the enhanced tax credit that was part of Biden’s COVID-19 aid. There would be $200 billion for free preschool for all 3- and 4-year-olds. Another $225 billion would pay for subsidized child care and invest in child care workers.

A national paid family and medical leave program would be started at a cost of $225 billion. Another $200 billion would go to permanently reduce health insurance premiums for people who receive coverage through the Affordable Care Act.

For $109 billion, people could attend community college tuition-free for two years. There would be $85 billion for Pell Grants to help more people afford higher education. Historically Black and tribal institutions would be eligible to receive $46 billion.

Funding all of this would be a series of tax increases on the wealthy that would raise about $1.5 trillion over a decade.

Biden wants to boost IRS enforcement and require disclosures by financial institutions, specifically targeting the rich. The White House estimates that would bring in $700 billion over 10 years. He would raise the top tax rate on the most affluent families from 37% to 39.6%. People earning in excess of $1 million a year would see their rate on capital gains — the profits from a sale of a stock or home — nearly double from 20% to 39.6%, which would mean the wealthiest Americans could no longer pay at a lower rate than many families who identify as middle class.

Republican lawmakers in Congress so far have balked at the price tag of both the “families” plan and infrastructure package, complicating the chances of passage in a deeply divided Washington.

The president has drawn a firm red line that no household earning less than $400,000 a year will pay more in taxes, a move that both broadened the definition of the middle class and clearly delineated just how extreme inequality has become.

Economist Owen Zidar, whose research suggested that capital gains tax hikes could raise meaningful revenues, said the programs funded by the proceeds might allow poorer children to become inventors and entrepreneurs, positions that are increasingly reserved for the offspring of wealthy parents.

“There are many missing Einsteins and Elon Musks,” Zidar said.

The number of international homebuyers declined sharply throughout the United States in the past year amidst the global COVID-19 pandemic, according … END_OF_DOCUMENT_TOKEN_TO_BE_REPLACED

Tom Rodeno, 50, a 20-year veteran in representing industrial spaces for Colliers International, based out of the Rosemont office with the title of … END_OF_DOCUMENT_TOKEN_TO_BE_REPLACED

Chicago’s city officials move the deadline for submitting a proposal for the planned casino to October 29, looking for more bidders. Chicago … END_OF_DOCUMENT_TOKEN_TO_BE_REPLACED

A community in western Illinois has officially disbanded its police department over budget concerns. East Galesburg has been without its police … END_OF_DOCUMENT_TOKEN_TO_BE_REPLACED

The officer who died was the first Chicago cop shot and killed in the line of duty this year, Brown said. It's the first line-of-duty shooting … END_OF_DOCUMENT_TOKEN_TO_BE_REPLACED