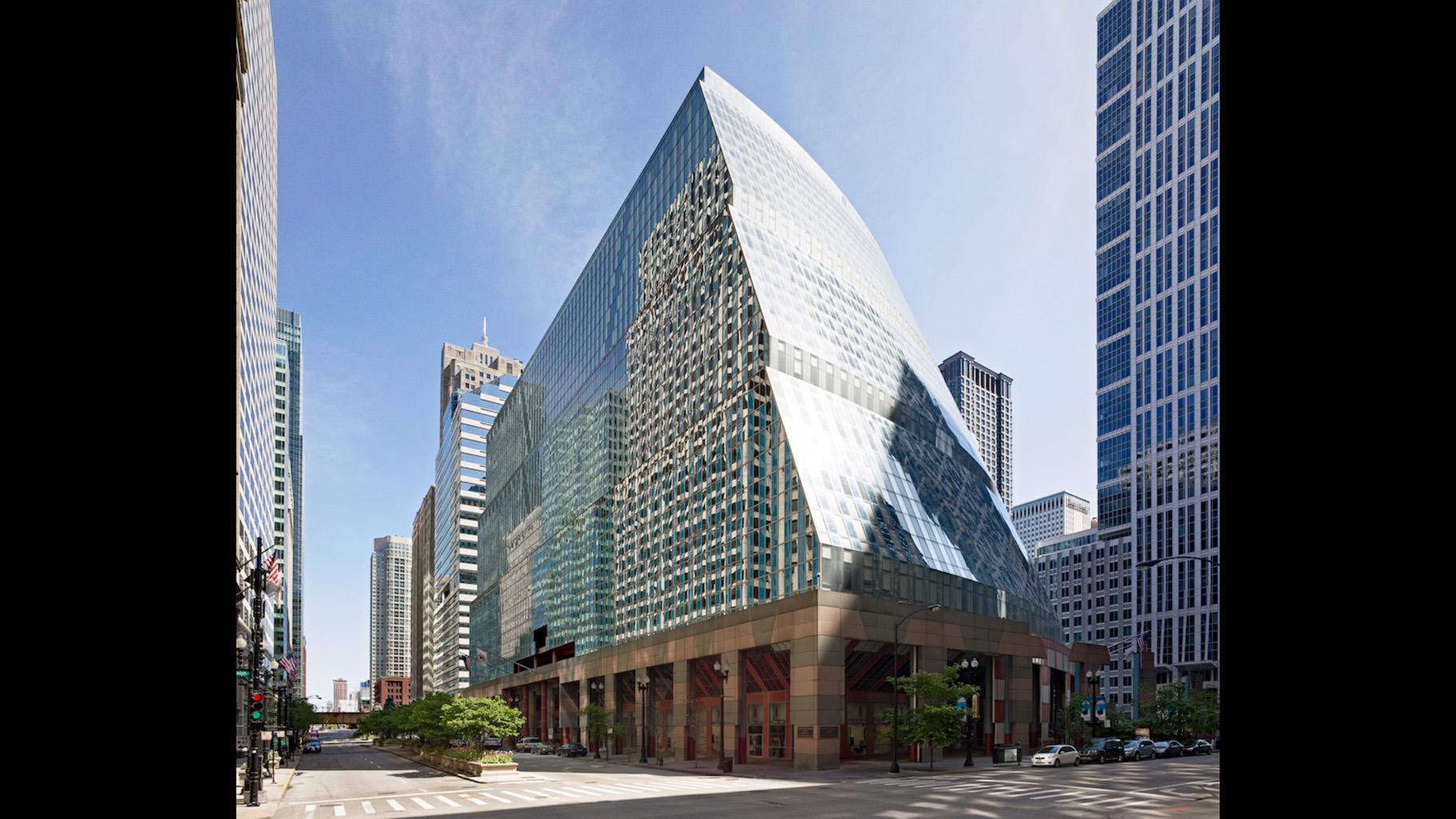 
German architect Helmut Jahn died Saturday after being struck by a car while riding his bicycle in the western suburbs.

Jahn is known for designing groundbreaking buildings all over the world, including many in his adopted city of Chicago.

Geoffrey Baer has more on Jahn’s work and legacy in a special edition of Ask Geoffrey.

Helmut Jahn is best known in Chicago for designing the Thompson Center in the Loop. But there’s a lot more to his story, isn’t there?

There is! The Thompson Center has been controversial since the day it opened and now more than ever with the battle to sell it or save it. More on that in a minute. But Jahn’s buildings can be found all over the city and suburbs – and the world.

The Thompson Center has been controversial since the day it opened and now more than ever with the battle to sell it or save it. (Courtesy Rainer Viertlboeck)

A popular local one is the United Terminal at O’Hare, inspired by the designs of grand old Chicago railway terminals that let in light from the ceiling. Jahn also designed the jazzy subterranean passageway that takes you to a satellite terminal, and even the O’Hare L terminal, using curves and color to bring drama to an otherwise drab underground space.

Then there’s his addition to the Chicago Board of Trade, built directly behind the famous art deco tower that looms over Chicago’s financial district. It’s a shorter, glass version of the older tower complete with the pyramid-shaped roof and ornament on top, echoing the original.

Another is the cascading blue glass of Accenture Tower, which connects to Metra’s Ogilvie Transportation Center. From certain angles, it looks like waves are falling off the building.

Jahn even designed suburban buildings like the “N”-shaped tower that screams Naperville to motorists on I-88.

And when he came to prominence in the late 1970s and early 80s, Jahn’s outsized personality and lifestyle drew nearly as much attention as his buildings.

He even made the cover of GQ Magazine in 1985, and some critics derisively nicknamed him “Flash Gordon” meaning he was a flash in the pan who wouldn’t last. But Jahn embraced the moniker and used the name on a string of racing sailboats he owned.

His bravado was one of the key ingredients to his success, according to Reed Kroloff, dean of the college of architecture at the Illinois Institute of Technology.

“He was, and he was part of a group of people, architects, that became prominent in the latter part of the 20th century, where we invented the term ‘star-chitect,’ where, like a star chef or someone else, the personality became very much a part of the entire package of architecture that was being created,” Kroloff said. “Helmut certainly understood that. He certainly understood how to incorporate the media into his campaign for making buildings.”

Jahn was born and raised in Germany, but really made Chicago his home.

He moved here in the mid-1960s to study under the renowned German-born architect Ludwig Mies van der Rohe at IIT.

The imprint of Mies and other modernists with their restrained, “less is more” philosophy is obvious in what Jahn considered his first building: the McCormick Place convention center on the lakefront. Jahn helped design the project under architect Gene Summers in the late 1960s, after joining the firm of CF Murphy.

Jahn later took over that firm and began pushing back against the strict right angles and dark colors of modernist architecture.

You can see that in some of Jahn’s favorite projects outside the U.S., like the Messeturm tower in Frankfurt – once the tallest building in Europe in the 1990s.

There is also the SONY Center in Berlin, which might remind viewers of the Thompson Center with its soaring atrium and spaceship-like exterior. Jahn considered this complex of eight buildings one of his finest works. 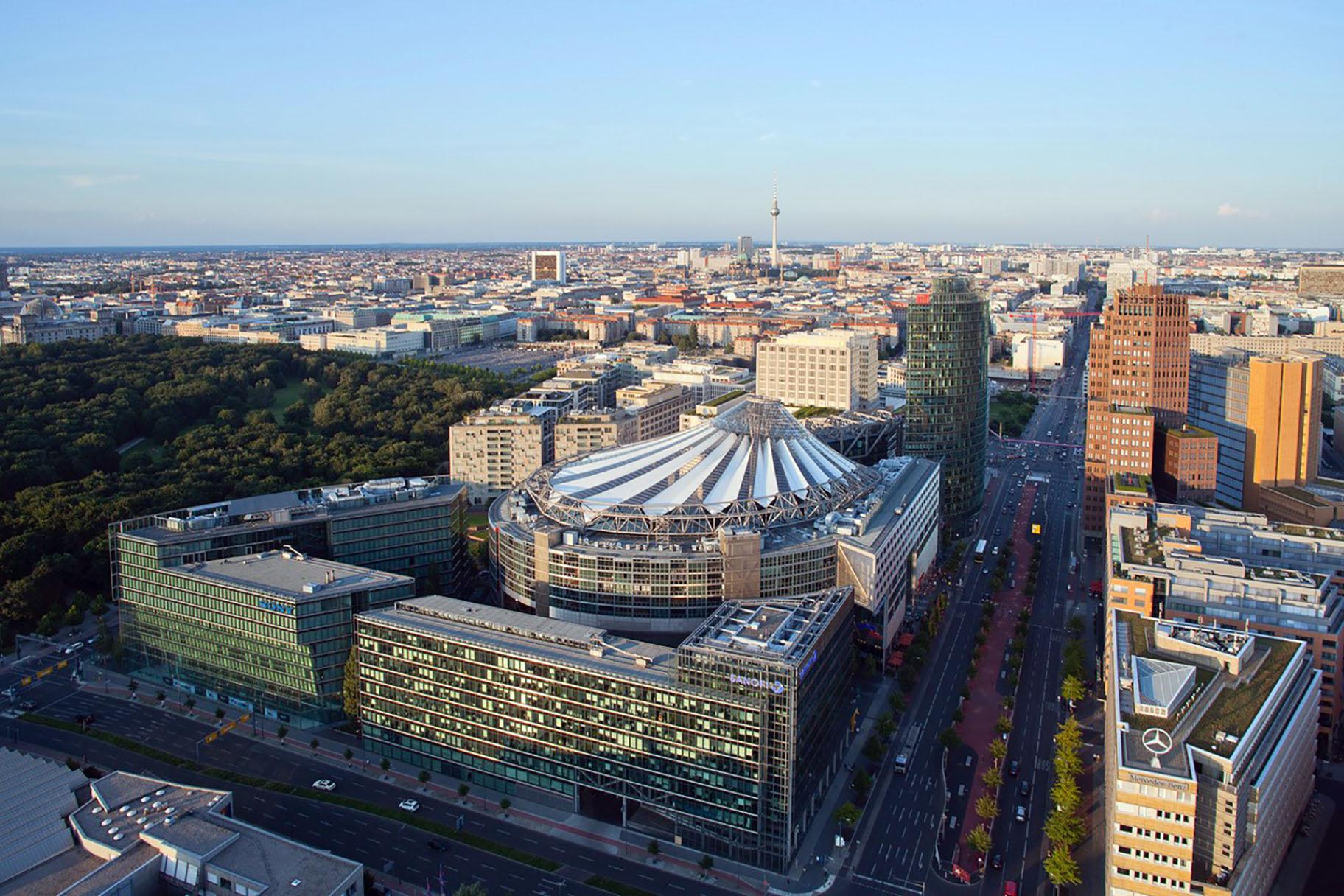 The SONY Center in Berlin, might remind viewers of the Thompson Center with its soaring atrium and spaceship-like exterior. (Courtesy Rainer Viertlboeck)

And of course, the Thompson Center always remained one of his favorites, too.

The building has been back in the news after the cash-strapped State of Illinois finally announced earlier this month they intend to sell the property.

Since it opened, many have been critical of its shape and colors, which contrast sharply with the surrounding buildings. And state workers have complained about heating and cooling malfunctions, as well as noise from the huge atrium.

But the Thompson Center’s defenders say most of those problems could have been avoided if the state had used better construction materials and kept up with maintenance instead of neglecting it for years.

Jahn responded to some of that criticism in a “Chicago Tonight” interview from 2003.

The proposed sale has ignited a fierce preservation battle. Preservation groups argue the building is a monumental achievement, creating a much-needed vast, enclosed public space for all to enjoy.

Video: A Chicago Tonight feature from 1985 on the opening of the Thompson Center, then the State of Illinois Building

Did you know that you can dig through our Ask Geoffrey archives? Revisit your favorite episodes, discover new secrets about the city’s past, and ask Geoffrey your own questions for possible exploration in upcoming episodes. Find it all right here.

Do you have a question for Geoffrey? Ask him.

The number of international homebuyers declined sharply throughout the United States in the past year amidst the global COVID-19 pandemic, according … END_OF_DOCUMENT_TOKEN_TO_BE_REPLACED

Tom Rodeno, 50, a 20-year veteran in representing industrial spaces for Colliers International, based out of the Rosemont office with the title of … END_OF_DOCUMENT_TOKEN_TO_BE_REPLACED

Chicago’s city officials move the deadline for submitting a proposal for the planned casino to October 29, looking for more bidders. Chicago … END_OF_DOCUMENT_TOKEN_TO_BE_REPLACED

A community in western Illinois has officially disbanded its police department over budget concerns. East Galesburg has been without its police … END_OF_DOCUMENT_TOKEN_TO_BE_REPLACED

The officer who died was the first Chicago cop shot and killed in the line of duty this year, Brown said. It's the first line-of-duty shooting … END_OF_DOCUMENT_TOKEN_TO_BE_REPLACED