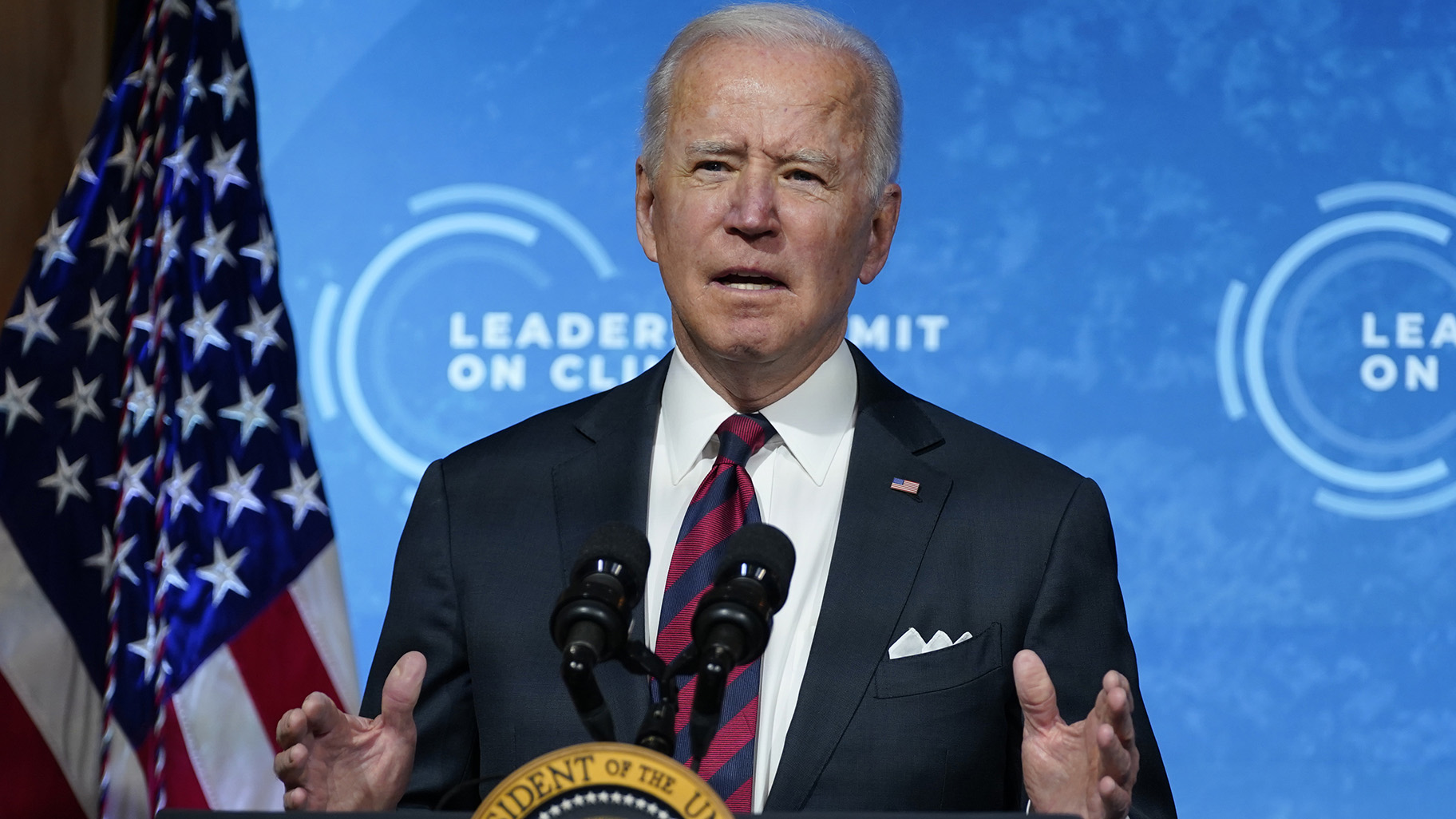 
WASHINGTON (AP) — President Joe Biden convened leaders of the world’s most powerful countries on Thursday to try to spur global efforts against climate change, drawing commitments from Chinese President Xi Jinping and Russian President Vladimir Putin to cooperate on cutting emissions despite their own sharp rivalries with the United States.

“Meeting this moment is about more than preserving our planet,” Biden declared, speaking from a TV-style set for a virtual summit of 40 world leaders. “It’s about providing a better future for all of us,” he said, calling it “a moment of peril but a moment of opportunity.”

“The signs are unmistakable. the science is undeniable. the cost of inaction keeps mounting,” he added.

Biden’s own new commitment, timed to the summit, is to cut U.S. fossil fuel emissions up to 52% by 2030. marking a return by the U.S. to global climate efforts after four years of withdrawal under President Donald Trump. Biden’s administration is sketching out a vision of a prosperous, clean-energy United States where factories churn out cutting-edge batteries for export, line workers re-lay an efficient national electrical grid and crews cap abandoned oil and gas rigs and coal mines.

Japan announced its own new 46% emissions reduction target Thursday, and South Korea said it would stop public financing of new coal-fired power plants, as the U.S. and its allies sought to build momentum via the summit.

The coronavirus pandemic compelled the summit to play out as a climate telethon-style livestream, limiting opportunities for spontaneous interaction and negotiation. The opening was rife with small technological glitches, including echoes, random beeps and off-screen voices.

But the U.S. summit also marshaled an impressive display of the world’s most powerful leaders speaking on the single cause of climate change.

China’s Xi, whose country is the world’s biggest emissions culprit, followed by the United States, spoke first among the other global figures. He made no reference to nonclimate disputes that had made it uncertain until Wednesday that he would even take part in the U.S. summit, and said China would work with America in cutting emissions.

Putin, whose government has been publicly irate over Biden’s characterization of him as a “killer” for Russia’s aggressive moves against its opponents, made no mention of his feuding with Biden in his own climate remarks, a live presentation that also saw moments of dead air among production problems.

“Russia is genuinely interested in galvanizing international cooperation so as to look further for effective solutions to climate change as well as to all other vital challenges,” Putin said. Russia by some measures is the world’s fourth-biggest emitter of climate-damaging fossil fuel fumes.

However, Russia and China announced no specific new emissions cuts themselves.

The pandemic made gathering world leaders for the climate summit too risky. That didn’t keep the White House from sparing no effort on production quality. The president’s staff built a small set in the East Room that looked like it was ripped from a daytime talk show.

The format meant a cavalcade of short speeches by world leaders, some scripted, some apparently more impromptu. “This is not bunny-hugging,” British Prime Minister Boris Johnson said of the climate efforts. “This is about growth and jobs.”

The Biden administration’s pledge would require by far the most ambitious U.S. climate effort ever, nearly doubling the reductions that the Obama administration had committed to in the landmark 2015 Paris climate accord. German Chancellor Angela Merkel was one of many allies welcoming the U.S. back into the accord after Trump pulled out, boosted oil and gas production and mocked the science underlying climate warnings.

“I’m delighted to see that the United States is back, is back to work together with us in climate politics,” Merkel declared in her virtual appearance. “Because there can be no doubt about the world needing your contribution if we really want to fulfill our ambitious goals.”

The new urgency comes as scientists say that climate change caused by coal plants, car engines and other fossil fuel use is worsening droughts, floods, hurricanes, wildfires and other disasters and that humans are running out of time to stave off catastrophic extremes of global warming.

“We are the least contributors to greenhouse gas emissions, but the most affected by climate change,” said Gaston Alfonso Browne, prime minister of Antigua and Barbuda. He called for debt relief and more international assistance to recover from storms and the pandemic to prevent a flow of climate refugees.

His people he said, are “ teetering on the edge of despair.”

After the stream of solemn pledges on fighting climate change, the talk turned to money. Developing countries were watching for firm financial moves from the United States, which they say still owes $2 billion in aid for transitioning away from fossil fuels that President Barack Obama promised but Trump didn’t pay.

Biden delivered new pledges, saying the U.S. would double climate funding help for less wealthy countries by 2024. That cost would be more than made up for when “disasters and conflicts are avoided,” he said. The U.S. International Development Finance Corporation would make a third of all its new investments climate-focused within two years, he said.

Other speakers urged hefty taxes on climate-damaging polluters and a slashing of government programs that amount to subsidies for oil, gas and coal.

Longtime climate policy experts, no strangers to climate summits with solemn pledges, watched some speeches with skepticism. After Brazil’s President Jair Bolsonaro promised an end to clearcutting in the Amazon, Dan Wilkinson of Human Rights Watch’s environmental programs noted, “It is going to be hard for anyone to take it seriously until they actually start taking steps.”

“Any number of them could be done right away,” Wilkinson said.

U.S. officials, in previewing the new administration target, disclosed aspirations and vignettes rather than specific plans, budget lines or legislative proposals for getting there.

As of 2019, before the pandemic, the U.S. had reduced 13% of its greenhouse gases compared with 2005 levels, which is about halfway to the Obama administration goals of 26% to 28%, said climate scientist Niklas Hohne of Climate Action Tracker. That’s owing largely to market forces that have made solar and wind, and natural gas, much cheaper

Biden, a Democrat, campaigned partly on a pledge to confront climate change. He has sketched out some elements of his $2 trillion approach for transforming U.S. transportation systems and electrical grids in his campaign climate plan and in his infrastructure proposals for Congress.

His administration insists the transformation will mean millions of well-paying jobs. Republicans say the effort will throw oil, gas and coal workers off the job. They call his infrastructure proposal too costly.

The number of international homebuyers declined sharply throughout the United States in the past year amidst the global COVID-19 pandemic, according … END_OF_DOCUMENT_TOKEN_TO_BE_REPLACED

Tom Rodeno, 50, a 20-year veteran in representing industrial spaces for Colliers International, based out of the Rosemont office with the title of … END_OF_DOCUMENT_TOKEN_TO_BE_REPLACED

Chicago’s city officials move the deadline for submitting a proposal for the planned casino to October 29, looking for more bidders. Chicago … END_OF_DOCUMENT_TOKEN_TO_BE_REPLACED

A community in western Illinois has officially disbanded its police department over budget concerns. East Galesburg has been without its police … END_OF_DOCUMENT_TOKEN_TO_BE_REPLACED

The officer who died was the first Chicago cop shot and killed in the line of duty this year, Brown said. It's the first line-of-duty shooting … END_OF_DOCUMENT_TOKEN_TO_BE_REPLACED