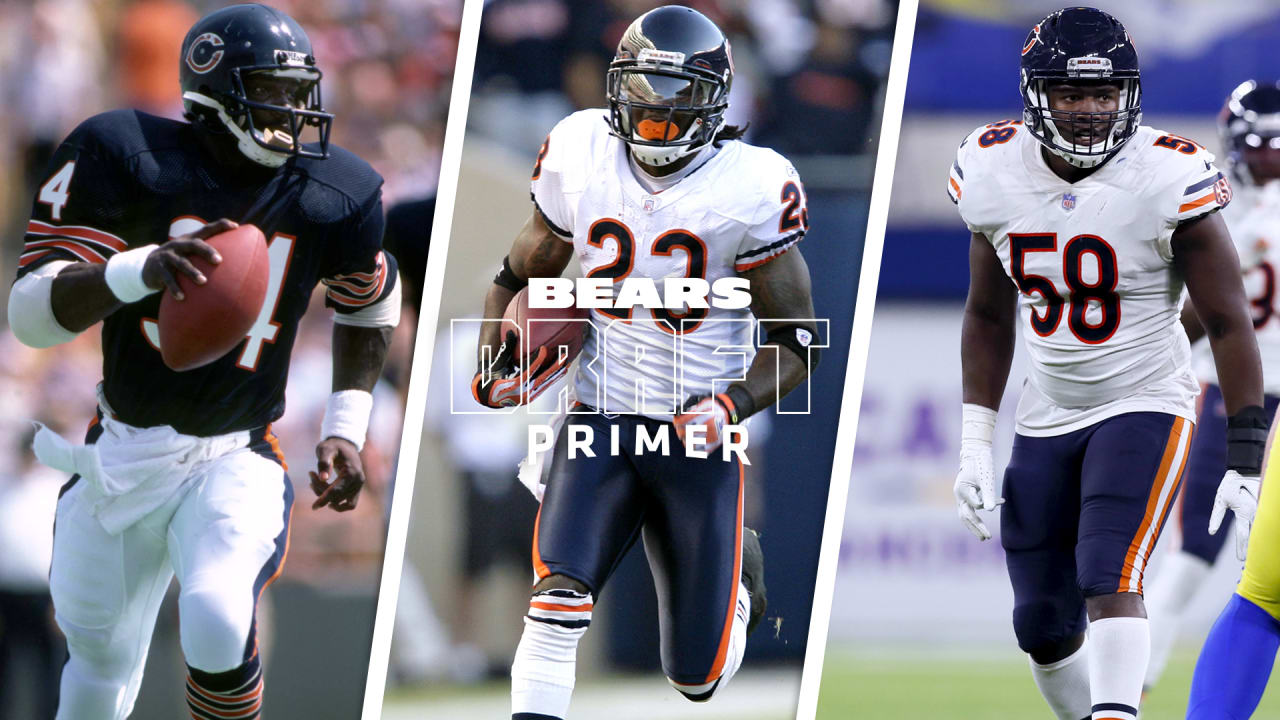 How it played out: With the first pick, the Giants considered Butkus before choosing Auburn’s Tucker Frederickson “because he is the best all-around fullback in the country,” Giants vice president Wellington Mara said at the time.

After the 49ers selected North Carolina running back Ken Williard, the Bears chose Butkus third with a pick they had acquired in a trade with the Steelers and Sayers fourth with their own selection.

After the Cowboys drafted California quarterback Craig Morton fifth overall, the Bears chose DeLong at No. 6 with a pick they had acquired from Washington.

Butkus and Sayers became Hall of Famers who remain among the best players at their respective positions in NFL history. DeLong signed with the Chargers in the rival AFL and later played his final pro season with the Bears in 1972.

Running back Walter Payton after being selected by the Bears fourth overall in the 1975 draft:

“When I get through with Chicago, they’ll be loving me.”

How it played out: Payton was clairvoyant; he quickly became a fan favorite and remains arguably the most beloved player in Bears history in 2021—34 years following his retirement in 1987 and 22 years after he passed away due to bile duct cancer in 1999 at the age of 45.

Sweetness spent his entire 13-year NFL career with the Bears. He was voted to nine Pro Bowls, set the NFL rushing record with 16,726 yards and was inducted into the Hall of Fame in 1993 in his first year of eligibility.

“We certainly did one thing. We helped our needs. I’m so enthused with the whole thing. I think it’s the finest Bear draft in 10 years.”

Linebacker Otis Wilson after being chosen with the 19th pick in the 1980 draft:

“I idolize Dick Butkus. He intimidated the opponent. That’s my style. I move sideline to sideline and destroy everything that moves with the ball. Blockers? I don’t know. I’ve never been blocked.”

How it played out: The brash and ultra-confident Wilson put his money where his mouth was, emerging as a destructive outside linebacker who delivered devastating hits on receivers over the middle and quarterbacks on well-timed blitzes.

Wilson played the first nine seasons of his NFL career with the Bears, registering 36.0 sacks and 10 interceptions, two of which he returned for touchdowns. He was voted to the Pro Bowl in 1985 when he registered a career-high 10.5 sacks and helped the Bears win their first Super Bowl championship.

“The North Pole would warm over and melt before a rookie is going to come in and run our defense. I’ve been through all the game situations. I feel secure.”

How it played out: It didn’t take long before Santa Claus was sporting a nice tan; Singletary assumed the starting job midway through his rookie season and didn’t relinquish it until he had completed his Hall of Fame career in Chicago more than a decade later.

The Baylor product was voted to a Bears-record 10 Pro Bowls, was selected NFL Defensive Player of the Year in 1985 and ’88 and was named to the league’s All-Decade Team for the 1980s. An integral part of a dominant defense, Singletary helped lead the Bears to six NFC Central titles and the franchise’s first Super Bowl championship. He was inducted into the Hall of Fame in 1998.

Coach Mike Ditka after the Bears selected left tackle Jimbo Covert with the sixth pick in the 1983 draft out of Pittsburgh:

“He’s good at setting up short and stopping ends from the left side. In films, he looks like he was toying with people.”

How it played out: A Day 1 starter, Covert played his entire NFL career with the Bears from 1983-90, anchoring some of the top offensive lines in league history. A two-time first-team All-Pro, Covert helped the Bears win six division championships, one conference title and one Super Bowl. He was part of an offensive line that helped the Bears lead the NFL in rushing for four consecutive seasons from 1983-86.

Covert will be enshrined in the Hall of Fame later this year.

Hall of Famer Dan Hampton, a starting defensive tackle alongside Steve McMichael at the time, was bewildered when the Bears addressed the position in the first round of the 1985 draft when they selected William “Refrigerator” Perry at No. 22:

“I was dumbfounded. What are we going to do with him? They must be thinking of a trade.”

How it played out: Coach Mike Ditka loved Perry; defensive coordinator Buddy Ryan initially did not. So while Perry played little on defense early in his rookie season, he became a national overnight sensation when Ditka employed him as the world’s largest fullback. In a Monday night win over the rival Packers, Perry rushed for one touchdown and cleared a wide path for Payton on two other short scoring runs.

Ryan eventually warmed to the idea of playing Perry on defense, so Hampton moved to defensive end and the Fridge eventually started nine games as a rookie for the 1985 Super Bowl champions. Perry remained a full-time Bears starter on defense through the 1992 season.

Middle linebacker Brian Urlacher, after being chosen by the Bears with the ninth pick in the 2000 draft out of New Mexico:

“All you ever hear about is Singletary and Butkus and how good they were. It’s a dream come true. Hopefully I can carry on the tradition.”

How it played out: Urlacher continued the Hall of Fame legacy at the position while playing his entire 13-year NFL career with the Bears. Fueled by a rare combination of size, speed and toughness, he was voted to eight Pro Bowls, was named NFL Rookie of the Year in 2000 and was selected NFL Defensive Player of the Year in 2005.

Urlacher was a four-time All-Pro who helped the Bears win four division titles and reach the Super Bowl in 2006. He started 180 of 182 games played, recording 1,779 tackles, 41.5 sacks, 22 interceptions, 16 fumble recoveries and 11 forced fumbles. The only players who’ve started more games for the Bears are Payton (184) and center Olin Kreutz (183).

Urlacher was enshrined in the Hall of Fame in 2018.

Bears college scouting director Greg Gabriel after the team picked Devin Hester in the second round of the 2006 draft out of Miami (57th overall):

“He is going to scare other teams. He’s great with the ball in his hands. He’s very, very dangerous, real fast.”

How it played out: Spending his first nine NFL seasons with the Bears, Hester emerged as the most prolific return specialist in league history. He became the NFL’s all-time leader with 18 kick return touchdowns and 13 punt return TDs, was voted to three Pro Bowls, won 13 special teams player of the week awards and was named to the NFL’s All-Decade team for the 2000s.

Hester is eligible for the Hall of Fame this year for the first time.

Bears general manager Jerry Angelo after choosing running back Matt Forte in the second round of the 2008 draft out of Tulane (44th overall):

“What he gives us is a big back, a three-down back. He has enough speed to get to the outside. And he has the ability to make people miss at the second level. And those were two areas where we never really could find any consistency [in 2007], which made us an easy team to defend.”

How it played out: During Forte’s eight seasons with the Bears, he led all NFL players with 12,718 yards from scrimmage while becoming the second fastest player in league history to compile 8,000 yards rushing and 4,000 yards receiving behind only Hall of Famer Marshall Faulk.

Safety ﻿Eddie Jackson﻿, after the Bears traded up to pick him in the fourth round of the 2017 draft out of Alabama (112th overall), on his knack for getting into the end zone:

Jackson added a sixth defensive TD last year on an 8-yard fumble return against the Rams, tying Lance Briggs for the third most in Bears history behind Charles Tillman (9) and Mike Brown (7).

Bears general manager Ryan Pace after selecting linebacker ﻿Roquan Smith﻿ with the eighth pick in the first round of the 2018 draft out of Georgia:

“The first thing that comes to mind is his instincts, his play speed and his physicality. I mean, he hits with impact. Those are things that jump out. Every game you watch, he’s just so explosive. This guy’s flying around, making plays.”

Last season Smith was named second-team All-Pro after finishing the season as the only NFL player to record at least 100 tackles, 10 tackles-for-loss, two sacks and two interceptions. His career-high 18 tackles-for-loss tied for the second most in the NFL.

Receiver ﻿Darnell Mooney﻿, after being chosen by the Bears in the fifth round of the 2020 draft out of Tulane (173rd overall), on continuing to embrace the underdog role:

“Same thing over and over; I’ve just got to prove myself. I’ve been living through heart all my life, so I don’t expect it to change. Just know as soon as I get in, I’m going to make a lot of noise and there are going to be some things to talk about in the future.”

How it played out: Even with no offseason workouts or preseason games due to COVID-19, Mooney still emerged as a consistent playmaker as a rookie. One of the most pleasant surprises for the Bears in 2020, he set a franchise record for most receptions by a rookie wide receiver with 61 while amassing 631 yards and scoring four touchdowns.

Mooney’s 61 catches were the second most by a Bears rookie regardless of position behind Forte’s 63 in 2008 and tied for the fourth most ever by an NFL rookie drafted in the fifth round or later.

The number of international homebuyers declined sharply throughout the United States in the past year amidst the global COVID-19 pandemic, according … END_OF_DOCUMENT_TOKEN_TO_BE_REPLACED

Tom Rodeno, 50, a 20-year veteran in representing industrial spaces for Colliers International, based out of the Rosemont office with the title of … END_OF_DOCUMENT_TOKEN_TO_BE_REPLACED

A community in western Illinois has officially disbanded its police department over budget concerns. East Galesburg has been without its police … END_OF_DOCUMENT_TOKEN_TO_BE_REPLACED

The officer who died was the first Chicago cop shot and killed in the line of duty this year, Brown said. It's the first line-of-duty shooting … END_OF_DOCUMENT_TOKEN_TO_BE_REPLACED