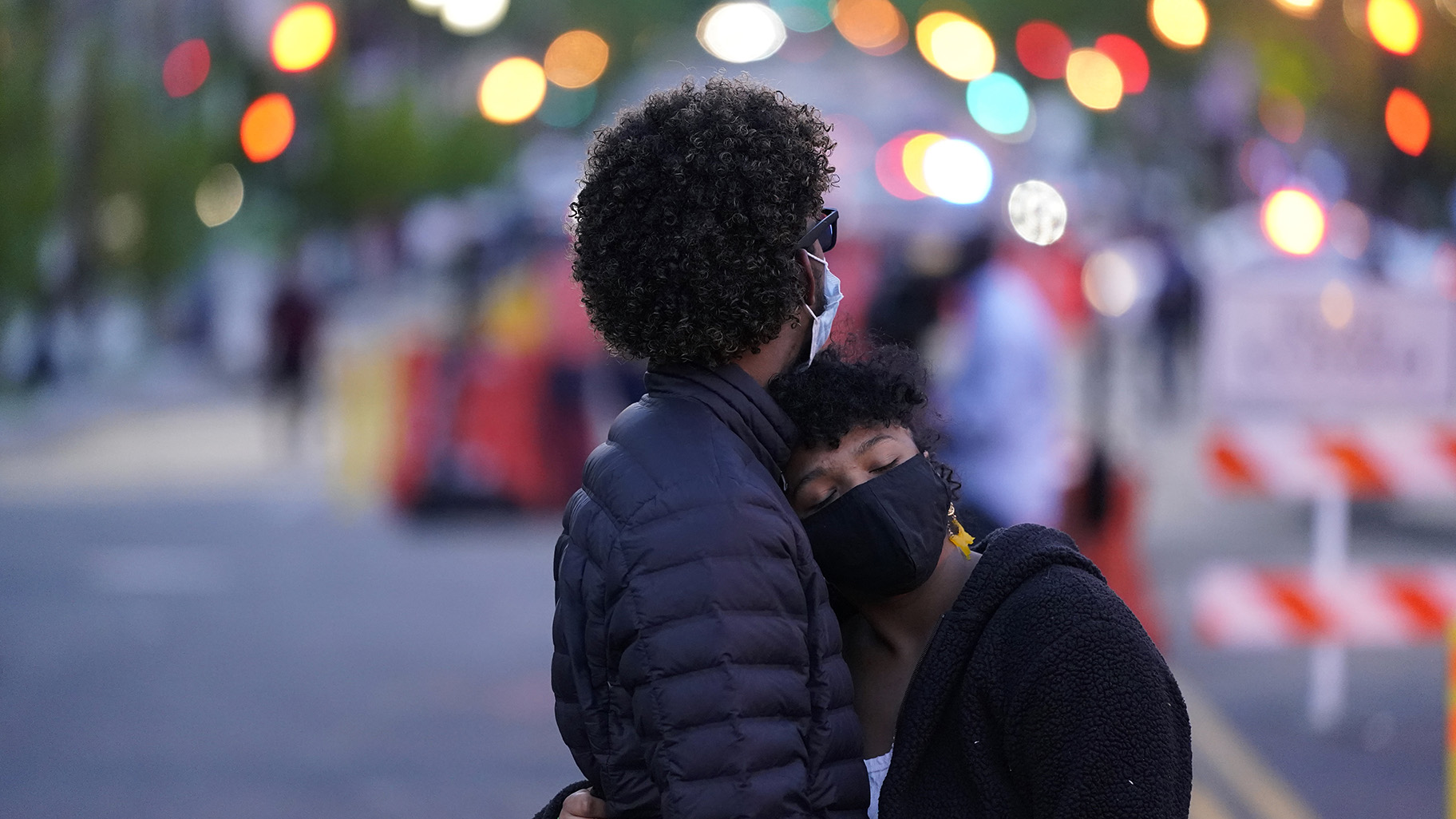 A couple dances at Black Lives Matter Plaza near the White House on Tuesday, April 20, 2021, in Washington, after the verdict in Minneapolis, in the murder trial against former Minneapolis police officer Derek Chauvin was announced. (AP Photo / Alex Brandon)


NEW YORK (AP) — When the verdicts came in — guilty, guilty and guilty — Lucia Edmonds let out the breath she hadn’t even realized she’d been holding.

The relief that the 91-year-old Black woman felt flooding over her when white former Minneapolis police Officer Derek Chauvin was convicted for killing George Floyd was hard-earned, coming after a lifetime of seeing other cases end differently.

“I was prepared for the fact that it might not be a guilty verdict because it’s happened so many times before,” the Washington, D.C., resident said. She recalled the shock of the Rodney King case nearly three decades ago when four Los Angeles officers were acquitted of beating King, a Black motorist.

“I don’t know how they watched the video of Rodney King being beaten and not hold those officers to account,” Edmonds said. About the Chauvin verdict, she said, “I hope this means there is a shift in this county, but it’s too early for me to make that assumption.” Still, she added: “Something feels different.”

The same sense of relief, of accountability served and crisis at least temporarily averted, was palpable across the United States on Tuesday after a jury found Chauvin guilty of murder and manslaughter in killing Floyd, a Black man who took his last breath pinned to the street with the officer’s knee on his neck.

But when it came to what’s next for America, the reaction was more hesitant. Some were hopeful, pointing to the protests and sustained outcry over Floyd’s death as signs of change to come, in policing and otherwise.

Others were more circumspect, wondering if one hopeful result really meant the start of something better in a country with a history of racial injustice, especially in the treatment of Black people at the hands of law enforcement.

With all the relief and gratitude 68-year-old Kemp Harris, a retired kindergarten teacher in Cambridge, Mass., felt upon hearing the verdict, it was tempered by what he’d seen in the much more recent past: The deaths of Daunte Wright in Minnesota and of Adam Toledo in Chicago.

“You know, I think it puts a period on the end of this particular incident,” Harris, who is Black, said when asked if the Chauvin decision represented the end of a chapter. “But I don’t think it puts a stoppage on what’s been going on.”

In Columbus, Ohio, some residents had their celebrations cut short by reports that police fatally shot a teenage Black girl.

“As you’re getting one phone call that he was guilty, I’m getting the next phone call that this is happening in my neighborhood,” Kimberly Shepherd said. Hours later, police released body-camera footage that appeared to show the officer firing just as the girl lunged at another female with a knife.

Beverly Mills, 71, of Pennington, New Jersey, and Elaine Buck, 67, of Hopewell Borough, New Jersey, found themselves thinking back through history as they reflected on the verdict in Minnesota.

“I was bracing myself for what would happen if he did get off,” Mills said. “I couldn’t even wrap my mind around it because I thought, then there is no hope.” Mills said she was on her senior class trip to Washington, D.C., one of just four Black girls out of a class of 200 or so, when the Rev. Martin Luther King Jr. was assassinated in 1968.

“Washington and all the major cities were starting to erupt and they wanted to get the kids back to New Jersey. As the train was leaving, you could see the smoke starting to circle in the sky,” Mills said.

Will the verdict change anything? Buck said: “It will make everybody aware that we’re watching you. We’re videotaping. What else are we supposed to do?”

Things are and will be different, insisted Aseem Tiwari, an Indian American screenwriter who lives in Los Angeles. He’s convinced the level of outrage spurred by Floyd’s death would last, even if it doesn’t take the form of sustained, nationwide protests as it did in 2020.

He used himself as a case in point. Floyd’s death drove him to be more involved and more willing to speak out than ever before — even during a pandemic when gathering carried a risk.

Before one protest, he recalled, his mother “asked me one simple question: ‘Are you willing to get COVID and die while protesting for this?’ And I didn’t flinch for a second.”

That kind of determination, he said, isn’t just going to fade.

There’s still a hard road ahead, said Jonathan Har-Even, of Glen Ridge, New Jersey, and the verdict, while important, doesn’t necessarily feel like a victory.

“It feels like a step in the right direction,” said Har-Even, who is white. “It feels positive, but it’s hard to feel victorious.”

Naim Rasheed, 26, of Oklahoma City, said he had assumed no one would face justice for Floyd’s death. The guilty verdict, he said, was a relief, and he believes police officers will realize they can’t get away with violence against Black Americans.

Tina Ikpa, a Black attorney in Norman, Oklahoma, said she was “waiting for the other shoe to drop.”

If nothing else, the verdict gave the country a glimpse of something it hasn’t always seen, said Harris, the retired teacher in Cambridge, Mass.

“I at least think that we saw what justice can look like in this country,” he said. “We saw what can happen when people just deal with the truth of the matter.”

The number of international homebuyers declined sharply throughout the United States in the past year amidst the global COVID-19 pandemic, according … END_OF_DOCUMENT_TOKEN_TO_BE_REPLACED

Tom Rodeno, 50, a 20-year veteran in representing industrial spaces for Colliers International, based out of the Rosemont office with the title of … END_OF_DOCUMENT_TOKEN_TO_BE_REPLACED

A community in western Illinois has officially disbanded its police department over budget concerns. East Galesburg has been without its police … END_OF_DOCUMENT_TOKEN_TO_BE_REPLACED

The officer who died was the first Chicago cop shot and killed in the line of duty this year, Brown said. It's the first line-of-duty shooting … END_OF_DOCUMENT_TOKEN_TO_BE_REPLACED