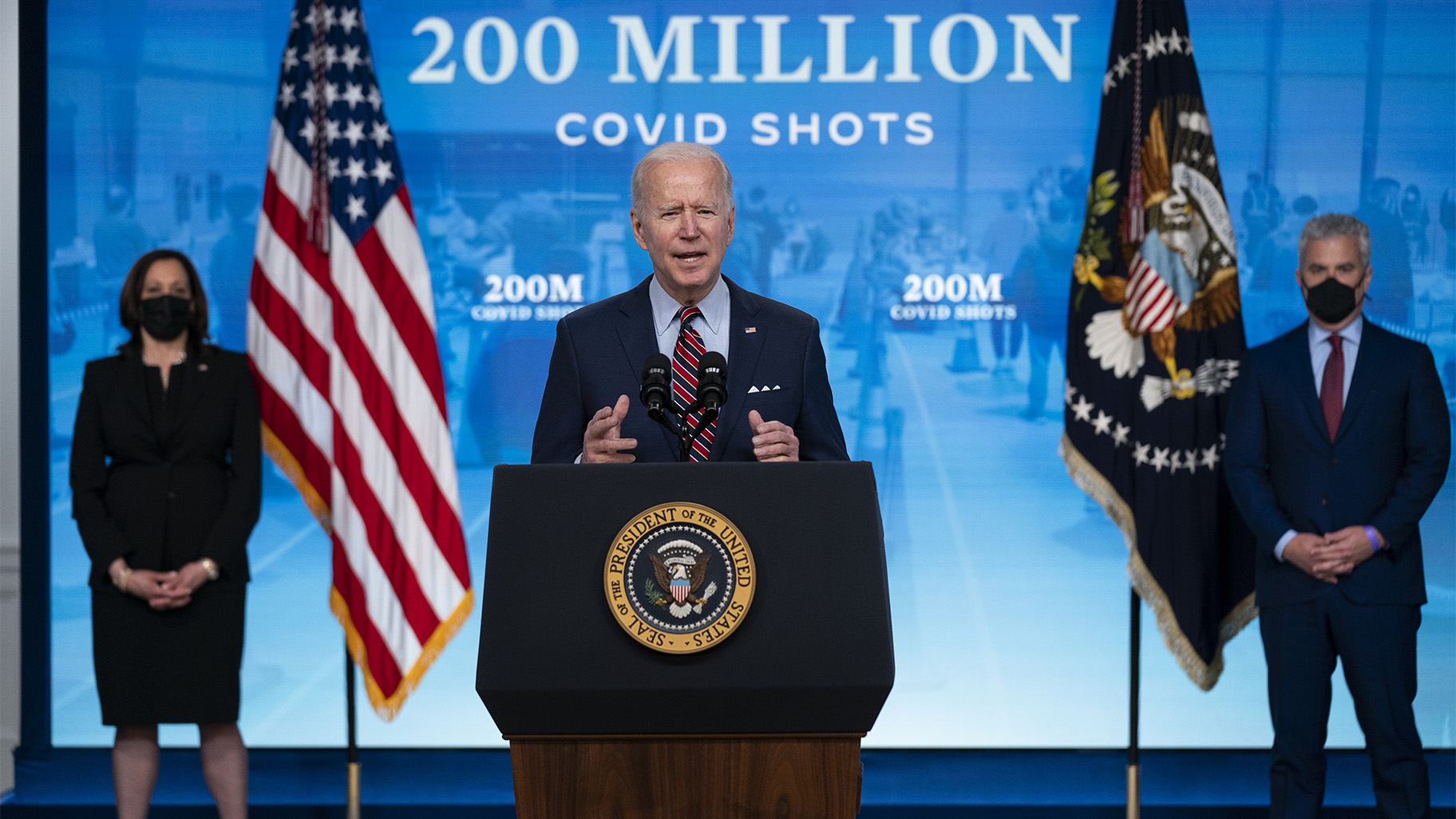 
WASHINGTON (AP) — President Joe Biden on Wednesday announced new employer tax credits and other steps to encourage people reluctant to be inoculated to get the COVID-19 vaccine as his administration tries to overcome diminishing demand for the shots. The moves came as Biden celebrated reaching his latest goal of administering 200 million coronavirus doses in his first 100 days in office.

With more than 50% of adults at least partially vaccinated and roughly 28 million vaccine doses being delivered each week, demand has eclipsed supply as the constraining factor to vaccinations in much of the country.

In a White House speech on Wednesday, Biden acknowledged entering a “new phase” in the federal vaccination effort that relies on increased outreach to Americans to get their shots, both to protect them and their communities.

“Vaccines can save your own life, but they can also save your grandmother’s life, your co-worker’s life, the grocery store clerk or the delivery person helping you and your neighbors get through the crisis,” Biden said. “That’s why you should get vaccinated.”

Over the past week, the pace of inoculation in the U.S. has slowed slightly. That is partly a reflection of disruptions from the “pause” in administration of the Johnson & Johnson shot for a safety review, but also of softening interest for vaccines in many places even as eligibility has been opened to all those older than 16.

As the vaccination program progresses, the administration believes it will only get more difficult to sustain the current pace of about 3 million shots per day. Roughly 130 million Americans have yet to receive one dose.

Surveys have shown that vaccine hesitancy has declined since the rollout of the shots, but administration officials believe they have to make getting vaccinated easier and more appealing, particularly for younger Americans who are less at risk from the virus and do not feel the same urgency to get a shot. That means providing incentives and encouragement to get vaccinated, as well as reducing the friction surrounding the vaccination process.

Biden announced a tax credit for small businesses to provide paid leave for those getting vaccinated or potentially needing to take time off to recover from side effects. Paid for through the $1.9 trillion virus relief package passed last month, the tax change would provide a credit of up to $511 per day, per employee for businesses with fewer than 500 workers to ensure that those workers or businesses don’t suffer a penalty by getting vaccinated.

The White House is urging larger employers, which have more resources, to provide the same benefits to their workers, and educate them about the shots and encourage them to get vaccinated.

“We’re calling on every employer, large and small, in every state, give employees the time off they need with pay to get vaccinated,” Biden said.

According to the White House, just 43% of working adults have received at least one shot.

As Biden celebrated the vaccine milestone, there is a different reality in the states.

In Iowa, nearly half of the counties are not accepting new doses of the COVID-19 vaccine from the state’s allotment because demand has fallen off. In Florida, Palm Beach County plans to close mass vaccination clinics at the end of May with thousands of available vaccine slots unclaimed. In rural West Virginia, a vaccine clinic at a casino/race track parking garage is opening shots to out-of-state residents to address lagging demand. The hope is that people from Washington, D.C., make the hour’s drive to get vaccinated. In Arizona, a plan collapsed that would have opened a federally run vaccine site in Tucson; demand is slipping and county officials preferred more targeted, mobile locations.

Asked about the dip in vaccinations, Health and Human Services Secretary Xavier Becerra said “fluctuation is not uncommon” and that “what we want to do is continue to encourage Americans to continue to get vaccinated.”

“The pace of vaccination isn’t linear,” Becerra said, adding that “we are on a pretty good pace.”

Through its partnership with more than 40,000 retail pharmacies, the White House says more than 90% of Americans now live within 5 miles of a vaccination site. The administration is encouraging state and local efforts to bring vaccines directly to people, whether through initiatives reaching the homebound or clinics at large employment sites.

Many states have also begun to open up vaccination sites to walk-in appointments, reducing reliance on often-cumbersome reservation systems.

Maximizing the number of Americans vaccinated in the coming months is critical for the White House, which is aiming to restore a semblance of normalcy around the July Fourth holiday and even more so by the beginning of the next school year.

Administration officials have been careful to avoid predicting when the country will have vaccinated enough people to reach herd immunity — when enough people become immune to a disease to make its spread unlikely. The U.S. is on track to have enough vaccine supply for every adult by the end of May and for every American by July, but administering the shots will be another matter.

With its stockpile secure and demand dropping at home, the president spoke again of sharing excess doses with allies.

Biden said he talked with Canadian Prime Minister Justin Trudeau for about 30 minutes on Wednesday. “We helped a little bit there, we’re going to try to help some more,” Biden said, referring to his decision last month to share about 1.5 million doses of the AstraZeneca vaccine with Canada. “But there’s other countries as well that I’m confident we can help, including in Central America. But it’s in process.”

He added. “We don’t have enough to be confident to send it abroad now. But I expect we’re going to be able to do that.”

Biden set his goal of 200 million shots last month after meeting his 100 million-in-100 days goal just over a month ago. That original benchmark was announced Dec. 8, days before the U.S. had even one authorized vaccine, let alone the three that have now received emergency authorization. Still, it was generally seen within reach, if optimistic.

By the time Biden was inaugurated on Jan. 20, the U.S. had already administered 20 million shots at a rate of about 1 million per day, bringing complaints at the time that Biden’s goal was not ambitious enough. Biden quickly revised it upward to 150 million doses in his first 100 days.

The number of international homebuyers declined sharply throughout the United States in the past year amidst the global COVID-19 pandemic, according … END_OF_DOCUMENT_TOKEN_TO_BE_REPLACED

Tom Rodeno, 50, a 20-year veteran in representing industrial spaces for Colliers International, based out of the Rosemont office with the title of … END_OF_DOCUMENT_TOKEN_TO_BE_REPLACED

A community in western Illinois has officially disbanded its police department over budget concerns. East Galesburg has been without its police … END_OF_DOCUMENT_TOKEN_TO_BE_REPLACED

The officer who died was the first Chicago cop shot and killed in the line of duty this year, Brown said. It's the first line-of-duty shooting … END_OF_DOCUMENT_TOKEN_TO_BE_REPLACED