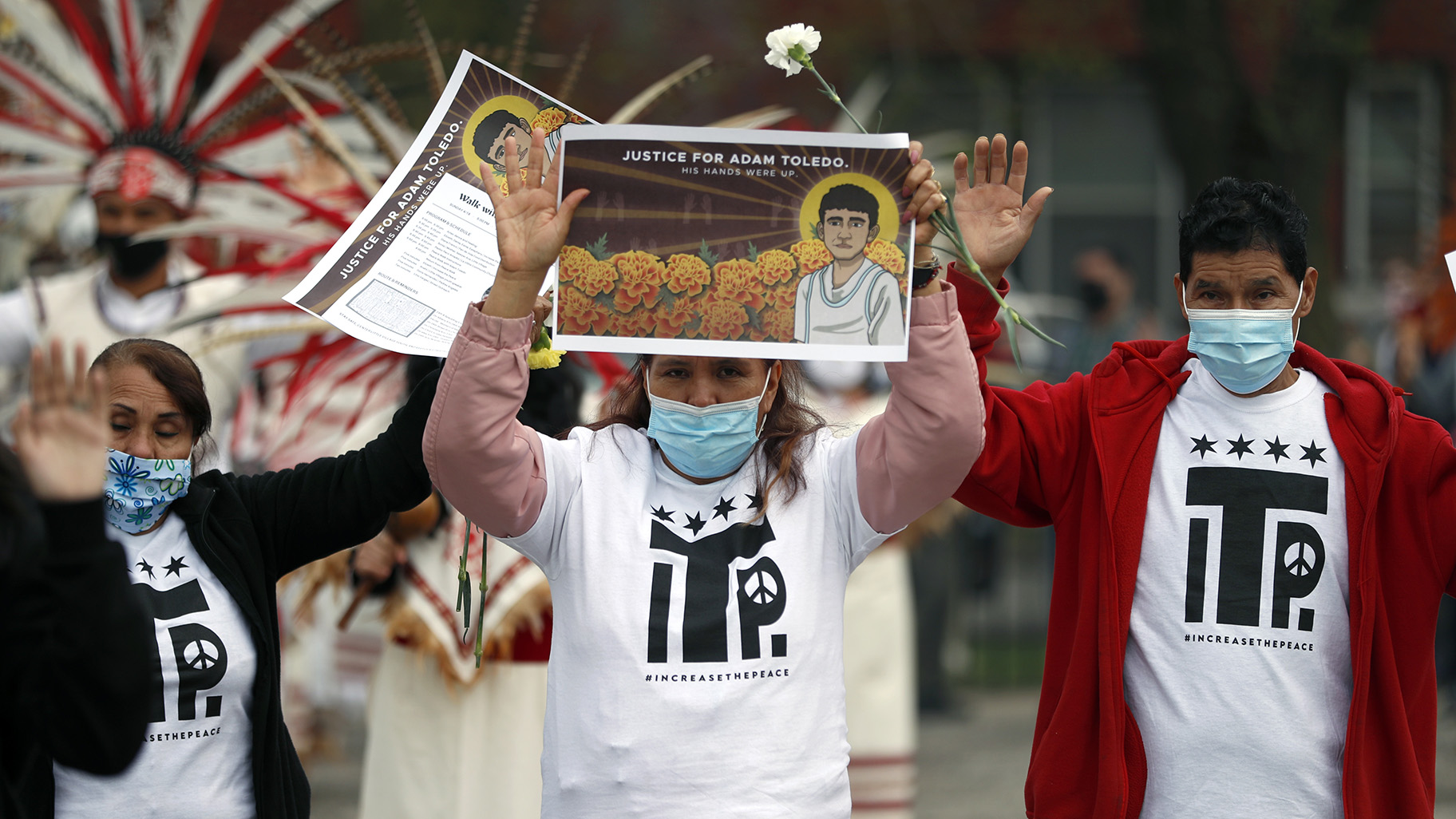 
CHICAGO (AP) — The only way for 13-year-old Adam Toledo to get justice, activists say, is with a federal probe into the Chicago police officer who shot him during a foot chase down a darkened alley.

About a dozen people gathered Tuesday at a legal office in the heart of a Latino neighborhood, near Little Village where the boy was shot last month, to ask the Justice Department to get involved.

“We cannot leave it up to the police department to investigate itself and expect meaningful reforms,” said attorney and activist Arturo Jáuregi. “That has never worked in the past and will not work now.”

Calls like this have grown for federal investigations into recent police killings across the nation since President Joe Biden took office and said he believes racial disparities in policing must change.

The family of a child shot dead by police in 2014 have also recently asked the Justice Department to reopen that case. After motorist Daunte Wright was killed by a Minnesota police officer earlier this month, there were also calls for federal authorities to step in. And if former Minneapolis police officer Derek Chauvin is acquitted in the killing of George Floyd, whose death sparked mass protests around the country, the only chance for further legal action would be from an ongoing federal probe.

The U.S. Justice Department, though working under an administration with very different priorities, is still bound by the same laws that present a high bar for bringing federal charges. And that may leave victims’ families disappointed.

Still, the department is shifting its priorities to focus more on civil rights issues, criminal justice overhauls and policing policies. Attorney General Merrick Garland has declared there isn’t yet equal justice under the law.

On Tuesday, as the Chauvin jury deliberated, Biden said of Floyd’s family: “They’re a good family, and they’re calling for peace and tranquility, no matter what that verdict is. I’m praying the verdict is the right verdict. It’s overwhelming, in my view. I wouldn’t say that unless the jury was sequestered now.”

Three weeks ago in Chicago, 400 miles (600 kilometers) away, Officer Eric Stillman, who is white, was responding to a call of shots fired around 3 a.m. when he chased Adam, who was Latino. Bodycam video released last week shows the boy appearing to drop a handgun and begin raising his hands less than a second before Stillman fires his gun and kills him. The bodycam footage later shows Stillman shining a light on a handgun on the ground near the boy.

The video prompted grief and demonstrations in Chicago, a city with a history of police misconduct and distrust between police and the community, especially Black and Latino residents.

The Justice Department hasn’t said yet whether it will look into any of the recent cases.

To bring federal civil rights charges, federal prosecutors must prove that an officer’s actions willfully broke the law and were not simply the result of a mistake, negligence or bad judgment. It has been a consistently tough burden for federal prosecutors to meet across both Democratic and Republican administrations.

To prove a crime, prosecutors would need to convince a jury that the force used was more than what would be reasonably necessary to arrest or subdue a suspect, meaning convincing jurors that, in the middle of an arrest, the officer made a clear and willful decision to cause someone’s death.

That was a burden of proof that prosecutors said they couldn’t meet in other high-profile cases in recent years, including in the deaths of Eric Garner in New York City, Tamir Rice in Cleveland and Michael Brown in Ferguson, Missouri.

Tamir’s family, citing the administration change in Washington, asked the Justice Department last week to reopen the case into the death of the 12-year-old Black boy, who was playing with a toy gun when he was shot dead. The officers involved weren’t indicted, and the case was closed in the waning weeks of the Trump administration.

“I’m still in so much pain because no one has been held accountable for the criminal act that took his life,” the boy’s mother, Samaria Rice, said in a statement. “I’m asking DOJ to reopen the investigation into my son’s case; we need an indictment and conviction for Tamir’s death.”

Advocates are also pushing for an expansion of another federal option — its use of pattern and practice investigations, sweeping probes of police departments.

But Chicago, where 13-year-old Adam was shot, is already under a consent decree following just such a probe that found a record of racism and abuse by Chicago police going back decades. The city agreed to changes in the agreement approved in 2019 by a federal judge. The investigation was prompted by the 2014 killing of Laquan McDonald, a Black 17-year-old, by a white officer. Jason Van Dyke was later convicted of murder for shooting the teen 16 times, video of which the city fought to suppress.

An independent monitor’s report last month showed that the city has made some progress on putting changes in place, but that significant work remains undone.

As advocates push for the Justice Department to expand its frequency of major probes of police departments, Garland issued a memo this month easing restrictions placed on the use of consent decrees. By doing so, the Justice Department made it easier for its prosecutors to use the tool to force changes at police departments and other government agencies accused of widespread abuse and misconduct.

The Garland memo rescinded a previous version issued by then-Attorney General Jeff Sessions, shortly before he resigned in November 2018, that seriously curtailed use of the decrees and required the signoff of top department officials before they could be implemented.

In Chicago, attorney Jáuregi said the community doesn’t trust the police but believes the Justice Department will see the case through.

“We believe the attorney general, Merrick Garland, that he’s a good man, and we believe that he understands the needs of our community.”

The number of international homebuyers declined sharply throughout the United States in the past year amidst the global COVID-19 pandemic, according … END_OF_DOCUMENT_TOKEN_TO_BE_REPLACED

Tom Rodeno, 50, a 20-year veteran in representing industrial spaces for Colliers International, based out of the Rosemont office with the title of … END_OF_DOCUMENT_TOKEN_TO_BE_REPLACED

A community in western Illinois has officially disbanded its police department over budget concerns. East Galesburg has been without its police … END_OF_DOCUMENT_TOKEN_TO_BE_REPLACED

The officer who died was the first Chicago cop shot and killed in the line of duty this year, Brown said. It's the first line-of-duty shooting … END_OF_DOCUMENT_TOKEN_TO_BE_REPLACED