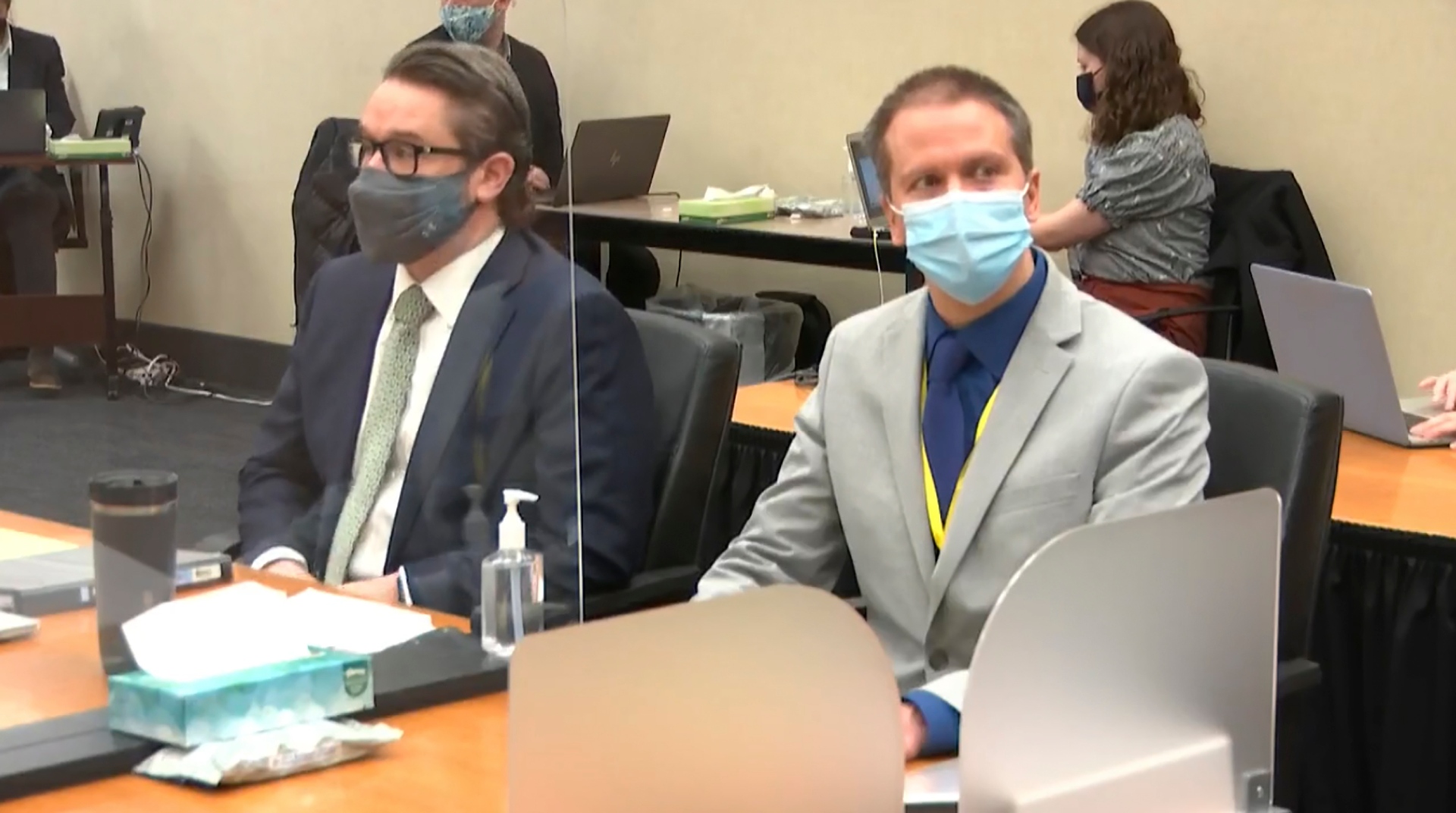 In this image from video, defense attorney Eric Nelson, left, and defendant, former Minneapolis police officer Derek Chauvin listen to Hennepin County Judge Peter Cahill read instructions to the jury before closing arguments, Monday, April 19, 2021, in the trial of Chauvin at the Hennepin County Courthouse in Minneapolis. Chauvin is charged in the May 25, 2020 death of George Floyd. (Court TV via AP, Pool)


MINNEAPOLIS (AP) — Officer Derek Chauvin “had to know” he was squeezing the life out of George Floyd as the Black man cried out over and over that he couldn’t breathe and finally fell silent, a prosecutor told jurors Monday as closing arguments began at Chauvin’s murder trial.

“Use your common sense. Believe your eyes. What you saw, you saw,” Steve Schleicher said, referring to the excruciating bystander video of Floyd pinned to the pavement with Chauvin’s knee on or close to his neck last May for up to 9 minutes, 29 seconds, as bystanders yelled at the white officer to get off.

Chauvin removed his COVID-19 mask in front of the jury for one of the very few times during the trial as his lawyer, Eric Nelson, launched into the defense closing argument, saying that prosecutors had failed to meet their burden of proving their case beyond a reasonable doubt.

Nelson said the standard for judging the officer is not what he should have done or could have done differently, but this: “What were the facts that were known to this officer at the precise moment he used force and, considering all of the totality of circumstances and facts known to the officer … what would a reasonable police officer have done?”

The dueling arguments began with Minneapolis on edge against a repeat of the violence that erupted in the city and around the U.S. last spring over Floyd’s death.

The defense contends the 46-year-old Floyd died of underlying heart disease and his illegal use of fentanyl and methamphetamine.

Replaying portions of the bystander video and other footage as he made his case, Schleicher dismissed some of the defense theories as “nonsense,” saying Chauvin’s pressure on Floyd killed him by constricting his breathing.

He rejected the drug overdose argument, the contention that police were distracted by what they saw as hostile onlookers, the notion that Floyd had “superhuman” strength from a state of agitation known as excited delirium, and the suggestion that Floyd suffered carbon monoxide poisoning from auto exhaust.

The prosecutor sarcastically referred to the idea that it was heart disease that killed Floyd as an “amazing coincidence.”

“Is that common sense or is that nonsense?” Schleicher asked the racially diverse jury.

Schleicher described how Chauvin ignored Floyd’s cries that he couldn’t breathe, and continued to kneel on Floyd after he stopped drawing breath and had no pulse — even after the ambulance arrived.

Floyd was “just a man, lying on the pavement, being pressed upon, desperately crying out. A grown man crying out for his mother. A human being,” Schleicher said. He said Chauvin “heard him, but he just didn’t listen.”

Chauvin was “on top of him for 9 minutes and 29 seconds and he had to know,” Schleicher said. “He had to know.”

The prosecutor said Floyd “was not a threat to anyone.”

Chauvin, wearing a light gray suit with a blue shirt and blue tie, focused on taking notes during the prosecution’s arguments, only occasionally raising his eyes from his notepad. An unidentified woman occupied the single seat set aside in the pandemic-spaced courtroom for a Chauvin supporter.

Floyd’s brother Philonise represented the family in court, as he often has throughout the trial.

He said Floyd, who was arrested on suspicion of passing a counterfeit $20 bill for a pack of cigarettes at a corner market, was terrified of being put into the tiny backseat of the squad car when he struggled with officers. The prosecutor played video of Floyd being pulled out of the car and forced to the ground — noting that he was on his knees and said thank you.

“A reasonable officer should’ve recognized Floyd wasn’t trying to escape. … The problem was the back of the car. Just like George Floyd tried to explain over and over,” the prosecutor said.

He also noted that Chauvin was required to use his training to provide medical care to Floyd but ignored bystanders, rebuffed help from an off-duty paramedic and rejected a suggestion from another officer to roll Floyd onto his side.

Several witnesses, including one for the defense, said Floyd might have lived if CPR had been administered as soon as he lost a pulse.

“Conscious indifference, indifference. Do you want to know what indifference is and sounds like?” Schleicher asked before playing a video of Chauvin replying, “Uh-huh” several times as Floyd cries out.

The prosecution took about an hour and 45 minutes to make its case, with Schleicher ending his argument by saying: “This wasn’t policing. This was murder.”

The anonymous jury will deliberate in a downtown courthouse surrounded by concrete barriers and razor wire, in a city heavily fortified by National Guard members and just days after a new round unrest over the police killing of a 20-year-old Black man in a nearby suburb. Some businesses boarded up their storefronts with plywood.

Chauvin, 45, is charged with second-degree murder, third-degree murder and second-degree manslaughter. All three charges require the jury to conclude that Chauvin’s actions were a “substantial causal factor” in Floyd’s death — and that his use of force was unreasonable.

To convict Chauvin of second-degree murder, prosecutors don’t have to prove Chauvin intended to harm Floyd, only that he deliberately applied force, which resulted in harm.

The number of international homebuyers declined sharply throughout the United States in the past year amidst the global COVID-19 pandemic, according … END_OF_DOCUMENT_TOKEN_TO_BE_REPLACED

Tom Rodeno, 50, a 20-year veteran in representing industrial spaces for Colliers International, based out of the Rosemont office with the title of … END_OF_DOCUMENT_TOKEN_TO_BE_REPLACED

Chicago’s city officials move the deadline for submitting a proposal for the planned casino to October 29, looking for more bidders. Chicago … END_OF_DOCUMENT_TOKEN_TO_BE_REPLACED

A community in western Illinois has officially disbanded its police department over budget concerns. East Galesburg has been without its police … END_OF_DOCUMENT_TOKEN_TO_BE_REPLACED

The officer who died was the first Chicago cop shot and killed in the line of duty this year, Brown said. It's the first line-of-duty shooting … END_OF_DOCUMENT_TOKEN_TO_BE_REPLACED