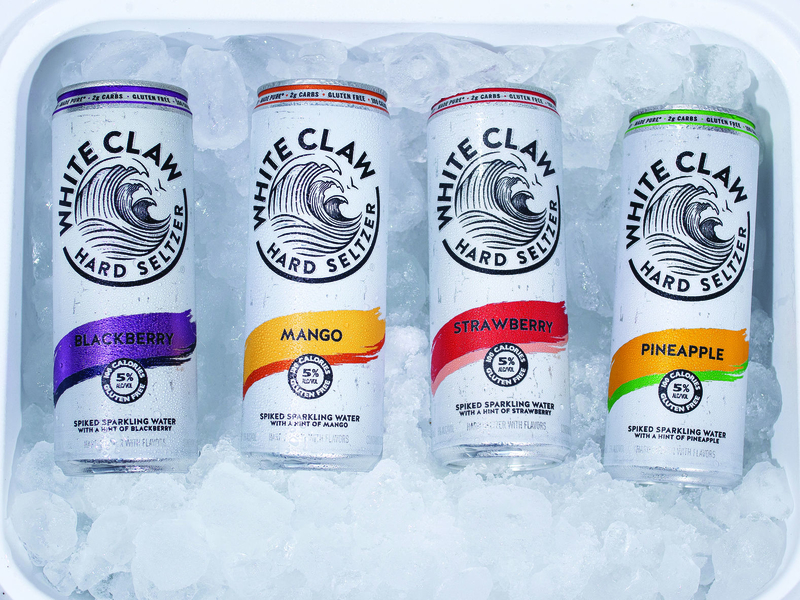 “When you’re the biggest dog in town, every little dog is going to start taking nips out of you,” says beverage industry consultant Bump Williams. “How do you stymie or slow that promiscuous shopper from going out and trying everything that is out there in the marketplace?”

White Claw has launched several new products this year, including 18- and 24-packs, White Claw Iced Tea and White Claw Surge, which has 8 percent alcohol in a single can compared to 5 percent in regular White Claws. Variety packs are also big sellers for the brand, Shea says. It had two on the market and recently launched a third, which features new flavors such as strawberry and pineapple.

White Claw is also looking to a frontier largely untapped by hard seltzers: bars and restaurants.

Shea won’t say how much of the company’s sales are from such venues, but he did say it was a “very low number.” In the past year, hard seltzer sales at eating and drinking establishments were $987 million, down about 34 percent from almost $1.5 billion the year prior, according to Nielsen data. The pandemic stymied hard seltzers’ progression onto bar and restaurant menus, says Danelle Kosmal, vice president of Nielsen’s beverage alcohol practice.

“Now that we’re in the recovery phase and everything’s opening up, there’s so much upside for seltzer in” those types of venues, she says.

Getting into more bars and restaurants requires strong distribution networks. White Claw has those relationships in the retail world, says Jake Bolling, co-founder and CEO of Skupos, a software platform for convenience stores. But so do large competitors like Anheuser-Busch, which makes the No. 3 hard seltzer in the category, Bud Light Seltzer, with about 8.4 percent market share.

Bolling says Bud Light captured some market share from White Claw in convenience stores when it launched its hard seltzer. It evened out, but the example illustrates the power of a strong distribution network. Big beverage companies already have beer on tap and other products in bars and restaurants, and they can more seamlessly get those businesses to carry additional offerings, experts say.

Competition is heating up as hard seltzer’s intense growth starts to cool. Retail sales growth slowed to 70.8 percent last year from 252.9 percent growth the year prior, according to Nielsen. Outsized growth in 2020 was in part an anomaly driven by customers stocking up during lockdowns. But 2021 growth also is down sharply from the 189.6 percent rise over the same time period two years ago, signaling a longer-term slowdown as the industry begins to mature.

Molson Coors, Constellation Brands and Anheuser-Busch—which all have seltzers among the top 10 in the market—aren’t just trying to steal customers from White Claw and Truly, Johnson says. They’re trying to win over beer, wine and liquor drinkers or get customers to reach for their products during certain occasions, like picnics or concerts.

“The reason everyone is entering this category is not because they think it’s going to be a fight-to-the-death blood match,” Johnson says. “It’s because they think there’s a lot of white space there to bring new consumers into the category.”

The number of international homebuyers declined sharply throughout the United States in the past year amidst the global COVID-19 pandemic, according … END_OF_DOCUMENT_TOKEN_TO_BE_REPLACED

Tom Rodeno, 50, a 20-year veteran in representing industrial spaces for Colliers International, based out of the Rosemont office with the title of … END_OF_DOCUMENT_TOKEN_TO_BE_REPLACED

Chicago’s city officials move the deadline for submitting a proposal for the planned casino to October 29, looking for more bidders. Chicago … END_OF_DOCUMENT_TOKEN_TO_BE_REPLACED

A community in western Illinois has officially disbanded its police department over budget concerns. East Galesburg has been without its police … END_OF_DOCUMENT_TOKEN_TO_BE_REPLACED

The officer who died was the first Chicago cop shot and killed in the line of duty this year, Brown said. It's the first line-of-duty shooting … END_OF_DOCUMENT_TOKEN_TO_BE_REPLACED