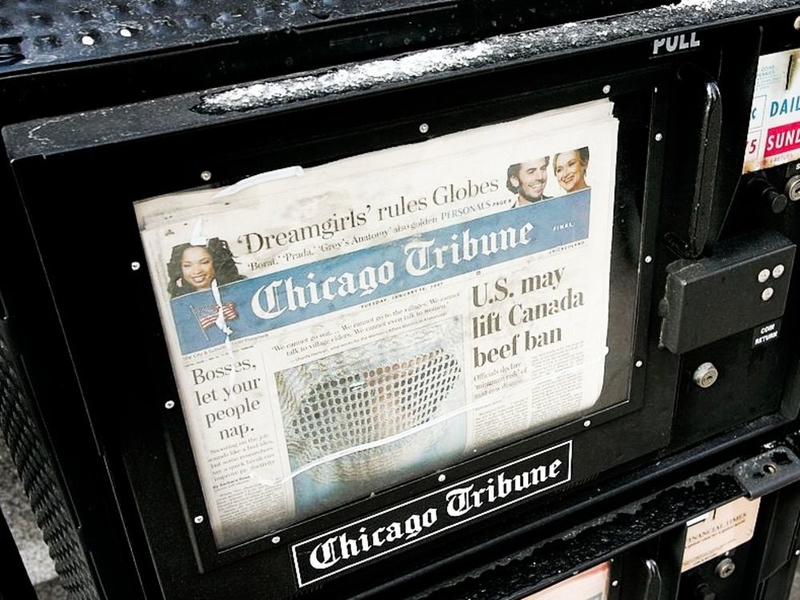 The company’s full-time newsroom employees are eligible for the buyout and must apply by June 9. Employees with less than three years at the company would receive eight weeks of base pay, and those with more will receive 12 weeks of base pay plus one week for every additional year of employment.

The last day of work would be June 18. The company reserves the right to accept or deny applications.

Guilds representing Tribune employees will likely try to negotiate terms for their members.

The cuts were expected. Alden is known for slashing staff count at newsrooms it acquires, and journalists at the Chicago-based company lobbied for local ownership and fought against the deal. Shareholders approved the deal Friday, at $17.25 per share.

News regarding the financing heightened journalists’ concerns about cuts. The Chicago Tribune’s newsroom has already undergone multiple rounds of buyouts and leadership changes since Alden became the largest shareholder in late 2019.

Its most recent round of buyouts was offered in December, and those employees’ last day was Jan. 15. The paper lost veteran reporters who had been there for decades, including Pulitzer Prize-winning architecture critic Blair Kamin, Cubs beat reporter Mark Gonzales and restaurant critic Phil Vettel.

In December, the union representing newsroom employees said 33 of its members had left through buyouts or attrition since September 2019. At the time, about 160 union-represented newsroom staff remained. By last month, that number had dropped to 114.

The number of international homebuyers declined sharply throughout the United States in the past year amidst the global COVID-19 pandemic, according … END_OF_DOCUMENT_TOKEN_TO_BE_REPLACED

Tom Rodeno, 50, a 20-year veteran in representing industrial spaces for Colliers International, based out of the Rosemont office with the title of … END_OF_DOCUMENT_TOKEN_TO_BE_REPLACED

Chicago’s city officials move the deadline for submitting a proposal for the planned casino to October 29, looking for more bidders. Chicago … END_OF_DOCUMENT_TOKEN_TO_BE_REPLACED

A community in western Illinois has officially disbanded its police department over budget concerns. East Galesburg has been without its police … END_OF_DOCUMENT_TOKEN_TO_BE_REPLACED

The officer who died was the first Chicago cop shot and killed in the line of duty this year, Brown said. It's the first line-of-duty shooting … END_OF_DOCUMENT_TOKEN_TO_BE_REPLACED