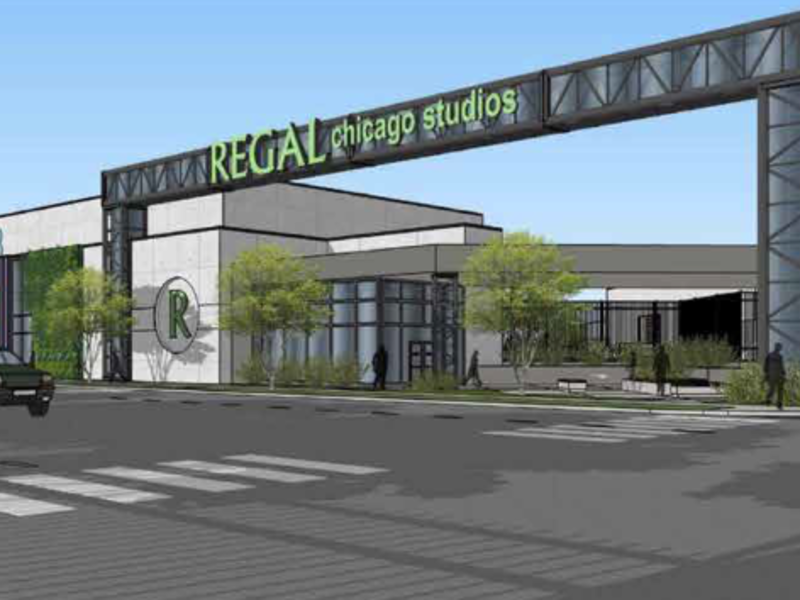 Dudley has assembled a team that includes James Reynolds Jr., chairman and CEO of Loop Capital Markets, a Chicago-based investment firm that will help raise debt and equity for the development. Like Dudley, who lived at 70th Street and East Euclid Avenue, Reynolds grew up in South Shore, near 80th and South Jeffery Boulevard.

“It’s really a homecoming for us, and we are so excited about doing this development in that area,” Reynolds said.

Hundreds of people, possibly more, would work at the studios, though Dudley declined to provide a specific figure. Employment would fluctuate based on what productions rented the studio space. But Dudley offered a hint: “The Chi” employs about 400 people on two Cinespace soundstages, he said. The first phase of the Regal Mile project, covering about 220,000 square feet, would include about six stages, he said.

The project also would diversify the local labor market, bringing new career options to high school graduates in the neighborhood. Dudley aims to work with Chicago Public Schools to set up internships at Regal Mile for 11th- and 12th-grade students.

“It provides exposure to a profession that children might otherwise not be exposed to,” said Ald. Leslie Hairston, 5th, who represents the neighborhood and supports the development.

Equally if not more important, the project has the potential to create a ripple effect, boosting demand for restaurants, stores and other nearby businesses that would cater to the people who work there. South Shore’s commercial strips are suffering from high vacancies and could use a boost.

“They’re in dire need of meaningful investment that will uplift the community,” said Dudley, 50. “It’s been forgotten. It’s not the South Shore community I grew up in.”

He says he’s received plenty of support from the administration of Mayor Lori Lightfoot, which has targeted film and television production as a growth industry for the city. A task force the mayor formed to generate ideas to turn around the Chicago economy singled out the sector in a report it released last July.

“Film and TV production can quickly create a variety of jobs that benefit our communities—a mix of high-paying and low-skill jobs including catering, security, construction and more,” the report said.

The film industry employs about 14,000 people in Illinois, according to the report. Though production dropped off in 2020 because of the COVID-19 pandemic, the industry returned to pre-COVID production levels in the first quarter of this year, adding more than 1,775 jobs in the state, according to the Illinois Film Office.

Cinespace isn’t the only local business expanding to keep up with booming demand for studio space. The owner of a former Marshall Field’s warehouse complex on the Northwest Side is in the process of raising money for a big studio campus there.

Dudley and Reynolds plan to finance their project with private capital—no tax-increment financing or other subsidies from the city. But they need the City Council to approve a zoning change for the studio campus. Dudley aims to begin construction by the end of the year.

Dudley, a producer whose credits include “Meet the Blacks” and “The Last Two Lovers at the End of the World,” has also been a manager and partner of Common, another Chicago native. Dudley started working on his Chicago studio plans a few years ago, when he began spending more time in the city for the production of “The Chi.”

His search for a location led him to South Works, the giant vacant former steel mill site on the south lakefront next to the mouth of the Calumet River. His group “got into a meaningful dialogue with U.S. Steel,” the owner of the property, but never reached a deal. Common was involved on a limited basis in that proposal but is not involved in his South Shore deal, Dudley said.

Dudley sees the potential for Chicago’s film and TV industry from his current home in Atlanta, which some now call “The Hollywood of the South” because the industry has grown so much there. More than 70 productions are underway right now in Atlanta, Dudley said.

“We can build Chicago to that capacity,” he said.

Meanwhile, Dudley is considering making another investment in Chicago. He’s already looking for a home in the city—not downtown, but in South Shore.

“Why would I live somewhere else?”

The number of international homebuyers declined sharply throughout the United States in the past year amidst the global COVID-19 pandemic, according … END_OF_DOCUMENT_TOKEN_TO_BE_REPLACED

Tom Rodeno, 50, a 20-year veteran in representing industrial spaces for Colliers International, based out of the Rosemont office with the title of … END_OF_DOCUMENT_TOKEN_TO_BE_REPLACED

Chicago’s city officials move the deadline for submitting a proposal for the planned casino to October 29, looking for more bidders. Chicago … END_OF_DOCUMENT_TOKEN_TO_BE_REPLACED

A community in western Illinois has officially disbanded its police department over budget concerns. East Galesburg has been without its police … END_OF_DOCUMENT_TOKEN_TO_BE_REPLACED

The officer who died was the first Chicago cop shot and killed in the line of duty this year, Brown said. It's the first line-of-duty shooting … END_OF_DOCUMENT_TOKEN_TO_BE_REPLACED