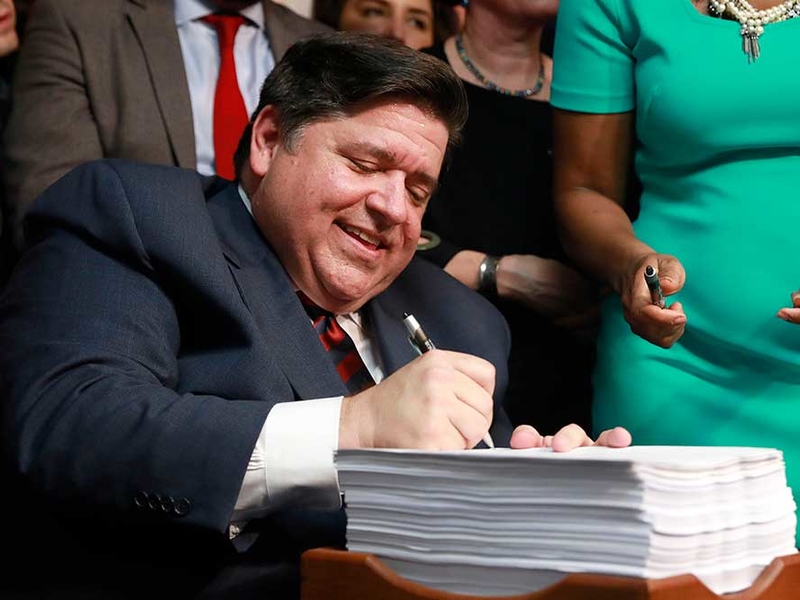 The bill to double the cost of living adjustments, or COLAs, for roughly 2,200 firefighters was sponsored by Rob Martwick in both chambers of the General Assembly—Martwick moved from the House to the Senate in June of 2019. Lightfoot has railed against the legislation, warning it could cost taxpayers more than $850 million over 35 years.

The measure, which passed during the action-packed final days of the lame-duck session, is meant to formalize a practice in which the city has periodically granted full pension benefits to more and more firefighters, said Martwick, whose district includes neighborhoods on Chicago’s northwest side. The state senator says the bill “simply ensures that the city confronts the true costs of its pension obligations,” adding it would help right the state’s financial ship by putting “an end to the irresponsible behavior that put us here in the first place.”

In a statement, the governor says the bill “creates a system that gives all firefighters certainty and fair treatment” and that “hardworking men and women who have earned their pension shouldn’t pay the price for local or state budget challenges.”

Pritzker also noted that a sale of the Thompson Center, which would return the property to the city’s tax rolls, would help Chicago “meet its obligations” and offset the potential financial hit to the city.

Illinois Deputy House Minority Leader Tom Demmer (R-Dixon) blasted the bill signing in a release, saying it “makes a property tax increase inevitable” and is another example of the governor “spending hypothetical revenue by suggesting that the sale of the James R. Thompson Center will be the magic cure for yet another financial problem.”

This month, the state will start soliciting bids from developers on what to do with the Thompson Center, but the COVID-19 crisis has threatened the city’s central business district and clouded the possibility of a quick sale and redevelopment of the block – downtown real estate veterans tell Crain’s nothing is likely to happen there any time soon.

Lightfoot, who has pushed hard against the measure, said in a statement that while “first responders deserve to be appropriately compensated for their work both now and into retirement,” she was disappointed in the governor’s decision to sign “this unfunded mandate into law.”

The number of international homebuyers declined sharply throughout the United States in the past year amidst the global COVID-19 pandemic, according … END_OF_DOCUMENT_TOKEN_TO_BE_REPLACED

Tom Rodeno, 50, a 20-year veteran in representing industrial spaces for Colliers International, based out of the Rosemont office with the title of … END_OF_DOCUMENT_TOKEN_TO_BE_REPLACED

Chicago’s city officials move the deadline for submitting a proposal for the planned casino to October 29, looking for more bidders. Chicago … END_OF_DOCUMENT_TOKEN_TO_BE_REPLACED

A community in western Illinois has officially disbanded its police department over budget concerns. East Galesburg has been without its police … END_OF_DOCUMENT_TOKEN_TO_BE_REPLACED

The officer who died was the first Chicago cop shot and killed in the line of duty this year, Brown said. It's the first line-of-duty shooting … END_OF_DOCUMENT_TOKEN_TO_BE_REPLACED