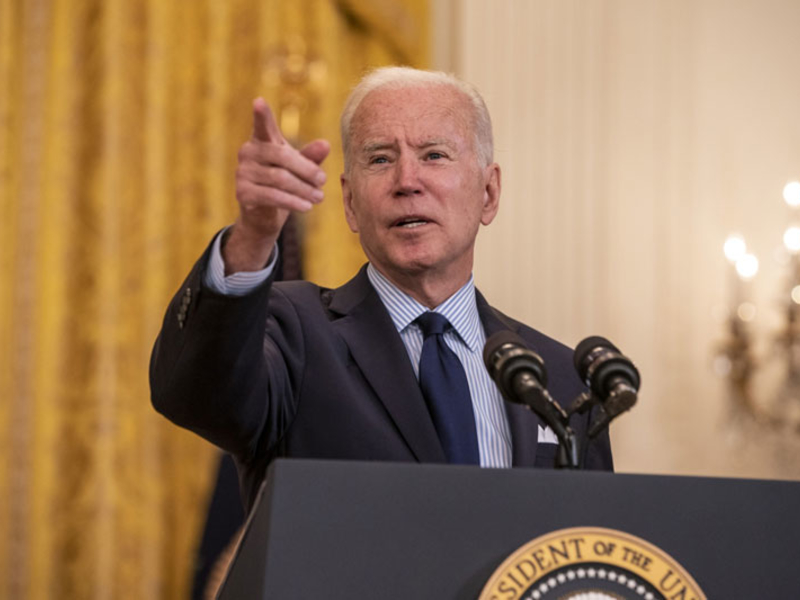 He said money is still being distributed from a $1.9 trillion coronavirus rescue plan he signed in March. “Today’s report just underscores my view of how vital the actions we’re taking are,” he said.

The weak data may give a boost to Biden’s $6 trillion economic agenda by blunting arguments that the stimulus legislation he signed in March, combined with his proposed expenditures for infrastructure and social programs, would spur crippling inflation.

The fate of Biden’s economic plans rests with the narrowly divided Congress. Passing his proposed $4 trillion worth of long-term spending increases and tax credits, spanning infrastructure to social programs including child care and education, will depend on where lawmakers can find compromise.

The jobs report gives Biden a new argument as he seeks support from voters and lawmakers. Employers added 266,000 jobs last month and the jobless rate edged up to 6.1%, the Labor Department said, compared with forecasts for a 1 million increase in payrolls and a drop in unemployment.

Republicans and companies seized on the jobs numbers to blame the extra $300 weekly unemployment benefits extended in March — which run through September — as keeping workers from filling job openings. Biden said there has been “nothing measurable” from the benefits’ impact on job growth.

“Today’s report is a rebuttal of the loose talk that Americans just don’t want to work,” Biden said. “The data shows that more workers are looking for jobs and many can’t find them.”

While he acknowledged that “I know some employers are having trouble filling jobs,” he said most middle-class and working-class Americans that he knows feel that “a job is a lot more than a paycheck” and value the dignity of work.

Biden has opened the door to compromise and hinted he could support a lower increase in the corporate tax rate than he had initially floated.

Labor Secretary Marty Walsh told Bloomberg Television in an interview that under normal circumstances, Friday’s jobs numbers would have indicated a “great month.” But he conceded: “We still have a steep climb, we still have a ways to go.”

Some economists have raised concern that Biden’s proposals could overheat the economy.

Businesses have also criticized the enhanced unemployment-insurance benefits in the relief bill as keeping workers at home and making it tougher for firms to fill vacant positions. It’s an argument Republicans have embraced, though economists have questioned how strong that dynamic is.

“The evidence that large numbers of Americans are choosing to stay at home because unemployment benefits are enough for them is substantially overstated,” said Carl Tannenbaum, chief economist at Northern Trust in Chicago. He pointed out that many states end their support after 27 weeks.

The number of international homebuyers declined sharply throughout the United States in the past year amidst the global COVID-19 pandemic, according … END_OF_DOCUMENT_TOKEN_TO_BE_REPLACED

Tom Rodeno, 50, a 20-year veteran in representing industrial spaces for Colliers International, based out of the Rosemont office with the title of … END_OF_DOCUMENT_TOKEN_TO_BE_REPLACED

Chicago’s city officials move the deadline for submitting a proposal for the planned casino to October 29, looking for more bidders. Chicago … END_OF_DOCUMENT_TOKEN_TO_BE_REPLACED

A community in western Illinois has officially disbanded its police department over budget concerns. East Galesburg has been without its police … END_OF_DOCUMENT_TOKEN_TO_BE_REPLACED

The officer who died was the first Chicago cop shot and killed in the line of duty this year, Brown said. It's the first line-of-duty shooting … END_OF_DOCUMENT_TOKEN_TO_BE_REPLACED