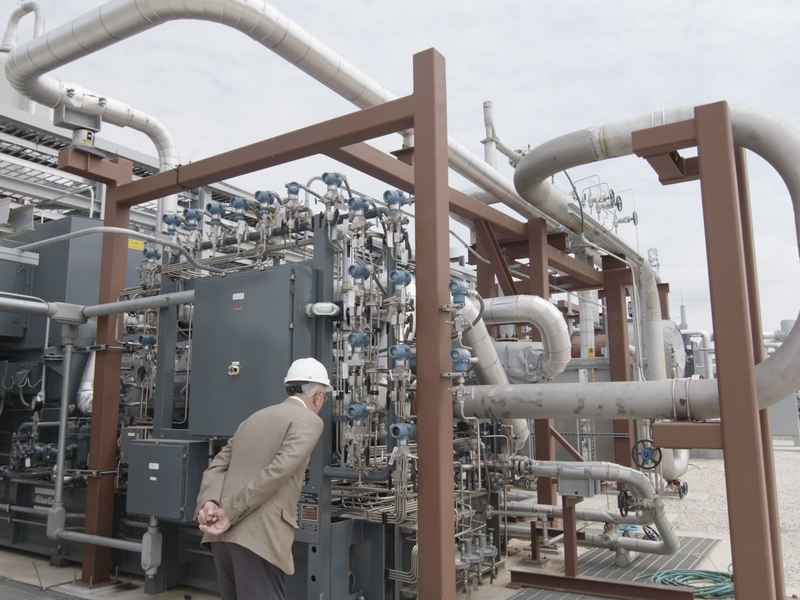 For the other plant, 8 Rivers is working with the Southern Ute Indian Tribe Growth Fund in Colorado. Both projects will be designed and developed this year, which 8 Rivers says requires spending tens of millions of dollars. A final decision on whether to go ahead with the facilities is due in 2022.

Net Power’s technology uses a new kind of turbine to burn natural gas in oxygen, rather than the air. As a result, the plant only produces carbon dioxide and water as a byproduct. The water can be frozen out of the mixture and the pure stream of CO₂ can be buried in depleted oil and gas wells or similar geological structures.

The required oxygen is secured by separating it from the air, which needs energy. But Net Power says its turbine is more efficient so that, on balance, the overall efficiency of the system matches that of an advanced natural-gas power plant that pumps its emissions into the atmosphere. Another upside of using oxygen is that Net Power plants do not produce any nitrogen emissions, which would cause local air pollution.

The startup built a functioning pilot plant in Texas in 2018 that can generate about 25 megawatts of power. The Illinois and Colorado plants will be Net Power’s first commercial-scale units. Each plant will be capable of generating 280 MW of electricity. The Colorado plant is also expected to use air cooling, which Net Power says will cut the amount of water required to zero.

“Big projects take time,” said Cam Hosie, chief executive officer of 8 Rivers. “The most important thing for the rapid adoption of this technology is going to be that the first projects are successful.” Hosie said that about a dozen other Net Power plants are in various phases of development, with some planned to be built outside the U.S.

The Illinois power plant will inject its emissions into an already existing CO₂ well, which currently buries emissions from an ethanol production facility. The Colorado plant hasn’t decided where to bury its emissions, but 8 Rivers says that the site of the power plant is close to a CO₂ pipeline which extends the area available for storing the carbon.

Though the power plant won’t produce any pollution, environmentalists are concerned about the continued use of natural gas. The production and transportation of the fossil fuel does lead to emissions, which companies that rely on natural gas will have to mitigate.

Both plants will have access to a U.S. tax credit that amounts to about $50 for each ton of CO₂ injected into the ground. As in the case of solar and wind power, the credit seeks to subsidize early-stage climate technologies until they can compete with the existing fossil-fuel based incumbents.

Each of the power plants is expected to cost more than $500 million, which 8 Rivers and its partners will look to raise before the investment decision deadline. “The way to get to net-zero emissions with the abundance of natural gas that we have makes Net Power the solution,” said Ron Degregorio, chief executive officer of Net Power.

The number of international homebuyers declined sharply throughout the United States in the past year amidst the global COVID-19 pandemic, according … END_OF_DOCUMENT_TOKEN_TO_BE_REPLACED

Tom Rodeno, 50, a 20-year veteran in representing industrial spaces for Colliers International, based out of the Rosemont office with the title of … END_OF_DOCUMENT_TOKEN_TO_BE_REPLACED

A community in western Illinois has officially disbanded its police department over budget concerns. East Galesburg has been without its police … END_OF_DOCUMENT_TOKEN_TO_BE_REPLACED

The officer who died was the first Chicago cop shot and killed in the line of duty this year, Brown said. It's the first line-of-duty shooting … END_OF_DOCUMENT_TOKEN_TO_BE_REPLACED