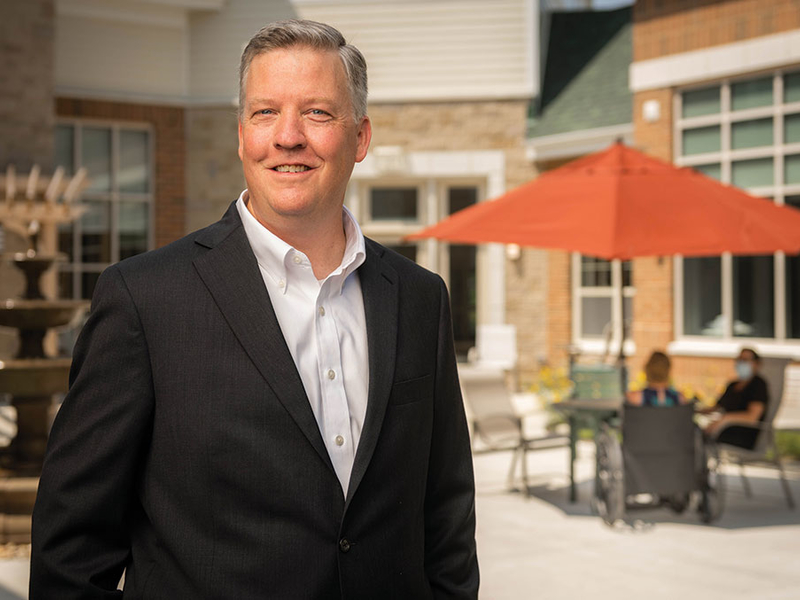 The expected consolidation wave comes amid an outbreak that has sickened about 80,000 residents at long-term care facilities in Illinois and killed more than 10,000. Though vaccines and infection control measures have lately helped prevent the sort of outbreaks that marked the darkest days of the lockdown era, health care providers are now grappling with a new and more contagious COVID variant. Add in the lingering fear of contagion among families weighing the pros and cons of caring for elder loved ones at home versus in a facility, and it’s little wonder that nursing homes report that they are on life support.

“Our census is recovering, but it’s recovering so slowly,” says Donna Sroczynski, president of operations at Symphony Care Network, which has 28 facilities in Illinois, Indiana, Michigan and Wisconsin.

Sroczynski says the average number of people that Symphony serves per day is down about 20 percent, compared with pre-pandemic levels. At the same time, expenses are up at least 30 percent due to hiring additional staff, testing requirements and securing personal protective equipment.

While COVID-19 brought new challenges, it also exacerbated long-standing issues facing an industry tasked with caring for some of the nation’s most vulnerable residents.

In fact, only one-quarter of nursing homes and assisted living communities nationwide are confident they’ll last a year or more, according to a recent survey of 738 facilities by the American Health Care Association and National Center for Assisted Living. While most nursing home operators are privately held and therefore keep their revenue and profit margins under wraps, more than half of those who responded to this survey reported they are operating at a loss.

According to a separate analysis by the trade groups, the nursing home industry has projected that it will lose $22.6 billion in revenue this year and that 1,670 facilities will close or merge.

Meanwhile, publicly traded Brookdale Senior Living posted a net loss of $108 million during the first quarter of 2021, compared with net income of $369 million during the same period a year earlier. And revenue fell 26 percent to $749 million in the quarter. Brentwood, Tenn.-based Brookdale is the largest senior living company in the country, with about 700 assisted living, skilled nursing and other locations in 41 states, including 11 communities in the Chicago area.

Occupancy rates at nursing homes have steadily declined for decades, as assisted living facilities and home health have become more popular among individuals requiring a lower level of care. But nursing home occupancy dropped sharply during the pandemic as hospitals postponed elective surgeries, which meant fewer referrals for post-acute care.

Meanwhile, to prevent outbreaks when COVID tests were scarce, many nursing homes refused to admit people who might have been exposed to the virus during a hospital stay. And people with access to home-based services avoided high-risk congregate living settings for fear of infection.

Even before COVID-19 started spreading, the number of long-term care facilities in Illinois had declined nearly 10 percent to 913—alongside a 14 percent drop in admissions—from 2015 to 2019, according to the latest state data.

Hartman says that four association members have shuttered in the last few months alone and that even more facilities are expected to close through the end of 2021, particularly as federal COVID relief funds run out.

“The pandemic really sort of laid bare just how problematic the staffing shortage in nursing homes is because it has been there for decades, but it just got worse during COVID,” says Tamara Konetzka, a health economist at the University of Chicago. The “physically and emotionally demanding” jobs often come with no benefits or sick pay, she adds.

Many operators say they’re having to dig deep to incentivize workers, noting that low Medicaid rates don’t cover the cost of doing business. However, lawmakers and advocacy groups have called for more transparency during the pandemic around just how much facilities are spending on staffing and quality. For example, many nursing homes keep operations under a separate entity than real estate and other valuable assets, which can shield the companies from liability.

To prevent nursing homes from profiting while staffing levels remain low and three or more residents are packed into each room, lawmakers are looking to link new funding to specific safety and quality metrics that benefit residents and reduce racial health disparities.

The Illinois Department of Healthcare & Family Services, which spends more than $2.5 billion annually on nursing home services for about 45,000 Medicaid beneficiaries, supports the proposal. The government health insurance program for the poor and disabled covers the majority—about 60 percent—of nursing home care provided in the state each year.

Nursing home operators are also bracing for a flood of COVID-related lawsuits.

Law firm Levin & Perconti is representing families affected by the COVID-19 outbreak at the state-run LaSalle Veterans’ Home late last year, during which more than 200 veterans and staff tested positive for the virus and 36 veterans died, according to an April report by the Illinois Department of Human Services’ Office of the Inspector General.

And an estimated 1,000 lawsuits against nursing homes are in the works, according to Healthcare Heroes Illinois, an advocacy group raising awareness around immunity and liability issues.

“This is an existential threat to the industry,” says Healthcare Heroes spokesman Paul Gaynor. “And the pandemic isn’t over.”

Sroczynski declines to say whether any lawsuits have been filed against Symphony, which is among operators that experienced outbreaks during the pandemic. But she notes that “the whole industry in Illinois is being stalked by predatory lawyers.”

Amid all the uncertainty, COVID relief funds have been a lifeline for nursing home operators during the pandemic.

HFS last year distributed $359 million in CARES Act funding to long-term care facilities, which also got about $520 million directly from the federal government. And an additional $75 million was recently allocated to the facilities.

“As those dollars run out, you’ll start to see more operators close their doors,” says Hartman. Even though pre-pandemic occupancy rates in Illinois hover below the national average, facility closures in certain areas prevent residents from getting care close to home and family, he says.

Some struggling facilities will look to find a partner that can help keep them afloat. For example, Kevin McGee, CEO of two-community Smith Senior Living, says the company has been approached by two local facilities looking for a buyer.

The number of international homebuyers declined sharply throughout the United States in the past year amidst the global COVID-19 pandemic, according … END_OF_DOCUMENT_TOKEN_TO_BE_REPLACED

Tom Rodeno, 50, a 20-year veteran in representing industrial spaces for Colliers International, based out of the Rosemont office with the title of … END_OF_DOCUMENT_TOKEN_TO_BE_REPLACED

A community in western Illinois has officially disbanded its police department over budget concerns. East Galesburg has been without its police … END_OF_DOCUMENT_TOKEN_TO_BE_REPLACED

The officer who died was the first Chicago cop shot and killed in the line of duty this year, Brown said. It's the first line-of-duty shooting … END_OF_DOCUMENT_TOKEN_TO_BE_REPLACED