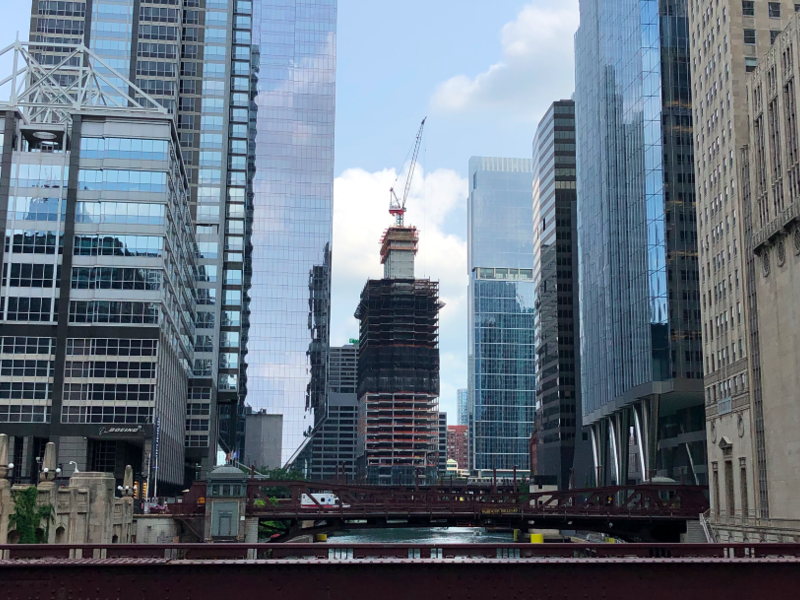 If the deal is completed, it would mark a major victory for the tower’s developer, Houston-based Hines, which is slated to finish the 1.2 million-square-foot building in 2023 and has an anchor tenant in San Francisco-based Salesforce, which is leasing around 500,000 square feet in the building.

The lease would also stand out as a massive new commitment to office space at a time when many companies—including many law firms—are re-evaluating their workspace needs after adjusting to life with people working remotely during the COVID-19 pandemic. Amid that eroding demand, the amount of available office space in the central business district has surged this year to a record high.

Kirkland’s lease would be the largest downtown office lease since the firm signed a deal for 650,000 square feet at its current home on LaSalle Street, where it moved its office when that 60-story building opened in 2009. That deal was also with Hines, which developed the 1.3 million square-foot tower.

If Kirkland relocates, it would open up a big block of vacancy for Newport Beach, Calif.-based Irvine, which has owned 300 N. LaSalle since 2014. The law firm’s lease for about half of the building runs through February 2029, but the firm has a termination option it can exercise in 2025 with at least two years’ notice, according to a Fitch report on Irvine’s loan on the property, which was packaged with other mortgages and sold off to commercial mortgage-backed securities investors.

The tower posted net cash flow before debt service of $44.2 million in 2019, the most recent data available, according to a Bloomberg report tied to the loan.

An Irvine spokesman couldn’t be reached.

Some of the city’s largest office tenants have departed or are soon to leave older buildings for newly-built office towers, including Bank of America and BMO Harris Bank. Kirkland’s move would stand out as a firm leaving behind a relatively new tower, though many companies and firms downtown are facing the challenge of reconfiguring their office layouts for a post-COVID world, even if they are in a modern building.

Kirkland’s lease negotiations come as the firm’s business has surged. Its revenue rose to $4.8 billion in 2020, the most of any law firm worldwide. The firm has 2,900 lawyers—almost three times what it had 15 years ago—and more than 700 attorneys in Chicago, according to its website.

The number of international homebuyers declined sharply throughout the United States in the past year amidst the global COVID-19 pandemic, according … END_OF_DOCUMENT_TOKEN_TO_BE_REPLACED

Tom Rodeno, 50, a 20-year veteran in representing industrial spaces for Colliers International, based out of the Rosemont office with the title of … END_OF_DOCUMENT_TOKEN_TO_BE_REPLACED

A community in western Illinois has officially disbanded its police department over budget concerns. East Galesburg has been without its police … END_OF_DOCUMENT_TOKEN_TO_BE_REPLACED

The officer who died was the first Chicago cop shot and killed in the line of duty this year, Brown said. It's the first line-of-duty shooting … END_OF_DOCUMENT_TOKEN_TO_BE_REPLACED