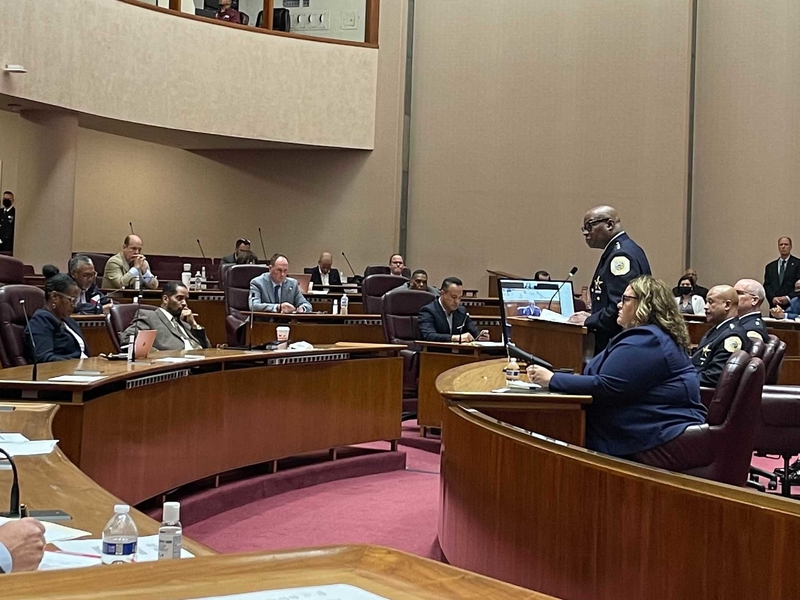 “This is madness. Our courts are out of control,” Brown said. “These decisions are harming our city, harming our children, our babies, and this is personal for us.”

Brown said the man responsible for a June murder-suicide in Woodlawn was out on electronic monitoring, as was one of the men charged with the murder of Jaslyn Adams in a McDonald’s drive through, and another man charged with a shooting and carjacking in Lawndale.

“This is happening because there is too much advocacy for violent offenders, and too little consequences for their behavior in the courts,” he continued. “There is an explosion of violent offenders being released back into our communities.”

Mayor Lori Lightfoot agreed with Brown in a press conference following the meeting, saying while Cook County Jail should not serve as a “debtors’ prison” for those who cannot afford bail, far too many dangerous people that have been let out on electronic monitoring, with too few people monitoring their activities. The mayor cited data provided by Cook County Sheriff Tom Dart as of Apr. 19, 2021, saying those out on electric monitoring include 573 people charged with aggravated unlawful use of a weapon, 269 armed habitual criminals, 167 charged with felony theft, 164 charged with robbery, 104 charged with criminal sexual assault, and 91 charged with murder .

“There has to be accountability,” Lightfoot said. “We have to think about it as the entire ecosystem that it is.”

It’s far from the first time he and the mayor have pointed to Chief Judge Evans and State’s Attorney Kim Foxx as contributors to the city’s crime rate in recent years. Both Evans and Foxx have pushed back, arguing pre-trial release reforms have not made the city more dangerous.

Ald. Raymond Lopez, 15th, who led the charge to hold Friday’s meeting to press Brown on plans for the deadly weekend, said Brown was full of contradictions, by suggesting CPD needed to work more closely with county partners, then blasting them in his opening remarks. “We can’t control the State’s Attorney or the courts, we can control the department,” he said.

Other aldermen pointed to a Loyola study analyzing data between 2013 and 2019 that concluded pretrial release reforms – which took effect in 2017 – did not cause an increase in violence in 2018 or 2019, and didn’t increase the likelihood that defendants would commit new crimes while awaiting trial.

Brown said he was not familiar with the study, but said “Chicago police officers are the advocates for victims.” He also said he was similarly unfamiliar with a series of emails involving former Deputy Mayor for Public Safety Susan Lee warning the mayor’s office against using the narrative that the a revolving door of criminals being released pre-trial was driving violence.

The superintendent also took aim at Council members, saying that Friday’s special meeting took up “critical scheduled time for our leadership team to discuss deployment decisions” ahead of July 4, which is  “our most challenging weekend of the year.”

Lightfoot said her administration is “in regular conversation with our partners at the county,” including Board President Toni Preckwinkle, State’s Attorney Kim Foxx, Chief Judge Timothy Evans, and Dart “every couple weeks or so,” and the group is looking for “common ground.”

The number of international homebuyers declined sharply throughout the United States in the past year amidst the global COVID-19 pandemic, according … END_OF_DOCUMENT_TOKEN_TO_BE_REPLACED

Tom Rodeno, 50, a 20-year veteran in representing industrial spaces for Colliers International, based out of the Rosemont office with the title of … END_OF_DOCUMENT_TOKEN_TO_BE_REPLACED

A community in western Illinois has officially disbanded its police department over budget concerns. East Galesburg has been without its police … END_OF_DOCUMENT_TOKEN_TO_BE_REPLACED

The officer who died was the first Chicago cop shot and killed in the line of duty this year, Brown said. It's the first line-of-duty shooting … END_OF_DOCUMENT_TOKEN_TO_BE_REPLACED