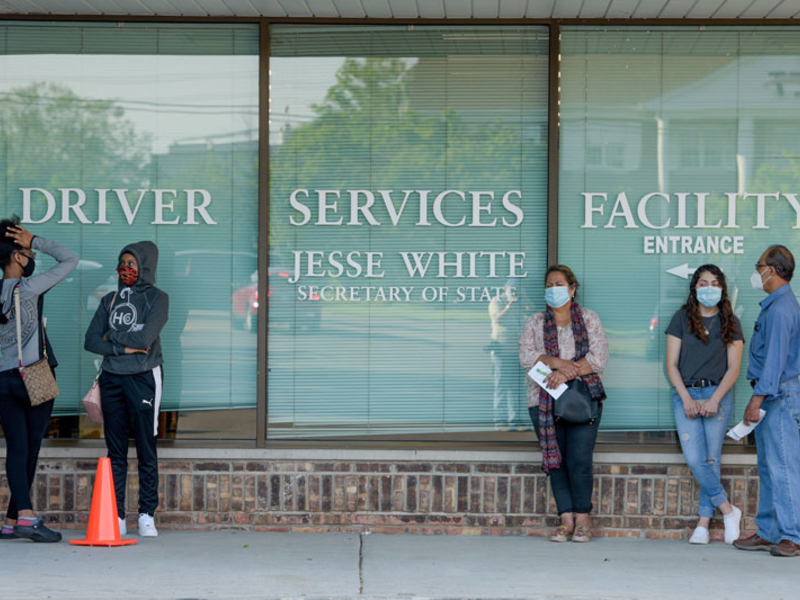 So it goes in the race for a job that provides huge political exposure with limited job responsibilities to its occupant: The secretary issues driver’s licenses, keeps business incorporation records and serves as the state’s librarian. It’s a job that White has held since 1998, during which time he routinely was the state’s top vote-getter.

Giannoulias took a break from public life after losing a 2010 U.S. Senate race to Republican Mark Kirk, but now he is back with a vengeance, arguably making him the early front-runner.

His family bankrolled him with $2.3 million in early loans that he’s amplified with $1.3 million in his own fundraising just in the first quarter, leaving him with more than $2 million in the bank. He’s used that to begin building a field and media operation, for instance becoming the first candidate to have a paid ad up.

Some insiders clearly have noticed, with Giannoulias winning endorsements from Garcia and, notably, the Illinois Council of SEIU.  “These early endorsements are big news, and, more importantly, they demonstrate the momentum that our campaign is experiencing and our success at building a broad-based coalition of support from across the state,” Giannoulias said in an email to backers.

The message seems clear: Get on the bandwagon before it leaves. But other candidates—all of them Democrats, so far—are resisting.

“This campaign is just starting,” said Valencia in a phone interview. “(Giannoulias) must feel really nervous to be trying to shut this down this early.”

Valencia points to her own list of endorsers, including U.S. Rep. Lauren Underwood, D-Naperville, and to the co-chairs of her campaign and fundraising. Included: former Obama White House senior staffer Tina Chen, longtime party activist Bettylu Saltzman and ex-mayoral hopeful Gery Chico. Valencia reports raising $220,000 in the last quarter, with $428,000 in the bank.

Dowell, in a phone interview, noted that she was the last person to enter the Democratic contest. Given that, her campaign donations have picked up considerably from the $91,000 she raised in the first quarter, Dowell suggested, without giving any updated numbers.

“I’m sure he’d like to clear the field,” Dowell said of Giannoulias. “I’m the only person in the race that has a record of consistently delivering for many communities. . . .And I don’t view this job as a stepping stone to something bigger.”

The fourth Democrat known to be running, state Sen. Mike Hastings of Tinley Park, was not available to comment, but he has his own labor backing, from the Chicago region Carpenter’s Union. Hastings also has a somewhat different story to tell as an Iraq war veteran and Illinois Senate majority caucus whip.

Despite the early maneuvering, “There’s a lot of uncertainty now in the body politic,” cautions Democratic strategist Tom Bowen.

After COVID and the latest Donald Trump antics, no one really knows what kind of leaders voters are seeking, Bowen says. And with the Illinois primary next year to be delayed from March to June, the decision will come later than usual.

In the end, he says, in a race for an office without a lot of exciting issues, the winner may be the candidate with the best personal tale to tell.

The number of international homebuyers declined sharply throughout the United States in the past year amidst the global COVID-19 pandemic, according … END_OF_DOCUMENT_TOKEN_TO_BE_REPLACED

Tom Rodeno, 50, a 20-year veteran in representing industrial spaces for Colliers International, based out of the Rosemont office with the title of … END_OF_DOCUMENT_TOKEN_TO_BE_REPLACED

A community in western Illinois has officially disbanded its police department over budget concerns. East Galesburg has been without its police … END_OF_DOCUMENT_TOKEN_TO_BE_REPLACED

The officer who died was the first Chicago cop shot and killed in the line of duty this year, Brown said. It's the first line-of-duty shooting … END_OF_DOCUMENT_TOKEN_TO_BE_REPLACED