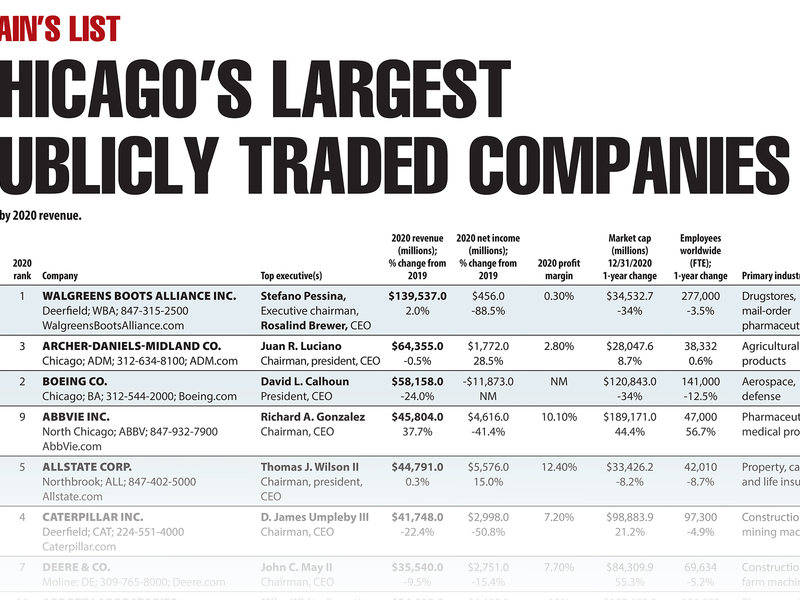 Likewise, employment at companies on the list fell by 4.1 percent during 2020, compared to a 2.1 percent increase on last year’s list.

Additionally, Boeing lost its recurrent No. 2 spot, dropping down to No. 3 with a 24 percent decline in revenue. Boeing’s revenues began declining before the pandemic: This comes after a 24.3 percent drop from 2018 to 2019.

There were nine newcomers on the list, three of which saw the greatest increase in revenue from 2019. Rush Street Interactive, which operates online gaming and casino sites, saw a whopping 337.4 percent increase. GoHealth and Oak Street Health grew 62.6 and 58.6 percent, respectively. Of the remaining newcomers, Azek, GCM Grosvenor, Whole Earth Brands and Kingsway Financial Services also saw their revenues grow, while those of Pactiv Evergreen and Surgalign Holdings declined.

Despite increased unemployment in the economy during 2020, employment at AbbVie and FreightCar America grew by 56.7 and 34.9 percent, respectively. Pharmaceutical company Assertio Holdings, however, saw a decrease in employment of 78.4 percent. Assertio announced a restructuring plan to take effect in December 2020 to reduce costs by $45 million; it expects to recognize $8 million to $10 million in severance charges.

The 136 companies on this year’s Chicago’s Largest Publicly Traded Companies list each had revenue of at least $50 million in 2020. The list—built with data compiled by S&P Global Market Intelligence—also includes net income, profit margin, market capitalization and full-time-equivalent employee totals, and some data points include percentage changes from the prior year. The complete list in Excel is available exclusively to Crain’s Data Members and is available in our Data Center.

The number of international homebuyers declined sharply throughout the United States in the past year amidst the global COVID-19 pandemic, according … END_OF_DOCUMENT_TOKEN_TO_BE_REPLACED

Tom Rodeno, 50, a 20-year veteran in representing industrial spaces for Colliers International, based out of the Rosemont office with the title of … END_OF_DOCUMENT_TOKEN_TO_BE_REPLACED

Chicago’s city officials move the deadline for submitting a proposal for the planned casino to October 29, looking for more bidders. Chicago … END_OF_DOCUMENT_TOKEN_TO_BE_REPLACED

A community in western Illinois has officially disbanded its police department over budget concerns. East Galesburg has been without its police … END_OF_DOCUMENT_TOKEN_TO_BE_REPLACED

The officer who died was the first Chicago cop shot and killed in the line of duty this year, Brown said. It's the first line-of-duty shooting … END_OF_DOCUMENT_TOKEN_TO_BE_REPLACED