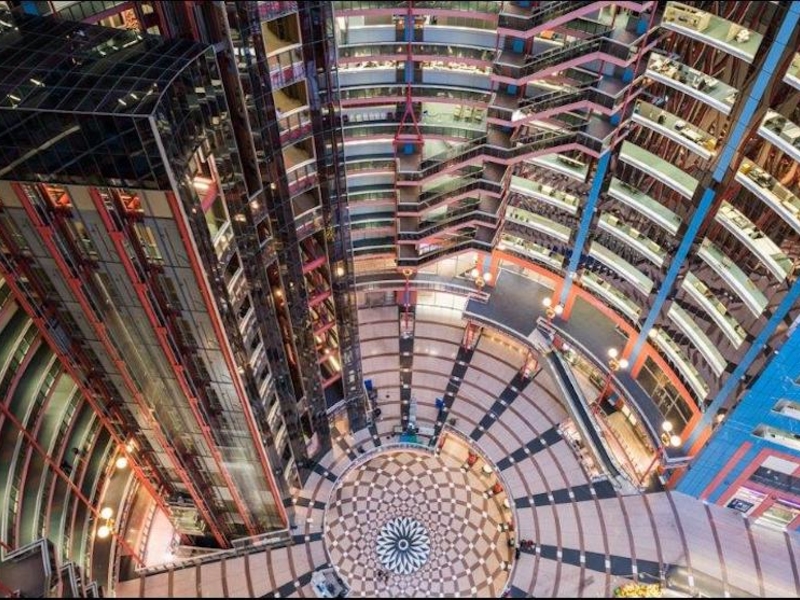 Gov. Pritzker’s office wants to sell the colorful 17-story building that has been derided as functioning poorly since it opened in 1985. Preservationists and others see getting the building a spot on the National Register as a step toward unlocking preservation tax credits that would make rehabbing the building financially feasible, preventing demolition of one of the late architect Helmut Jahn’s most dramatic buildings.

In May, John Murphy, whose firm’s $140 million redevelopment of the old Cook County Hospital included in its financing stack about $27 million in tax credits, told Crain’s, “but for the tax credits, the rehab would not have happened.”

Without the possibility of tax credits, potential buyers may find that only demolition is cost-effective on the site, Murphy and Lisa DiChiera, director of advocacy at Landmarks Illinois, both told Crain’s in May.

It’s a race against the clock, as the National Trust process could take several months and Illinois officials have set Aug.16 as the deadline for offers on the 1.2 million-square-foot building that sits on three acres on Randolph Street.

The vote today by the Historic Sites council could move the nomination forward to the National Parks Service, which maintains the National Register. But that’s not guaranteed, because both the State Historic Preservation Office and the Central Management Services (CMS), the agency handling the sale, are both on record as opposing a National Register listing for the building.

Officials of the two agencies could not be reached for comment. Meg Kindelin, the Elmhurst architect who is chair of the historic sites board, made up of architects, archeologists, historians and preservationists, did not immediately respond to a request for comment.

Neither did Kelly Purvis, a Glen Ellyn planning officer who was one of two members of the historic sites board voting against the National Register nomination.

“I wouldn’t say they broke ranks,” said Jonathan Solomon, a partner in Preservation Futures, the group that is shepherding the nomination. “They’re an independent commission, and I would say we’re thrilled that they didn’t bow to political pressure” from the two agencies.

If so, Solomon said, the coalition of advocacy groups that have been working on the nomination could decide to take it to the national register on their own, without state support. The coalition includes Solomon’s group, Landmarks Illinois Preservation Chicago and others.

“We are certain that ultimately the building will be listed on the National Register,” Solomon told Crain’s. “It’s just a matter of how much more obstruction we face.”

The number of international homebuyers declined sharply throughout the United States in the past year amidst the global COVID-19 pandemic, according … END_OF_DOCUMENT_TOKEN_TO_BE_REPLACED

Tom Rodeno, 50, a 20-year veteran in representing industrial spaces for Colliers International, based out of the Rosemont office with the title of … END_OF_DOCUMENT_TOKEN_TO_BE_REPLACED

A community in western Illinois has officially disbanded its police department over budget concerns. East Galesburg has been without its police … END_OF_DOCUMENT_TOKEN_TO_BE_REPLACED

The officer who died was the first Chicago cop shot and killed in the line of duty this year, Brown said. It's the first line-of-duty shooting … END_OF_DOCUMENT_TOKEN_TO_BE_REPLACED