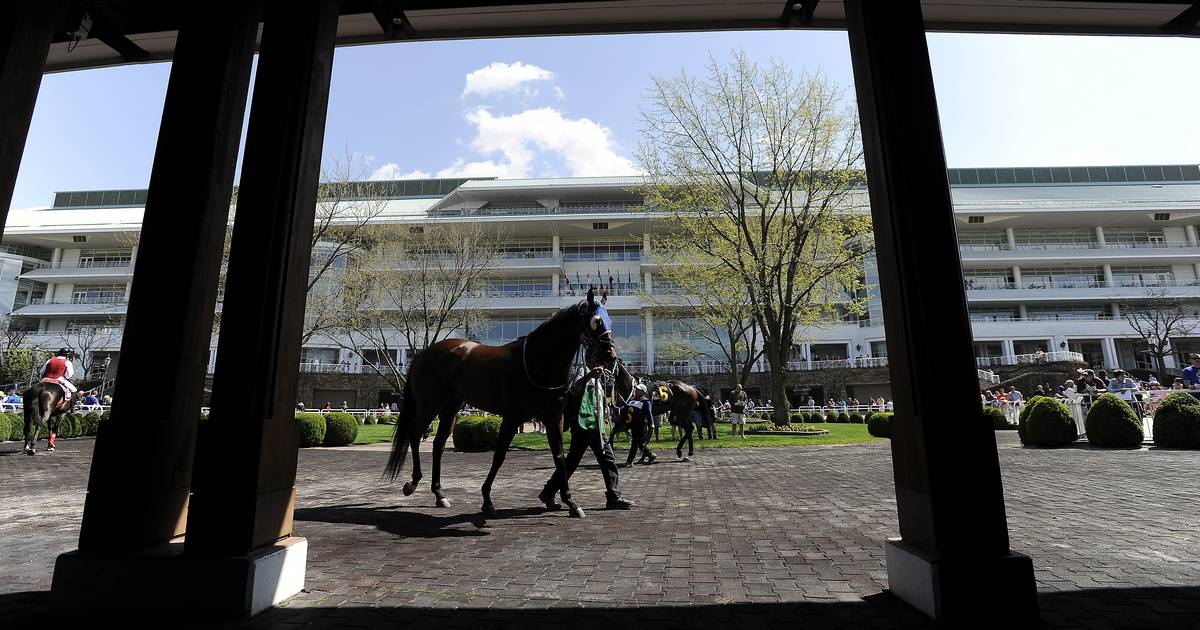 As redevelopment proposals for the 326 acres that’s home to Arlington Park are received and reviewed, Arlington Heights Mayor Tom Hayes says everything remains a possibility — including a Chicago Bears stadium or the prospect that live horse racing is preserved in some form.

“They’re both on the table for me. We’re interested in exploring those opportunities and others,” said Hayes, who has been involved in ongoing discussions with track owner Churchill Downs Inc. and real estate broker CBRE, which listed the track for sale in February.

Hayes was reacting to a published report Wednesday that a senior vice president for Chicago’s NFL franchise would not deny long-held rumors over the team’s possible move to Arlington Park. When asked about the possibility by Crain’s Chicago Business — including whether talks have begun with Churchill Downs — a Bears spokesman said “our priority is about Soldier Field.”

A stadium for the Bears in Arlington Heights has been kicked around for decades. Team founder George Halas, unhappy with Soldier Field in Chicago and the city’s cooperation over a new stadium, first pursued one next to Arlington Park in 1975. A 35-year lease was in the works, but a tumbling interest rate market killed the deal. The Bears in later decades considered deals in Hoffman Estates, Elk Grove Village, Warrenville, Naperville and Aurora.

Hayes declined to detail the specific redevelopment plans he’s heard of or how many there might be. But he confirmed the village’s community development department has been fielding calls from prospective developers. CBRE also has been talking to parties interested in the site, Hayes said.

“From what I’m hearing, there is a great deal of interest in this property from a lot of different individuals and groups being put together for some very exciting possibilities,” Hayes said. “I do expect information will come out sometime — perhaps this summer — about some possibilities that are at least conceptual plans that CBRE, Churchill and the village might be very interested in.”

Horse trainer Mike Campbell, president of the Illinois Thoroughbred Horsemen’s Association, on Wednesday told the Daily Herald that he’s serving as a facilitator with a group of investors who hope to preserve live horse racing at the track. Their proposal includes the addition of industrial, residential and entertainment components, plus a hotel, on the sprawling property, Campbell said.

Campbell hopes to meet with Hayes and the village staff, then reveal their conceptual plans publicly, in the coming weeks.

“Some say, ‘It’s (Churchill’s) property. They can choose what to do with it. This is America.’ I agree with that. But the municipality has a lot of say over this. They control what usage occurs on that property,” said Campbell, whose association represents horse owners and trainers at Arlington. “They don’t know what a loss it’s going to be until they see that grandstand knocked down. It’s going to be an eyesore.”

Campbell’s comments follow a similar revelation by fellow horse trainer Larry Rivelli in a Sunday Daily Herald story that he’s trying to organize a group of trainers, owners and investors to buy the historic track in hopes of making it “shine like the old days.”


Churchill Downs CEO Bill Carstanjen said last Thursday that officials will evaluate the proposals as they come in, then determine next steps.

“I think the ultimate conclusion of that process is something I can’t responsibly predict for you because we’ll have to see the nature of the bids, and if the property gets bidded, split up between multiple bidders, or if it’s a single bidder, et cetera,” Carstanjen said on a quarterly earnings call.

Based on Carstanjen’s previous statements, Hayes anticipates this Arlington horse racing season — which starts Friday — to be the last under Churchill ownership. But the mayor is still holding on to the possibility that horse racing could continue under a new owner.

“It would be a shame to have to tear down that beautiful facility,” he said.

The number of international homebuyers declined sharply throughout the United States in the past year amidst the global COVID-19 pandemic, according … END_OF_DOCUMENT_TOKEN_TO_BE_REPLACED

Tom Rodeno, 50, a 20-year veteran in representing industrial spaces for Colliers International, based out of the Rosemont office with the title of … END_OF_DOCUMENT_TOKEN_TO_BE_REPLACED

A community in western Illinois has officially disbanded its police department over budget concerns. East Galesburg has been without its police … END_OF_DOCUMENT_TOKEN_TO_BE_REPLACED

The officer who died was the first Chicago cop shot and killed in the line of duty this year, Brown said. It's the first line-of-duty shooting … END_OF_DOCUMENT_TOKEN_TO_BE_REPLACED